Putting a cap on humour

The fact remains, however, that around Navratri and dandiya nights, the sales of birth control actually shoot up. 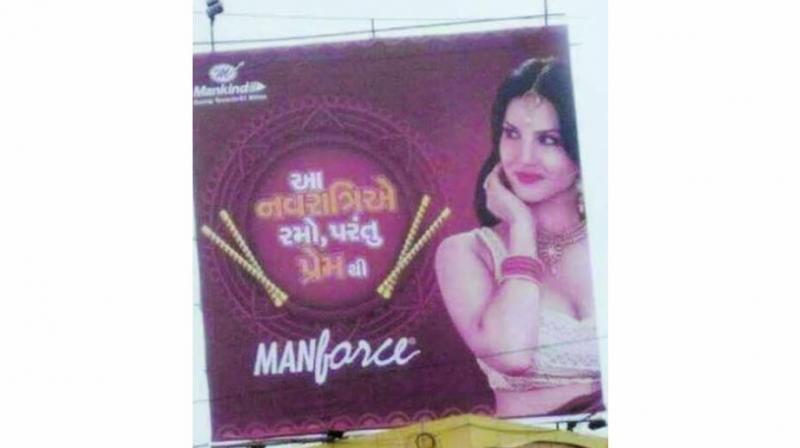 While condom advertisements definitely see a rise during this time, they usually avoid addressing the festival itself.

Sunny Leone’s Navaratri condom ad for Manforce condoms has stirred up controversy, to the point where a letter of objection has been written to the government. The ad, which is a hoarding, features Sunny all decked up in Navratri grandeur, with dandiya sticks in the background and a tagline that says, “Aa Navratri a ramo, parantu premthi —Play but with love, this Navratri.”

The ad has caused so much stir that Hindu groups in Surat have gone on protest, and have even threatened to escalate matters if all hoardings are not taken down immediately.

The fact remains, however, that around Navratri and dandiya nights, the sales of birth control actually shoot up. So much so that it has become thing of urban legends. It’s the time for condom sales to surge as much as 25 to 50 per cent for some popular brands, and also the time when condom brands start more aggressive advertising, especially in Gujarat, where the demand is the highest.

However, when the ad featuring Sunny mentioned the same thing in a tongue-in-cheek manner, certain factions in Gujarat were quick to take offence. This tendency to shy away from advertising condoms in the context of Navratri probably comes from the fact that India, a country of much diversity, is also a country of many prejudices, says advertising expert Alyque Padamsee. “The ad has a humorous concept, meant to be taken with a light heart. It has a very obvious double meaning. However, the ad makers needed to be aware of the fact that this is not a country with a good sense of humour,” he explains.

Creative director, copy, of Tailor advertising Gopal M.S. says that it may be due to the fact that Manforce has used Sunny as its brand ambassador that people have got someone to target their hatred towards. “Most condom ads have models who are not that well-known. Here you have Sunny, who is a celebrity today and also happens to have worked in the porn industry at one point. That in itself, would be offensive to some of the more conservative factions and since they have a face to direct their hatred towards, they are that much more aggressive,” he explains.

While condom advertisements definitely see a rise during this time, they usually avoid addressing the festival itself. “It is not directly a part of Navratri even though it has a rather bizarre connection with the festival. Also people nowadays are quick to take offence, so while the ad itself is funny, their target audience, which is the Gujarati community, would be bound to take offence here. However, by doing that, they have now come into the limelight as well. This type of outrage advertising has lately come into play where people simply want to catch the audience’s attention in any way they can. In that sense, this ad is successful,” adds Gopal.

Whether it is a good advertising move or not, the stigma around sex and safe sex needs to be removed, says actress Pooja Bedi, who was one of the first actresses to model for a condom brand. “Condoms are a need of the hour, since people around the country are having premarital sex. You can develop an ostrich-like attitude towards it, or you can actually try to create awareness around it. If Navratri is a time around which people have more sex, what’s the harm in propagating a message about safe sex? This stigma around the subject is actually dangerous,” she cautions.

Alyque adds that our culture has never banned sex to start with. “You only have to look at the temples of Khajuraho and the sculptures there, or to read the Kamasutra to know that sex is an intrinsic part of Indian culture. However, prejudice creeps into every facet of religion and hence, something so natural is frowned upon,” he explains.

Pooja goes further to add that advertising for safe sex is perhaps something the country needs. “Since safe sex is the need of the hour, condom advertisements are actually good for the country at large, and definitely not something to be frowned upon,” she signs off.