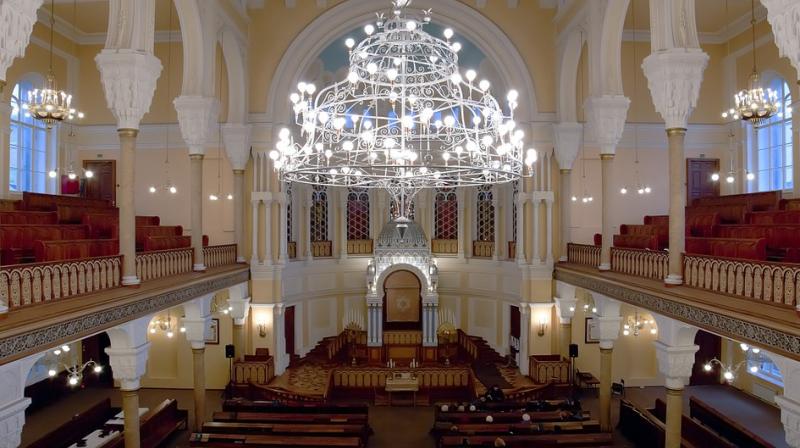 Built in stunning Moorish Revival style in 1873, the Rumbach will be re-established for religious observance and also act as a cultural center with concerts and exhibitions. (Photo: Representational/Pixabay)

Budapest: Tamas Irsai was a teenager when he last sang in the choir in Budapest’s Rumbach synagogue during World War Two, before most Hungarian Jews were deported to death camps.

Irsai survived the Holocaust but the great majority of Hungarian Jews, including many of his relatives and friends, did not. Under Communist rule, more Jews emigrated and the synagogue finally ceased to be a place of worship, its last rabbi leaving Hungary, after Soviet tanks crushed a 1956 uprising.

Since the 1989 fall of communism, however, Jewish community life has revived. The community now numbers about 100,000, with new schools and renovated synagogues - including Rumbach which will reopen early next year after decades of neglect during which pigeons moved in.

Built in stunning Moorish Revival style in 1873, the Rumbach - one of Budapest’s most prominent synagogues - will be re-established for religious observance and also act as a cultural center with concerts and exhibitions.

It is a dream come true for Irsai. “This temple, this community gave me the nicest experiences that a young man could have. I had my bar mitzvah here,” said Irsai, now 89, looking around in the splendidly restored, ornate building.

“It was a very difficult period (during World War Two)...My friend’s parents, whom I knew well, were shot into the Danube (by Hungarian Nazis),” he said, struggling to keep back tears.

But there were happy moments, too, singing in the Rumbach synagogue choir.

“We wanted to watch the girls but we had to stand opposite the Torah cabinet and we were not allowed to turn round. But we wanted to flirt with the girls so we always brought mirrors with us,” Irsai said, smiling. “My girlfriend always sat up there (in the gallery), she watched me and I watched her.”

The synagogue is situated amid chic new restaurants and bars that have turned Budapest’s former Jewish ghetto into one of the capital’s most popular nightlife districts.

It will also house a coffee shop where visitors will have a chance to taste “flodni”, the traditional, rich Jewish cake with five layers of dough and four fillings - poppy seed, apple, walnut and plum jam.

“Since the (conservative) community that built this synagogue and prayed here does not exist anymore, it will not be a synagogue for just one type of community but will be open for all Jewish communities living in Budapest and arriving in Budapest,” said Henriett Kiss, who led the renovation project.