A Facebook user recorded the beautiful moment when a dog was seen pushing his owner’s wheelchair on the streets in Philippines. 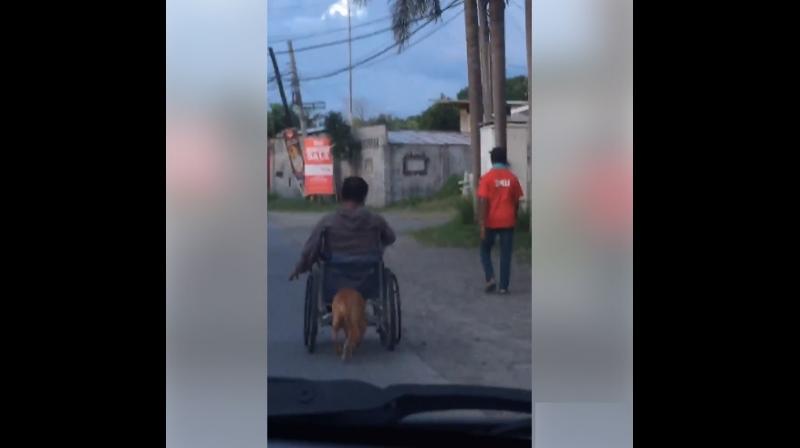 The video shows Digong using his head and snout to push his master's wheelchair on the road.

A dog is indeed a man’s best friend, as exemplified by a video doing the rounds on social media, where a Facebook user recorded the beautiful moment when a pooch was seen pushing his owner’s wheelchair on the streets in Philippines.

The video has managed to touch a chord with hundreds on social media.

Misis Faith L Revilla, a student pursuing her MBA degree from the University of Mindanao recorded the incredible scene and shared it on her Facebook wall on June 30.

Taking to Facebook, she wrote, “Heartwarming scene of a dog’s unconditional love towards its master. Just this ordinary afternoon, we felt blessed to have witnessed this extra ordinary sight of an amazing creature helping its master manoeuvre his wheelchair along seminary drive.”

She further added, “I’m out of words to describe my emotions right now.”

According to Metro, the man in the wheelchair is Danilo Alarcon, 46, who suffered a spinal injury during a motorcycle accident years ago. He couldn't walk post the accident. His dog, Digong, has been with him since birth.

The video shows Digong using his head and snout to push his master's wheelchair on the road.

According to Metro, Revilla pulled over to chat with Danilo and they later took him for lunch at an all-you-can eat buffet.