Nandi masi was an inveterate traveller who was bitten by wanderlust and loved to go to the most unusual, remote even, places. 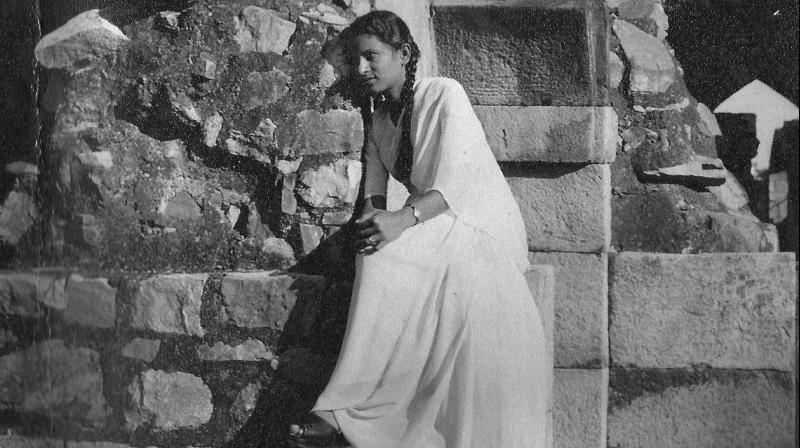 What do you say about the woman who stitched the first piece of cloth you wore as a newborn? The woman who forsake her bus ticket money and walked so that she could bring you a colouring book that you asked for as a child? What can you say about the woman who helped you choose your first saree? Who lend you her saree when some ladkawalas came to “see” you? It was her sarees one wore if there was a wedding in the family? It was her wooden lacquered stilettos with velvet embroidered straps one coveted and she let you wear them — albeit after copious amounts of begging! The woman who thought nothing of putting you firmly in your place if she thought you were not doing the right thing or were not right according to her strict parameters of right and wrong.

If you think it was my mother, then you are only partly right for she was my masi — ma jaisi. Sunandi or Nandi masi was also my mother’s best friend and yet thought nothing of riding rough shod over my mother (who was quite a tigress herself) if she was convinced that it was the right thing to do. She was strict with us but equally strict with herself too. There was no ambiguity in her parameters of right and wrong. And neither did she mince words. Once she was giving a piece of her mind to a cousin as we looked on in horror at the vitriol she spewed. She retorted: “Sher ke muuh mein haath diya hai, kaatne toh do!” Of course it became a filial quotable quote!

But within all this she was also a friend. As a friend she cut across age with not only her larger family and people from her own generation, but her nieces and nephews including those by marriage. She took immense pride in our achievements as if they were own. She had an elephantine memory till the end and had everyone’s birthdays and other dates of family events on her fingertips.

I write about her today for she died in a tragic road accident in Bhutan this week and I want to pay tribute to the one of most important influences of my life apart from my parents who together inculcated a taste for a lot of fine things like classical music, dance, painting and handlooms. They pointed me in that direction and what I did with it was obviously up to me.

Unlike my mother, Nandi masi was an inveterate traveller who was bitten by wanderlust and loved to go to the most unusual, remote even, places. I would sometimes get concerned about security and almost exasperated with her fierce independence. But she was unstoppable — travelling with one or the other of her similarly aged friends — she was nearly 80 when she completed the darshan of the last jyotirling last year. The chaar dhaams she had done years ago. The most difficult to access the more it enticed she became to see go there. She had travelled to the United States and Europe years ago and was through with that part of the world.

Fashionable, dressed in tasteful sarees, even in the initial years when money was scarce, Nandi masi continued to be always well dressed till the last whether at home or outside. Unlike my mother who wore whatever we bought for her, Nandi masi would go shopping to the state emporias herself to buy her sarees till the end. I never thought of her as old for she was always updated with the latest news and since she had varied interests — from classical Indian music, dance, theatre to cricket to handlooms and crafts, she kept abreast of the major events.  Her large Garfunkel played Hari Prasad Chaurasia and Pannalal Bose when few had heard them or for that matter, of them.

My mother’s family was truly modern in every sense of the term. These three sisters married out of the community with complete filial support — my mother married a Punjabi, her elder sister a Pahari. The youngest, Sunandi married a Sikh, Manmohan Singh Bawa, a highly decorated Punjabi writer and artist and also artist Manjit Bawa’s elder brother, way back in the 60s when out of caste marriages were unheard of, let alone inter religion ones. Inspiring and supporting in so many ways, she provided the right atmosphere for the arts, education and writing to flourish in the beautifully kept joint family home.

The sisters’ husbands along with my Mamas — maternal uncles — were all friends before they decided to get married and that friendship remained despite or rather inspite of marriage! Nearly four decades ago when Sapru House dominated the culture scene as a venue in Delhi, they would walk from Pusa Road to hear classical music and see classical dance. All of them had great memories of having heard the doyens of the arts perform there.

In the early years of their life my Nana died leaving practically no money, an ailing wife and nine children out of which only four were married. The last two sons and three daughters were still unmarried and studying. The last of these five children became one army pitted against the world. They bonded together so strongly that these bonds lasted them their lifetime and even years of the two brothers moving to the United States and not being able to see each other for decades dimmed nothing. Four other married siblings had their own families to take care and were unable to chip in as much they might have wanted to.

This band of five looked after their mother, took up jobs and studied simultaneously with great grit and determination. Both my mother and Nandi masi took up teaching and did their training together sharing their couple of sarees and other meagre resources and chipped in helping each other with assignments and housework. She even took up a job as a teacher after the training but quit to bring up her two daughters. But education held a very important place in her heart.

My mother and her two sisters had seven daughters and no son between the three of them and they brought us up to be “better than any man” and were feminists in the true sense of the word — even before the word existed — inculcated a sense of independence in us as well. From cooking to changing tyres to putting a fuse to riding a horse — we can do it all without any masculine help — just the way they wanted us to.

Dr Alka Raghuvanshi is an art writer, curator and artist and can be contacted on alkaraghuvanshi@is yahoo.com