A sound lesson in history

Ranged against the strikers was the might of the British armed forces, threatening to destroy the navy. 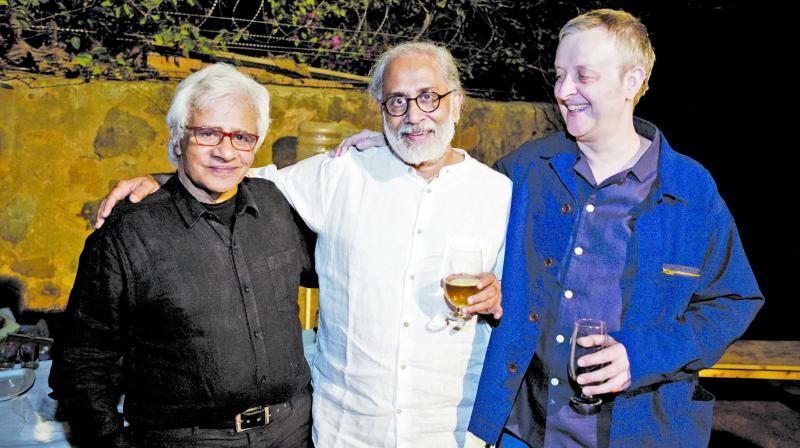 A collaboration between artist Vivan Sundaram and cultural theorist Ashish Rajadhyaksha, Entitled Meanings of Failed Action: Insurrection 1946, based on the unresolved history of Royal Indian Navy Mutiny of 1946, is a space to cultivate dialogues.

A forty-feet container built with steel, aluminium and technology stand at the centre of Coomaraswamy Hall, CSVMS. Conceptualised by Vivan, the structure works as an intimate theatre, where an 8 channel sound (by David Chapman) and sight performance would take one right to the shores of Colaba on HMIS Talwar, the epicentre of the Naval Mutiny in February 18, 1946.

Within a day of the fateful event — which would also remind several cineastes of Battleship Potemkin — a total of 10,000 naval seamen posted across the Indian Ocean took charge of 66 ships and on-shore naval establishments. On the fourth day of the strike, Bombay’s industrial labour force joined the struggle in a show of solidarity, and the city closed down.

Ranged against the strikers was the might of the British armed forces, threatening to destroy the navy. The Indian national leadership, then at the threshold of independence, refused to support the uprising. The curfew that followed ended with over two hundred people being killed on the streets and the surrender of the sailors on the dawn of February 23.

“The genesis of the project began while I was working on a bigger history project in Victoria Memorial,” says Vivan. The artist is talking about one of his most memorable site-specific installation in the Durbar Hall of Victoria Memorial, Kolkata in 1998.

“The idea,” Ashish further elaborates, “is to find new way to converge ideas and conversations.” Whether it was a mutiny or an uprising has been a contested debate. Most of the Indian nationalist leaders didn’t encourage the movement, which is often considered a ‘failure.’ The project, which is a fresh look at the episode, is an artistic development of Subaltern Studies on the historiography of India.

According to Ashish, based on archival material, sourced in India and the UK, the project is a “refabrication as a memory that flashes up at a moment of danger.”

“We are discovering it here at the same time as you are. There is a sense of almost spontaneity here,” says Ashish about reception. Valentina Vitali, professor of Film Studies at University of East London, who collaborated with Ashish to source historical documents was quite interested in the idea of cinema beyond the formal mainstream apparatus. “Unlike in a dark room, here people were conscious of each other and the beams of light moved around the room. The audience preferred to look down instead of making eye contacts,” she pointed out.

But like any intriguing art, this monumental piece, which Vivan says they will dismantle after the exhibition, is almost like the ancient cave, which thinkers from various disciplines could enter and leave with what they would like to know best.