Pedalling from Bengaluru to Kashmir to Kanyakumari, on his cycle, Anil Prabhakar experienced the most memorable of journeys ever. 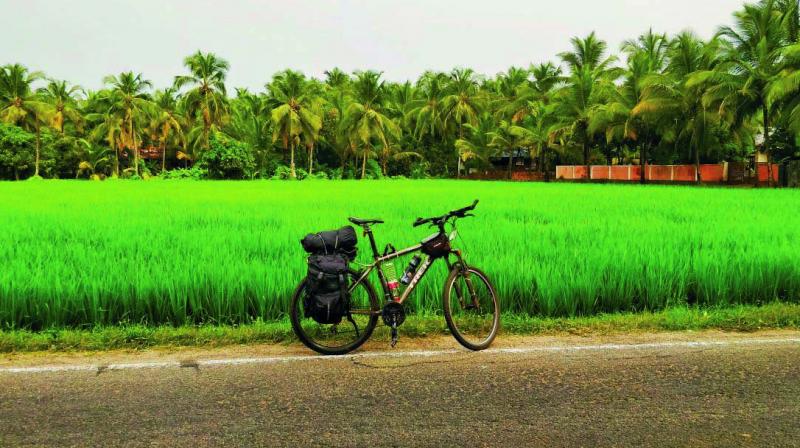 Anil Prabhakar’s cycle next to a lush green field

He travelled about 10,000 kilometres, covered 18 states, all on his bicycle. The man of the hour, Anil Prabhakar, a Bengaluru-based mechanical engineer, quit his full-time job to cycle from Bengaluru to Kashmir to Kanyakumari, and then back to Bengaluru, in what was a tough cycle trail across the country.

He started his trip last year in July and finished his pedalling sojourn in January 2018. Completely disillusioned with his job, the rat race and his drab daily routine was what made Anil quit and embark on this journey. “Work, home, friends and partying, it felt like my life was being wasted, and heading nowhere. I thought to myself, that when I get older, I don’t want to talk about the presentations I made at office or about the days I slogged at office doing over time. Instead, I wanted something a little more special to be remembered by,” says Anil. 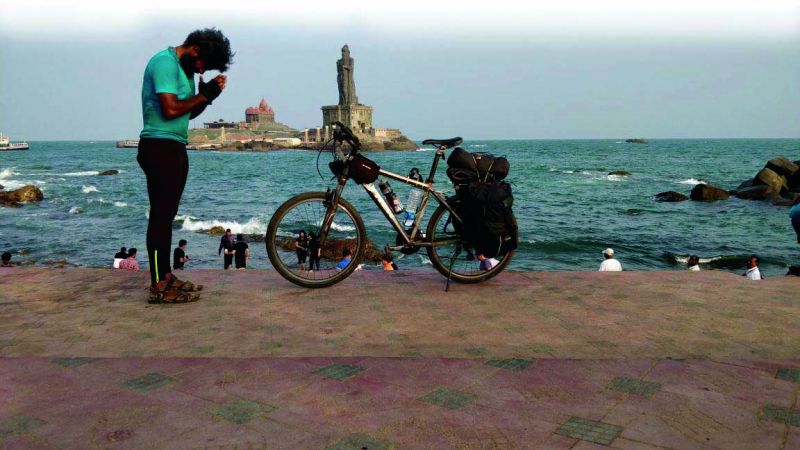 Anil pays respect to the Thiruvalluvar Statue at Kanyakumari

In his six-month-long cycling journey, Anil was bombarded with so many memorable experiences — The freedom to travel, and see hidden nooks and crannies in India. The days were long, the terrain harsh, but he survived with two pairs of clothing, and shared the most wonderful experiences of his life on this tough journey.

Wanting a trip that is challenging, Anil decided to cycle, and do the unthinkable — embark on a 10,000 km trip. The avid cyclist was ready, and raring to go. “Travelling by car, one tends to see the country at a higher level, but to see the country, one needs to experience it at a ground level which was possible on a cycle tour. That has been my belief, and rightly so,” Anil says. 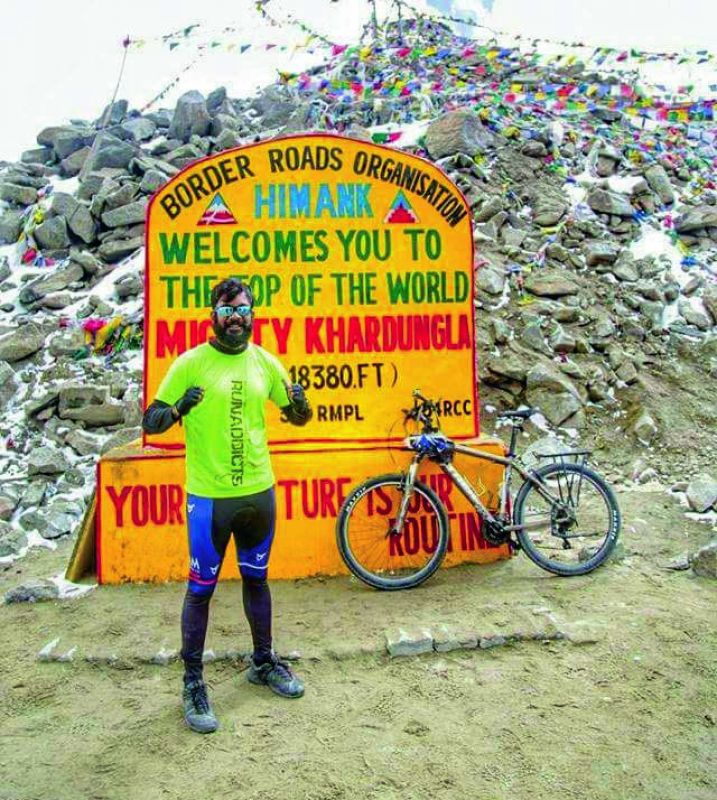 Having travelled through Hyderabad,  Nagpur,  Bhopal,  Gwalior, Agra, Delhi,  Chandigarh, Manali, Leh, Kargil, Sringar, Jammu, Amritsar, Ludhiana, Delhi, Jaipur, Udaipur, Ahmedabad, Vadodara, Surat, Mumbai, Goa, Karwar, Shimoga, Agumbe, Mangalore, Kannur, Kochi, Trivandrum, Kanyakumari and then back to Bengaluru, it’s of course hard to speak about the best memory. For this solo cyclist, it was the stretch from Manali to Leh that was the toughest, and most scenic. He recalls, “That 500 km took me about eight days. Every bend had a different story, different landscape. The beauty of this stretch and its tough terrain pushes you further and further. I experienced snowfall at some of the passes. Riding through snowfall was mesmerising. It was a very emotional moment when we reached the Highest Motorable Road, Khardungla at an altitude of 18,380 feet. This stretch is like a dream route for any cyclist.”

But the terrain came with its own challenges as riding in chilling temperatures approaching Leh was extremely difficult, “The Himalayan weather is so unpredictable with temperatures dropping abruptly in a short span of time. At night, temperatures dropped to single digits to makes matters worse,” says the cyclist. 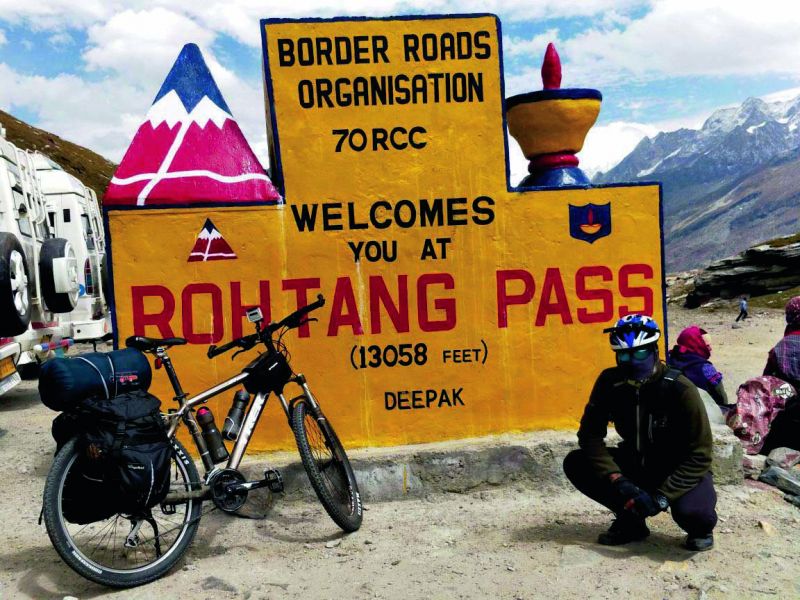 And for sustenance, there was Maggie and omelettes available at the dhabas en route to Leh, he adds, “I still remember, I had stomach upsets and survived on just biscuits for two full days.”

Yet, no trip is complete without meeting new people. Some of the friends he made were passing auto drivers, truck drivers, waiters at hotel, bikers, hitchhikers and other cyclists.

“There was one person I met who I cannot erase from my memory — Verriah, an auto driver from a small town called Nirmal in Telangana. Seeing me cycle on the highway, he said hello and I reciprocated. He later followed me, and requested me to stop riding as he wanted to talk to me. I stopped and started sharing about my ride, and my route further. When I told him the plan, he said nowadays people complain of travelling even 50 km on a motorcycle and you are planning to cover 10,000 km on your cycle! He said, ‘You are great, Sir.’ His eyes were moist and there were tears rolling down. When he got down from his auto, I realised he was an amputee, and one of his legs was missing. My eyes also teared up. He saw a hero in me, and I saw an even greater hero in him. I’m still in touch with him. He’s become my good friend now.”