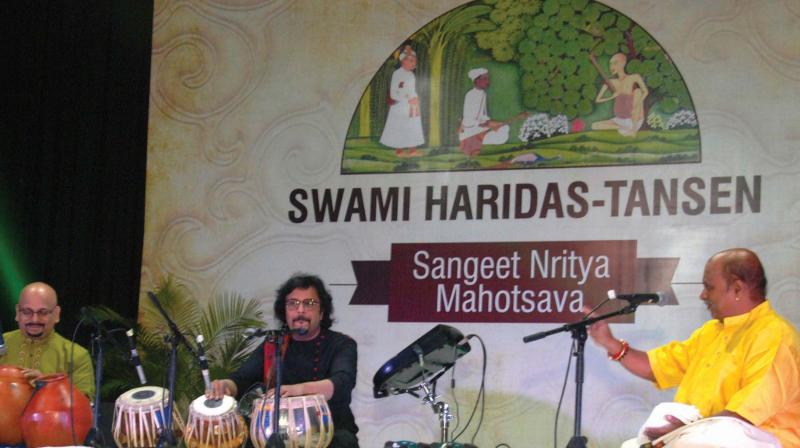 Swami Haridas Tansen Samaroh was a memorial to two of the largest names in North Indian classical music – Vrindavan based Swami Haridas, and his most celebrated disciple Mian Tansen, one of the nine jewels of Emperor Akbar’s court. Brainchild of Kathak queen Padmashri Dr Uma Sharma, this event has over the years, become a much loved and eagerly awaited event in Delhi’s music calendar. The completely accessible seating arrangements make it welcome even to musical novices who are not intimidated by being asked to show invitations at the entry. The large Shankar Lal hall in Delhi’s Modern school was transformed for the four days of the festival into a warm haven, the eating arrangements outside were equally attractive and at affordable prices. Apparently, the sponsors, primarily Shriram Group, HCL and Art Karat are specifically targeting new audiences, a younger generation of listeners.

The artist lineup is fairly conservative. Traditionally, in the world of classical music, there is a perception that if one is a popular artist; somehow the musicianship must be of a lower degree. There is an unvoiced opinion that classical music must necessarily be hard to ingest by a lay public, and “true” classical artists should not also be popular or indeed stars. Slowly, this is changing, and the “star” tag is no longer a consideration for evaluation of musicality.

This year, the new musicians included Bickram Ghosh and his percussion group Drums of India who replaced a last minute drop out by Pt Hari Prasad Chaurasia who wasn’t well. Others were Pt Shiv Kumar Sharma, Vidushi Ashwini Bhide, the Gundecha Brothers and Begum Parveen Sultana. Dr Uma Sharma justified her artist choices “I select artists who represent the best musical lineages and who are carrying forward the music of their forbears.”

Bickram Ghosh’s act was outstanding. Son of Pt Shankar Ghosh of the Farrukhabad gharana, Bickram is an also well known award winning composer, and one of the top percussionists of our time. His ensemble included V Suresh on ghatam, Gopal Barman on the shrokhol, and B Rajshekar on morsing. In his words “taal (rhythm) cannot be relegated only to an accompanying role anymore. I decided on purpose to present a 9 beat cycle, unlike the usually heard 8 or 16 beat. The amazing response of the audience reinforced my idea that with depth of content and passion of presentation one can draw in both the connoisseur and the layman into the magical world of classical rhythm.”

Speaking to several young listeners was illuminating – one young listener, Shweta, was attending a classical music concert for the first time. She had heard Pt Vishwamohan Bhatt was a Grammy nominated disciple of Pt Ravi Shankar and had braved the fog and cold to attend his concert as she was curious to hear a guitarist play classical Indian music. Mahesh from Delhi University wanted artist changes “it would be nice if we heard more young artists like Mahesh Kale and Niladri Kumar. Also why does this festival never include Carnatic musicians? That’s classical Indian music too”. Anna, who is a diplomat opined “there is too much sarod, which I find a very loud, strident instrument. Every year there are at least 3 sarod recitals out of 12 which is too much I feel.”