Leading the path to glory

Bhavana had to endure a lot of physical exertion in the last six months as part of the preparation and daily routine for the Republic Day Parade. 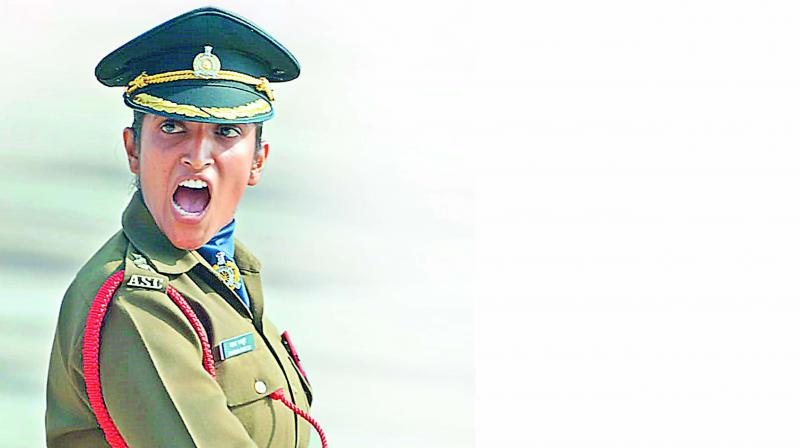 Lt. Commander Bhavana Kasturi, will make history when she leads a contingent of 144 male personnel on republic day parade. She will be the first woman to do so.

On January 26, Republic Day, for the first time in the history of Indian Army, a woman officer, Bhavana Kasturi, will lead the Army Service Corps (ASC) contingent, comprising 144 male personnel. This ASC contingent is participating in the parade after 23 years.

The 26-year-old Lieutenant Commander was delighted when the announcement was made. “It was a moment of pride and glory; my name goes down in the history of the Indian Army. I was so excited — started calling my senior officers and family members to share the news. And of-course, the opportunity also makes me more responsible,” shares Bhavana.

Though she completed her course in  Microbiology (M.Sc.,) getting into Indian Army was always her passion.

“When I was studying in Arora College (Hyderabad), I joined NCC and later participated in the Republic Day parade too. So, from then I was fascinated with the uniform,” reveals Bhavana, who joined the Army service in September 2016 via Services Selection Board.

There was more to her calling. “I was initially posted in Kargil, but I came to Bengaluru only to participate in the ASC contingent selections for the Republic Day parade in July 2018,” she says, adding, “Eventually only four of us were selected. And then the ASC contingent was formed with 144 members and I was asked to lead the group based on my performance.”

Bhavana had to endure a lot of physical exertion in the last six months as part of the preparation and daily routine for the Republic Day Parade. “Practicing running; sit ups, push ups, chin ups, rope climbing, etc., (along with 144 jawans) were done religiously so that our bodies shape up well,” she says, adding, “We also practice drill for the parade and our moments are monitored and corrected whenever necessary by the instructors. It’s imperative that our timing should be in sync with the team, and the instructors worked hard to help us get the rhythm.”

Being a male contingent, one of the biggest challenges Bhavana faced was to keep them motivated. The strenuous physical training, matching the exact routine of the male cadets, toughened her. “As an officer, it is my duty to keep their mindset positive. We ate together, hung out and eventually developed a bond which I will always cherish in life.  Army is all about officer-men relationship.”

Bhavana says that life in the Army made her become more clear-cut. “Earlier, I was very indecisive, but now it’s changed after I got into the Army. My responsibilities and charter of duties transformed me into a different and a more confident person,” says Bhavana, who was trained in the Officers Training Academy, Chennai, for 11 months. She further says that the Army is a place where one has to constantly perform. It’s tough because of the ‘call of duty’ for selfless service.

Bhavana believes that every woman has immense potential and it is just a matter of determination and consistency to make it big. She proudly says she never faced any gender discrimination. “I guess there’s huge misconception; once you become an officer the amount of work is the same for male and female officers,” she said. Born and raised in Hyderabad, Bhavana credits her school, St George’s Grammar School, for imparting good education. “My teachers taught me how our mindset should be and they nurture broad-based thinking. Along with the knowledge, my teachers passed on their wisdom. I also draw fortitude from my parents,” she recalls.