Correcting history or rewriting it?

Does the renaming of towns and cities by the State or Central government make sense? 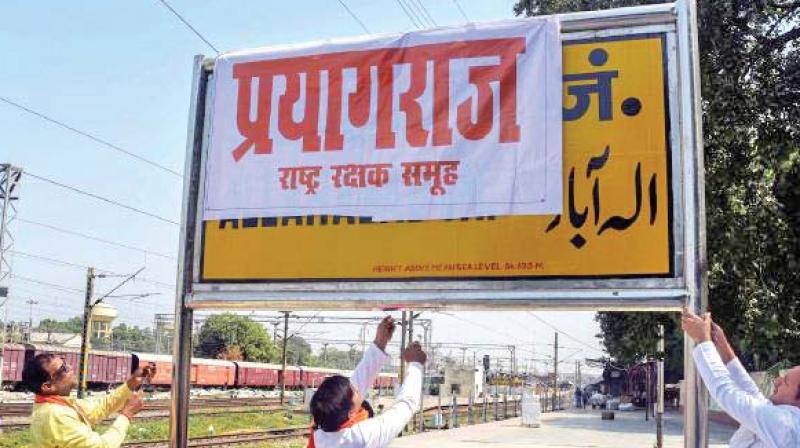 Protesters cover a nameplate of Allahabad with Prayagraj. — File

Places getting renamed is not a new practice in India. We have gotten used to calling Madras ‘Chennai’, Calcutta ‘Kolkata’, Bangalore ‘Bengaluru’, and Bombay, ‘Mumbai’. However, the recent renaming of Faizabad and Allahabad as Ayodhya and Prayagraj, respectively, by the Uttar Pradesh government has created quite a talk and so many trolls were made on the same. The trend of changing the names of key UP districts, towns and railway stations has drawn criticism not just from the opposition, but from the ruling NDA constituent Suheldev Bhartiya Samaj Party, too. The government had even renamed the Mughalsarai Railway Station, another historic spot, as Deen Dayal Upadhyaya Junction earlier.

Over the past one year, the Central government has given consent to the renaming of at least 25 towns and villages in the country. Soon after the UP government decided to rename Faizabad and Allahabad, there was an outbreak of similar demands, the latest coming from Netaji’s family demanding to rename Andaman & Nicobar as ‘Shaheed and Swaraj Islands’ as a tribute to Netaji Subash Chandra Bose.

Does the renaming of towns and cities by the State or Central government make sense? Though the government claims that they are doing it to ‘correct historical distortions’, can that be justified?

Considering the fact that names of many places have religious importance too, will that hurt the sentiments of religious groups? Or will that result in dividing the people? What if a new government comes and renames the cities again? Isn’t that a possibility, too?

Clear bias visible
Shaarika Menon, social activist
The city that has one of the oldest universities in India, resonating and reflecting with its own name, is now Prayagraj!! It will take a while before I get my geographical name book in order given the crazy spree at which changes seem to happen. Is it discomforting?? Of course it is, and not just personally. It remains a daunting task on the government to make changes on everything from bill boards to stationery and there goes a lot of the tax payers’ money. Now, why are some names acceptable while over 100 names of cities and states have already been changed? Maybe a peek into recent history is necessary.

The memory of the colonial rule sat uncomfortably on the psyche of the Indians. In order to break away from the remnants of colonial patronage and to form their own identity, the need to change the names of cities and states was as important. Hence the names went back to their origin. But the current renaming ceremonies seem slightly skewed because the motive seems like a blatant giveaway of a political group’s long standing agenda. The choice of cities and towns that are renamed is notably of non-Hindu or to put it more distinctly, Mughal or Muslim names. According to the Constitution, renaming of cities is a task left to the state legislature, to be done based on the sentiments of the majority but without hurting the ethnicity or beliefs of the minority.

It will cause disharmony
Bandana Sondhi, social thinker
There is much to be accomplished and achieved in a country as vast and diverse as ours, where so many different types of people, cultures and religions co-exist. There are many issues that the country is facing, like poverty, terrorism, unemployment, safeguarding women and their rights, and the list is endless. Renaming cities and states is a waste of good time and effort, and proves divisive and creates an issue among people of different castes. It may hurt certain religious sentiments and cause disharmony in a country as vast as ours. It leads to confusion among our people and is a bad example to set in front of other countries. Why waste time on all this when there is so much else to be done here? Every government, Central or local, must only consider actions which unify our people and country.

Bestowing earlier name
Ishta Saxena, Advocate
In India, each and every city or state has its own story of the evolution. It seems childish to say that altering the name of cities is purely religious or political. One must understand the concept and facts hidden behind the change of the most trending cities i.e; Allahabad and Faizabad (now known as Prayagraj and Ayodhya). So, according to me, changing the name of cities is neither a religious motive nor political, it’s only about bestowing the cities back with their historical name. Moreover, talking about renaming Andaman & Nicobar as ‘Shaheed and Swaraj Islands’ as a tribute to Netaji Subash Chandra Bose, there is nothing wrong in this. It is quite right as a few more freedom fighters such as Bhagat Singh, Sukhdev and Raj Guru were hanged in Cellular jail of Andaman & Nicobar Islands. It’s about giving honour and tribute to them. Moreover, we are living in a democratic country. The government may change, and may again alter the name because the Constitution of India empowers the state for the formation of new cities, alteration of areas, boundaries or names of existing cities.

Manipulating past
Shahal B, PhD Scholar
Basically this is a battle for/on history. The question is who has a legitimated claim over the history. All oppression and power excision in the world have been backed up by such erasure or manipulation of history. This is not something different. What is happening should be seen along with the ongoing pogrom against Muslims as a process of erasing every mark of their existence. This is to create a pure Hindu India, unpolluted by pollutable presences.

Intention is important
Sudha Ramalingam, activist
Understanding the context in which cities/towns are renamed and the intention behind such decisions is important. If it is done for the sake of vote bank politics or to appease a particular section of people in an attempt to put down another section of people, especially as part of a communalist agenda, it should be opposed.

Ignore it, move on
Sandeep Aikyam, activist
This is the reality pill we have to digest for having chosen democracy — the voice of the majority. What is important is whether these decisions have the support of the majority in politics. If we suppress them, then it will lead to the rise of a new kind of politics.  Just like the Ram Janmabhoomi issue gave the unknown BJP a majority in the House. While the Congress, which kept ignoring the majority sentiment and playing minority politics, has almost become irrelevant. Actually, places have been renamed for various reasons; I guess once renamed, they will be forgotten. Earlier, we were renaming them because the names were British, now we are renaming them, because the names are not the historic names. We should ideally just ignore the issue and move on. A city by any other name is just a city. We don’t need to make much ado about it.