Many girls are subjected to such misogynistic outlooks once their parents start looking for a groom for them. 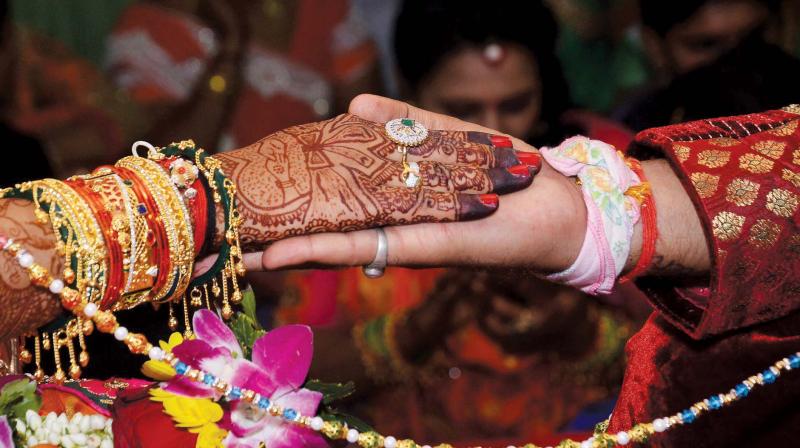 Matrimonial expectations from girls in India range from regressive to outright bizarre, and reveal that patriarchy and misogyny still prevail in the country.

A recent matrimonial advertisement in a leading daily has a 37-year-old industrialist seeking a bride, and his specific demands are that “she should be a non-smoker, non-feminist, good cook, never have been married before or have a child, and be under the age of 26 years”. The ad has left many fuming at the regressive mentality that still exists within  our society.

However, amidst all the outrage, one wonders what’s new? No matter how the guy looks or what he does for living— most matrimonial ad has a requirement of a slim, fair and homely girl who also earns as much as the man.

Says psychologist Dr Purnima A. Nagaraja, “Such advertisements are not surprising. We still live in a typically patriarchal world where it is assumed that the end result for a woman is to get married. Even today, in urban spaces, the concept of a metrosexual man is heavily looked down upon. It is a matter of pride when a man says he cannot even make a cup of coffee, but a woman of the same age is expected to be efficient at cooking, cleaning and most household responsibilities. It’s like ‘compromise’ is a woman’s middle name.” 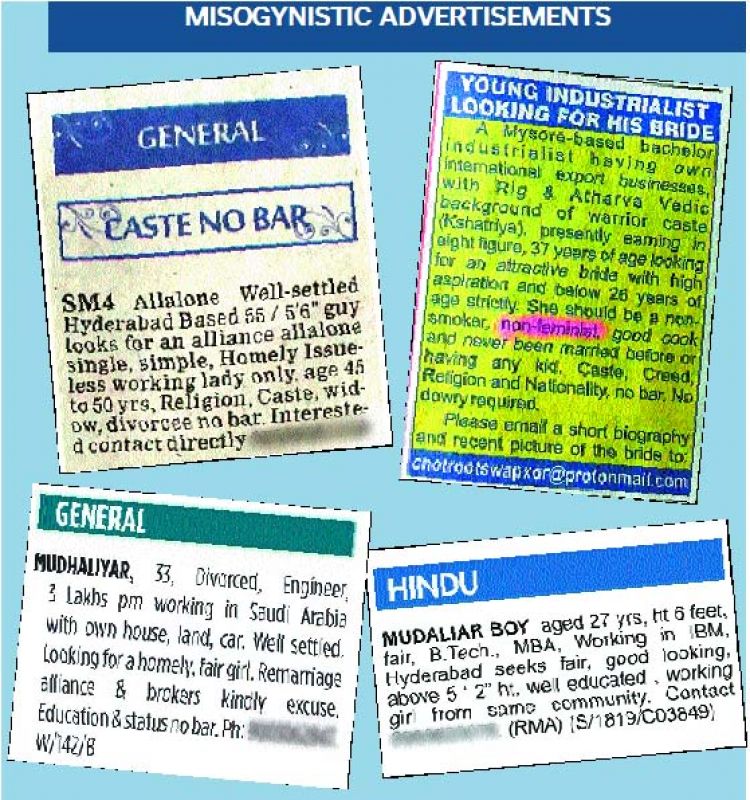 Many girls are subjected to such misogynistic outlooks once their parents start looking for a groom for them. They are judged based on their complexion, height, weight or career ambitions.

“I have a dusky complexion, which apparently is a ‘problem’,” shares a 27-year-old professional on the condition of anonymity. “I have been rejected by at least four families because of my skin colour. Many even think that being a career-oriented and ambitious woman is an issue. They feel I won’t be able to take care of my family and hence say no to the rishta.”

She adds, “A woman once told me, ‘naukri toh theek hai, magar khana theek se paka leti ho?’ It’s like they are looking for a house-maid who can cook, clean the house, take care of their son and also give them a grandchild.”

That’s not all, many families also decide whether or not to marry their sons to a girl based on her family background, or the gender of the girl’s siblings. Take the case of Jahnavi Rao, an IT professional. After meeting and speaking to her, an IIT professor rejected her only because she doesn’t have a brother. Recounting the incident, Jahnavi shares, “The man’s father thought that since my parents have just me and my sister, I would like to take care of them even after marriage. They were so shameless that they even said that if I had a brother they would have no objection to take things forward. It is a shame that such narrow minded people still exist.”

Narrating a similar experience, Nivedita Natraj shares, “When one of the prospective grooms learnt that our parents were no more and my elder sisters would organise everything, they backed out saying, ‘How well can these ladies arrange a marriage? There will be so many expenses and responsibilities to take care of. If they had a brother, then perhaps it would have been better.’ Many others rejected me because of having no parents, living with my relatives and the inability to give dowry.”

Such practices are not just prevalent in the families, even the marriage bureau agents look for ‘fair and slim’ girls for their clients. Explaining the demands of families while looking for marital alliances for their sons, Suresh Chandra, a marriage agent, says, “The way marriages are fixed, differs. First they check the family background and then the education of the girl/boy. If they like these two things, then I give them each others’ contact numbers. In fact, if the girl’s family is rich, then nothing else matters. Else, everyone wants a girl who looks good. You have to understand, money plays a vital role here.”

How long then can such relationships last? Says relationship expert Richa Khetawat, “The entire charm of having a ‘beautiful bride’ vanishes in a couple of months after marriage. Then all that matters is how well the husband and wife understand each other and how deep their bond is. If you don’t understand a person, their lifestyle, their likes and dislikes and only marry them for their looks or money, the marriage is bound to break. In such situations, many couples head for divorce while others simply adjust in a ‘social marriage’.”