Kumari’s first book The Lallgarh Palace — Home of the Maharajas of Bikaner was a piece of cake as accessing the archives was pretty simple. 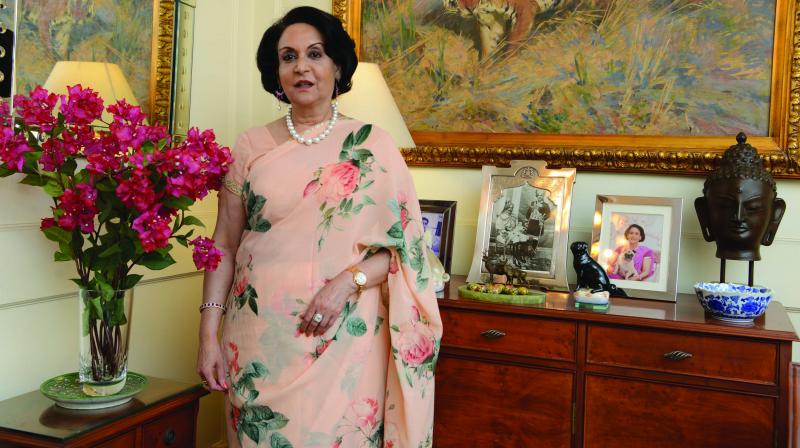 A shooting champ, Arjuna awardee, Intach and Peta member, published author... and she also happens to be a princess who grew up in the palace of Bikaner. Meet the elegant and erudite Rajyashree Kumari.

A former shooter and now an author, Rajyashree Kumari, princess of Bikaner, dons many hats. From being a staunch supporter of preserving heritage properties to being a life member of the Indian National Trust for Art and Cultural Heritage, and an active member of People for the Ethical Treatment of Animals (PETA), she definitely has her hands full.

In 1969, Kumari then seven, won the National Air Rifle Championship followed by the Arjuna Award. Modest as she is, Kumari finds the attention given to her childhood quite unnecessary. However, she adds, “Shooting came very normally to me as our ancestors were all hunters and shooters. My father was really good at shooting and he started teaching me from a very young age and that’s how it all began.”

Just as shooting was something passed on by her ancestors, her love for books was imbibed from reading the tomes on history, tradition and the many books and written accounts pertaining to the period of her grand and great-grandfather that were at home. “But nothing was kept in an organised manner, they were all kept in a dusty store until my father decided to put them in order. At that time I was in college and he would ask me to help him. Thus, started the process of categorising all the different files according to the periods. And there was a huge amount of information for someone who wanted to learn,” she shares.

Kumari’s first book The Lallgarh Palace — Home of the Maharajas of Bikaner was a piece of cake as accessing the archives was pretty simple. “By that time the archive was nicely organised and information was mostly available within the palace. I did very little research outside the walls of the palace.”

Talking about her book Palace of Clouds that was recently unveiled by Maharaja Gai Singh of Jodhpur, the 59-year-old says, “It is a logical progression from my previous two books — the first one was about the palace and the families of the five generations who lived there, the second was about the Maharajas of Bikaner — the content was all there, it just needed to be tied up with me, becoming a contemporary representative of theirs. I would say the book is semi-autobiographical taking information from previous two books and linking up with this one,” she adds.

Kumari feels a strong sense of duty to her ancestry. “I try and keep the history alive through looking into various heritage properties and various trusts that my father has created. And also through these books. In my own way, it is a way of paying tribute to my ancestors.”

After three books, is she planning to pen a fourth? “Right now I’m completely exhausted. I won’t be able to write a letter if you ask me,” she laughs, adding, “But I suppose, when the first book is out of print then maybe I will revive it. And instead of making it just about the palace, I might work on palaces and forts of Bikaner and make it into a coffee table book.”