‘Hinduism has capacity to re-invent itself’

Gulzar who has had a long association with Pavan, praised the writer for understanding the social change and explaining it through his writings. 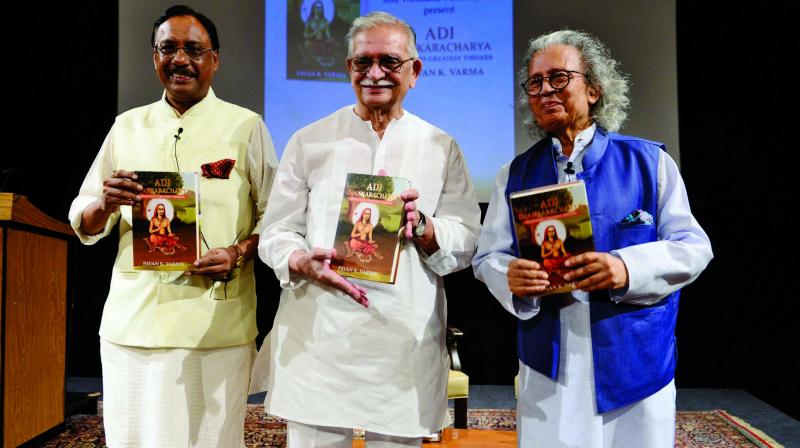 Of the many hats, Janta Dal (U) spokesperson Pavan K Varma adorns, one is that of a prolific writer. In his 22nd book, Adi Shankaracharya: Hinduism’s Greatest Thinker, unveiled by veteran lyricist Gulzar on Tuesday at NCPA, the author has gone an extra mile by connecting Hindu philosophy with science.

Pavan, who travelled across the length and breadth of the country to strengthen his knowledge on the great saint, feels Adi Shankaracharya is a template to rediscover the depth of thought. “Adi Shankaracharya’s life fascinated me. He was born in Kerala and took samadhi in Kedarnath. In a short span of 32 years, he set up mutts across the country such as Sringeri Sharada Peetham in the south, Dwaraka pitha in Gujarat, Govardhana Matha in Puri and Jyotir Matha in Uttrakhand. Above all, he revived Hinduism and by the sheer cerebral energy of his thoughts, took Hinduism back to its philosophical roots,” said the author.

Gulzar who has had a long association with Pavan, praised the writer for understanding the social change and explaining it through his writings. “He has contributed in preserving and explaining the Indian culture and the ways to take care of it. He has a knack for not only showcasing but also preserving Indian culture,” said Gulzar.

The author whose book includes chapters that draws parallel between cosmos and universe and the Hindu philosophy, emphasised that at a time, when people are facing self-appointed evangelists such a thought process is the need of the hour. “It is important for them to explain the profundity of the thought. And one of the ways of doing that is through the greatest minds like Shankaracharya’s,” he said.

Further dwelling on how Hinduism has been a dynamic practice of faith, the ex-diplomat is of the opinion that the greatest harm one can do the religion is simplify it. “It is a way of life. Even though it has failed many times, its grand success lies in the fact that it never dies. It has the capacity to re-invent itself.”

When asked about an unknown facet of the saint, he reveals that the correlation between the latest discoveries of science in areas such as cosmology, quantum physics, and neurology increasingly shows what Shankaracharya had predicted. “What was seen through the philosopher’s eye is now being validated by microscope and telescopes today.” While Pavan may call this book as one of the most difficult works of his, it opened a voyage of discovery for him.