Whether they’re infused with CBD or a "hard" take on kombucha, healthy-ish options are taking over ice chests this summer. 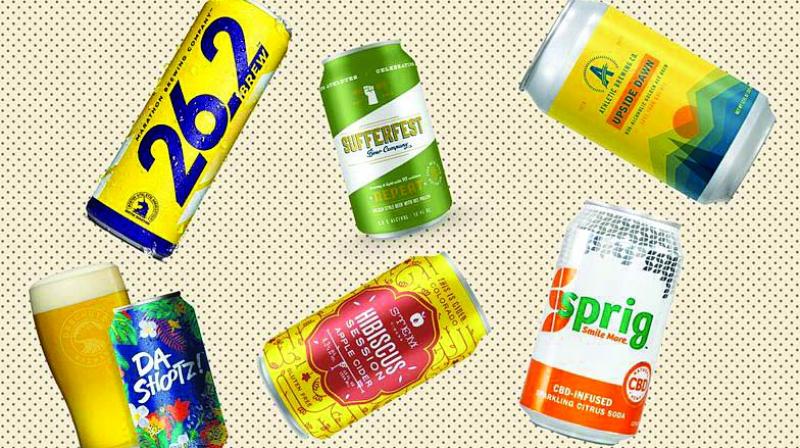 That line of thinking corresponds with consumers’ increasing demand for healthy-or at least not dramatically unhealthy- drinks that are family-time friendly.

What to drink at the beach? It’s a challenging question, one that goes back way before the introduction of the beach blazer.

Canned beverages have long ruled the cooler. It’s partly out of convenience: They’re not as heavy as bottles, and you don’t need to remember to bring a corkscrew or bottle opener. But it’s probably going to be hot, so you don’t want something so strong that you get blitzed by 3 p.m.

That line of thinking corresponds with consumers’ increasing demand for healthy-or at least not dramatically unhealthy- drinks that are family-time friendly. The no and low-alcohol beer market is keenly aware of this. Anheuser-Busch InBev NV predicts these kinds of brews will represent 20 per cent of its production by 2025.

Bill Shufelt, co-founder of Athletic Brewing Co. in Connecticut, left Point72 Asset Management to make nonalcoholic beer because he saw an opportunity for a modern beverage that lends itself to people’s professional careers and social lives. “You can take our cans anywhere, including places where alcohol isn't allowed,” he says.

And if nonalcoholic beverages are big, CBD (or cannabidiol) drinks are even bigger. A study by Zion Market Research forecast that the global cannabis beverage market will reach $4.46 billion by 2025.

We’ve selected a dozen standout new cans to fill up your next 12-pack. They're convenient to carry, and, for the environmentally conscious, they have a lower carbon footprint than glass bottles because they're lighter to ship and are more often made up of recycled material. Ranging from athletically minded brews to spiked seltzers gunning for the La Croix crowd, all are increasingly available to consumers-at least until they sell out. “Two years ago, no one would talk to us,” Shufelt says. Fast forward to a couple of weeks ago: “We did a limited release of 50 cases of gose, and they sold out online in under a minute.”

As the name suggests, 26.2 was created with runners in mind, thanks to brewer and marathoner Shelley Smith, who worked with other athletes to create the blend for Marathon Brewing, a new line from Boston Beer. While it's made to pair with an active lifestyle, Smith says she didn't want to sacrifice too many calories for taste; she accents the brew with coriander and salt for a flavorful, savory hit.

One of the country’s largest independent brewers, the company that put Oregon on beer drinkers’ maps has gotten into the low-alcohol game. In March, Deschutes began selling flower-emblazoned cans of this toasty, light-bodied pilsner.

Founded in 2016 by long-distance runner Caitlin Landesberg, Sufferfest is based around athletes who desire a decent post-workout beer. (The tag line: “Athletes who love beer.”) The company makes a point of adding good-for-you ingredients: This kolsch is brewed with bee pollen, so it's light and floral.

Like other brewers, Dogfish Head, which was just bought by Boston Beer Co., has seen demand grow for low-calorie, low-carb drinks. It’s made with monk fruit, the Asian melon that's a favorite sweetener in the keto diet world. The end product is a hoppy IPA with tropical fruit flavors.

Athletic Brewing, started in 2017, is the only brewery dedicated to nonalcoholic craft beer east of the Mississippi. Its just-released Mexican-style copper ale is summery and citrusy, with light malty accents.

Classically speaking, a shandy is a beer-and-lemonade drink. But the cult coffee roaster La Colombe decided to broaden the definition, substituting cold brew for the classic "brew" to create the first official coffee shandy. The lightly roasted cold brew comes in three refreshing flavors-lemon, grapefruit, and cherry-with a little sugar to round it out.

If you’re not familiar with spiked seltzer, welcome to Earth. The drink is geared toward the La Croix crowd who wants a ready-to-open, lower-alcohol beverage instead of a vodka and soda blend. Bon & Viv got major exposure when it ran an ad introducing the updated product during the 2019 Super Bowl. (The label is owned by Anheuser-Busch.) The drink, made with sparkling water and fruit flavors, now has an ABV of 4.5 per cent, down from 6 per cent, and botanical flavors such as the tart and slightly woodsy black cherry rosemary. Other flavors include cranberry and clementine hibiscus.

It's the newest flavor from the three-year-old Austin-based beverage company Mighty Swell, whose founders are veterans of Sweet Leaf Tea, Deep Eddy Vodka, and Goldman Sachs. Its canned wine coolers, spiked with orange wine, are made without high-fructose corn syrup or food coloring and have a notably bright, juicy fruit flavor.

Some people grab a bottle of kombucha as an alternative to alcohol, but if you add more sugar and ferment it for longer, you can raise the booze level. The Ojai, Calif.-based Flying Embers began distributing its drinks, made from black tea and ingredients like turmeric, in December. The crunchy granola flavors include Ginger & Oak and the darkly fruity Ancient Berry. In keeping with the name, 1 per cent of the company's revenue goes to firefighting charities.

Here’s the secret about hard ciders: Most of them come in at more than 5 per cent alcohol, giving those apples quite a boozy punch. But Stem has made a point of keeping its alcohol levels lower. The Colorado-based cider house, which last year opened a taproom and restaurant outside Denver called Acreage, makes its summery floral selection with fresh apple juice and dried hibiscus flowers.

A major player in the cannabis and CBD-infused beverage market, California’s Sprig became the most widely distributed CBD drink in the U.S. earlier this year. While it has a new “zero sugar” line with just 5 calories per can, the best flavor is the original soda, which has the refreshing taste of grapefruit along with a dose of CBD oil, and cane sugar instead of stevia.

Before 2018, Abracadabra was known around Woodstock, Vt., as a coffee roaster. Then the shop teamed with a neighboring hemp farm (they met at a farmers market) and began producing CBD-infused beverages. Chill Brew combines carefully sourced Ethiopian beans with particularly aromatic hemp extract to round out the fruity flavor of the coffee. Also worth noting are the cans, arrayed with trippy doodles.