‘National Awards fiasco did Smriti in’

While she was being expected at Cannes, an abrupt calling resulted in her ouster from the I&B ministry. 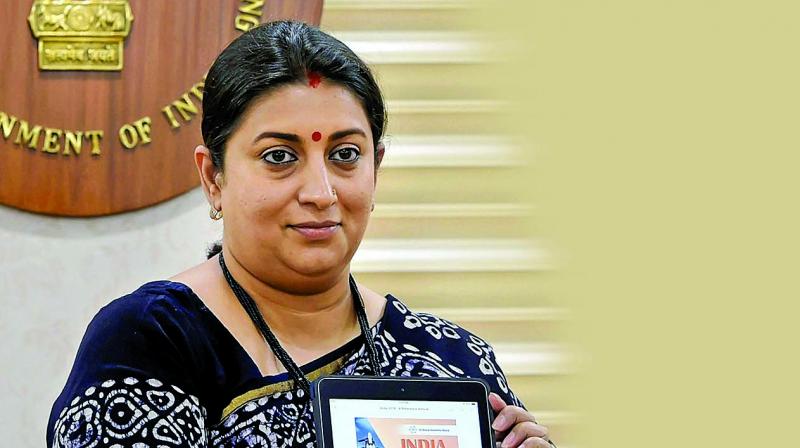 After Smriti Irani was given marching orders from the information and broadcasting (I&B) ministry, shock and disbelief seem to be the trending sentiment in the BJP party ranks.

A senior member says, “This came as a complete bolt from the blue. Some of us left for Cannes. Smritiji was supposed to join us. But she opted out at the last minute since orders came from the PM’s office that she was needed in Karnataka. Now, we return from Cannes and she is no more the I&B minister! What happened? Whom do we submit our lengthy reports to? The initiatives at Cannes to promote regional Indian cinema in a way were all Smritiji’s.”

Party members say Smriti was shunted from the I&B ministry because she was taking unpopular decisions. But the key reason seems to be the infamous National Awards function blunder.

“Too many bureaucrats were being transferred. Apparently, salaries were being blocked. But it was the National Film Awards fiasco that did her career in. The fact that a majority of awardees chose to boycott the National Awards function after the President refused to hand over the awards personally to every winner, really went against her. The incident gave the government a bad image insofar as cultural activities is concerned. If the President of India had communicated his inability to attend the entire function to Smriti, she, in turn, should’ve communicated the same to the awardees.”

However, a colleague and friend of Smriti stoutly defends her against charges of negligent communication. “Till late on the night before the National Film Award ceremony, Smriti was in talks with the President’s Office hoping to make the President change his mind. As for taking unpopular decisions, she was only trying to improve the running of the various government-owned cultural organisations. She had no hidden agenda. The friend also says that Smriti’s dismissal spells doom to women in politics. “Her ouster is a blow to all of us and to the belief that women in politics are now poised to be given an equal position to men. The minute a woman tries to assert herself she is seen as a threat,” says the friend.