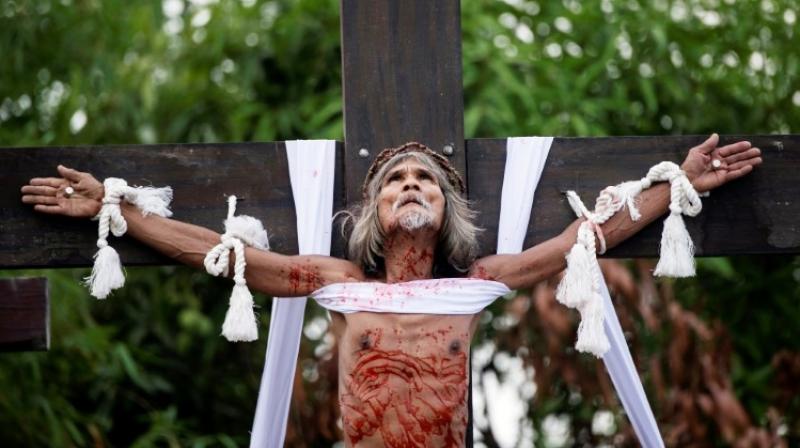 Eight centimetre (three-inch) spikes are driven through both the man's hands and feet before the wooden cross is raised briefly for the crowds to see. (Photo: AFP)

Philippines: Hundreds of barefoot men beat themselves with flails and at least 10 were to be nailed onto crosses throughout Good Friday in a blood-soaked display of religious fervour in the Philippines.

Frowned upon by the Church, the ritual crucifixions and self-flagellation are extreme affirmations of faith performed every Easter in Asia's Catholic outpost.

Barefoot men wearing crowns of twigs walked silently on the side of a village road in the scorching tropical heat of the northern Philippines, flogging their backs with bamboo strips tied to a length of rope.

While many of the 80 million Filipino Catholics spend Good Friday at church or with family, others go to these extreme lengths to atone for sins or seek divine intervention in a spectacle that has become a major tourist attraction.

"This is a religious vow. I will do this every year for as long as I am able," 38-year-old truck driver Resty David, who has been self-flagellating for half his life at his village in the northern Philippines, told AFP.

He said he also hoped it would convince God to cure his cancer-stricken brother. Blood and sweat soaked through the penitents' pants with some spectators grimacing with each strike of the lash. Some hid behind their companions to avoid the splatter of gore and ripped flesh.

Many in the crowds had driven for hours to witness the frenzied climax of the day's gory spectacle, when believers allow themselves to be nailed to crosses in a re-enactment the crucifixion of Jesus Christ. "I'm a little bit overwhelmed. It's very intense, I haven't expected something like this," German tourist Annika Ehlers, 24, told AFP.

Ehlers said she had witnessed the first of 10 scheduled crucifixions during the day in villages around the city of San Fernando, about 70 kilometres (40) miles) north of Manila.

Eight centimetre (three-inch) spikes are driven through both the man's hands and feet before the wooden cross is raised briefly for the crowds to see. After that the nails are pulled out and he is given medical treatment. The Church says the faithful should spend Lent in quiet prayer and reflection.

"The crucifixion and death of Jesus are more than enough to redeem humanity from the effects of sins. They are once in a lifetime events that need not be repeated," Catholic Bishops' Conference of the Philippines official Father Jerome Secillano said.

"Holy Week.... is not the time to showcase man's propensity for entertainment and Pharisaical tendencies," he added. Nearly 80 percent of people in the Philippines are Catholic, a legacy of the nation's 300 years of Spanish colonial rule that ended at the turn of the 20th century.