The fly's bubble-blowing has been observed before, but its function has remained a mystery up until now. 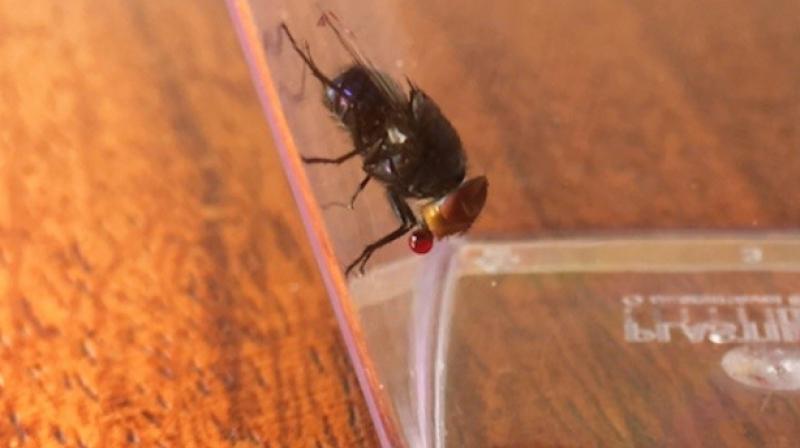 While sweating and panting is an effective cooling method for mammals and birds, body surface evaporation is tougher for insects. (Photo: AFP)

But for ingenuity, the Latrine blowfly may very well take the cake.

To cool down, it blows bubbles with its stomach juices through its mouth, and then sucks them back in, scientists revealed on Thursday.

"As the fluid moves out, evaporation occurs which lowers the fluid temperature, the fly then moves the cooled droplet in, which cools off the body temperature of the fly," explained Denis Andrade of the Sao Paulo State University in Brazil, who co-authored a study in the journal Nature Scientific Reports.

This "bubbling behaviour", he told AFP, appears to be "a very effective way for blowflies to promote evaporative cooling and, therefore, lower their body temperature."

The Latrine blowfly is a warm-weather insect best known for depositing its eggs on dead animals.

The fly's bubble-blowing has been observed before, but its function has remained a mystery up until now.

Andrade and a team used infrared heat imaging cameras to look for any temperature changes on the fly's body during "bubbling behaviour".

And they observed that the reddish coloured bubble -- growing to almost double its head size -- cooled rapidly, "down to as much as eight degrees Celsius (14.4 degrees Fahrenheit) below ambient temperature, within about 15 seconds," the researchers wrote.

"Blowflies then re-ingest the cooled droplet, which lowers the temperature of the fly's head, thorax and abdomen by 1.0 C, 0.5 C, and 0.2 C respectively" -- and more after repeated efforts.

The flies blew more bubbles as air temperature increased, but fewer in humid surroundings where moisture in the air hampers evaporation, the team observed.

Put together, the observations serve as "compelling evidence" that bubble-blowing is used, at least partly, to regulate body temperature, said Andrade.

Other functions may include digestion.

While sweating and panting is an effective cooling method for mammals and birds, body surface evaporation is tougher for insects with their hard, wax-covered external skeletons.

Other insects may use the same method as the latrine fly, suggested the team, but only those that can blow a big enough bubble relative to their body size.