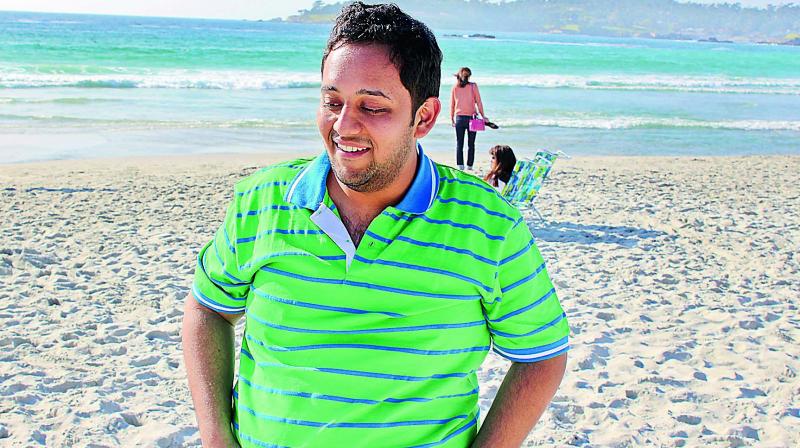 Born with an incurable vision impairment, Hyderabad’s Venkatesh Potluri has had a brilliant academic career. “Throughout my childhood, I tried to devise ways to use regular objects as assistive materials. I understood geometry by touching figures, constructed by sticking matchsticks and thread on paper. Later, I operated computers with the help of screen readers, a software that converts text-to-speech,” he reveals.

Even though Venkatesh passed his Intermediate with 85 per cent, he was barred from taking the All India Engineering Entrance Examination (AIEEE), and was denied admission at most premiere engineering colleges owing to his disability.

He shares, “I felt let down by the colleges who refused to see past my disability. Like any other aspiring student, I was disappointed that I was denied of an opportunity to study not because I was academically incapable, but due to my disability. I realised however, that I had to look at the bigger picture and changed my focus from reacting emotionally to responding through actions. My parents strongly believe in doing whatever it takes and staying positive for me to succeed against all odds. So I carried forward that mindset.”

After struggling for six months, Venkatesh eventually got admission into IIIT-Hyderabad — a proud and emotional moment for him and his family.

“The institution accepted me based on my academic strengths. This restored my belief in the fact that academic institutions give opportunities to capable individuals,” says Venkatesh, adding, “My friends and family motivated me to be who I am today, they believed in my ability.”

Venkatesh recalls facing several challenges, including finding accessible mathematical content to study. The complex equations and other such technical study material were not easy to grasp due to their visual representation.

“Studying a math-intensive course independently was a challenge at that time due to technology constraints. People with visual impairment find it tough to access mathematical content independently. That’s why I pursued my research during my Masters in Computer Science, focusing on accessibility and assistive technology,” says the youngster, who believes that for any technology to be truly empowering, accessibility should be inbuilt, thus encouraging inclusivity.

“We’ve developed techniques to render mathematical content in audio in such a way that listeners with visual impairment can understand and answer math questions with 95 per cent accuracy,” he explains.

Significantly, this work was presented at the 30th Technology in Persons with Disabilities Conference in San Diego, and was also published at the 11th International Conference on Natural Language Processing in Goa.

The 25-year-old, who is currently a Research Fellow at Microsoft Research Lab India, Bengaluru concludes, “I will continue working on accessibility and assistive technology because it’s a great opportunity to improve technology for people with disabilities.”