As vinyl enthusiasts across the city prepare to celebrate World Record Store Day this weekend. 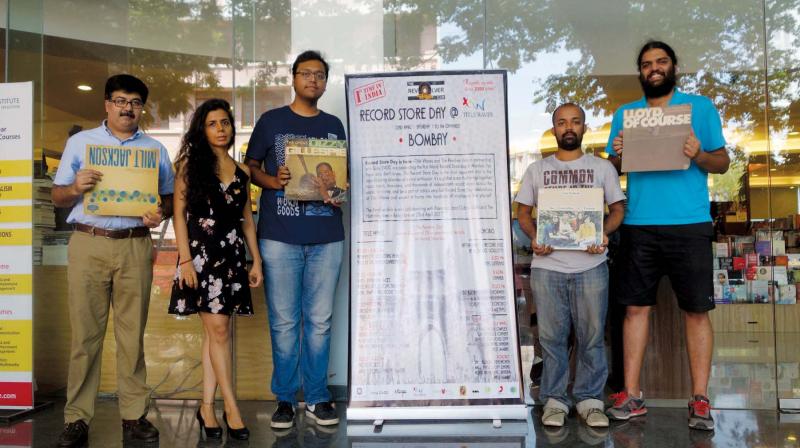 The Revolver Club team who are organising the event

Record connoisseurs are of the common belief that the quality of sound that a vinyl record produced when played is unparalleled by any other. However, with the advent of the digital age, the practice of sitting in one’s living room with smooth tunes crooning out of a turntable as a jet-black record spins, held in place by a needle, has become a rarity. Indeed, it was the early 90s, which saw record production screech to a halt in India. However, 2009 saw a revival of the vinyl records of yesteryears as companies like Sony and Universal started production of records once again, with iconic shops like Rhythm House selling the product. Cut to 2017 and Mumbai is all geared up to celebrate its first Record Store Day — an event celebrated by vinyl-lovers worldwide on the third Saturday of April. This year, April 22 is the lucky date for the event.

Says Manu Trivedi, one of the co-owners of the Revolver Club, a record and turntable store in the city, which is primarily organising the programme, “In the last couple of years vinyl has picked up quite the following, so when World Record Store Day rolled round this year, we thought that we should celebrate it in a big way.”

The event will feature a number of events and encompass genres of music ranging from jazz and Indian classical to punk and disco. “People often only associate vinyl with one genre of music. We want to ensure that they become aware of the fact that it cuts across all genres of music. So, we have a sarod performance by Vivek Joshi in the afternoon and later in the evening, we have DJs playing punk and disco numbers from vinyl records,” elaborates Manu, who has been listening to records on his grandfather’s record player, then his own, since he was five years of age.

Manu is not the only vinyl enthusiast who will be at the festival, whose exposure to vinyl was at such a young age. Record collector and enthusiast Eddie Tauro also does not remember a time when vinyl was not a part of his life. Eddie, who will be a part of a free flowing chat with Manu and jazz and vinyl enthusiast Sunil Sampath, has not been a part of World Record Store Day before, though he has bought his share of special edition records off e-bay after the event. “In places like the US, UK and Japan, the day is commemorated by releasing a number of limited edition, special records and you can find people lined up outside record stores for hours, sometimes beginning their wait from the night before. Some of those records get sold online later at higher prices and those who cannot be present at the stores keep an eye out for these offers,” he explains.

While DJs playing vinyl may seem like a novel affair for many, for Eddie, it is just par for the course. After all, he explains, it is because of dance clubs that vinyl survived the ’90s. “It was dance music that, helped vinyl get through the ’90s, at least abroad. Most DJs would use turntables and vinyl to play at clubs. Now, vinyl is the largest growing segment of music products, though the production is still not as high as CDs,” he says, lamenting at the same time that not a lot of people in India are yet into the vinyl scene as they are abroad, with only two shops in the city selling new records alongside second-hand ones. “And you need to be a real veteran to spot the good ones among the second-hand records. Most times it’s a gamble and you can end up with a scratchy record.”

Revolver club co-owner Jude de Souza, who first opened the shop almost three years ago, is hopeful that the upcoming festival will give vinyl a much-needed shot in the arm. “It’s not necessarily a bad thing that vinyl has a certain intimidation factor. After all, records are a serious business and you need to take care of your equipment, whether that means taking care of the turntable needle or putting records back in their proper covers,” explains the vinyl enthusiast, who heard his first record — a special Led Zeppelin album — while in college. “I am a music-lover and I wanted to sell high-end musical equipment. When I got into the business, though, I realised that I need to carve out my own niche. I decided to make vinyl records that niche,” he adds.

While on the one hand, he emphasises the importance of taking care of all equipment related to records, Jude, along with his fellow Revolver Club members, has been trying to make vinyl more accessible to music-lovers across the board. “We have regular pop-ups at different events, listening sessions and quizzes on WhatsApp. And everyday, a couple of more people join the group of vinyl-lovers,” says a hopeful Jude.