For love of pooches: Nicaraguans appeal to St Lazarus to cure pet dogs

It is not just pets Saint Lazarus will cure -- Nicaraguans ask for help with their own problems, too. 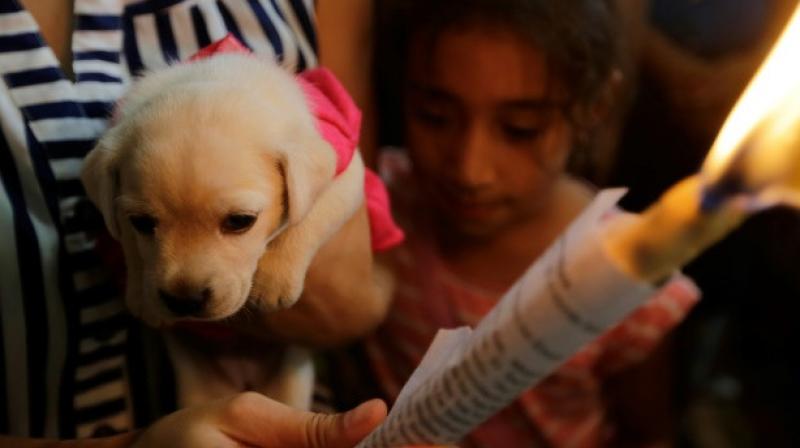 Locals have been putting their faith in the healing powers of Saint Lazarus since the 19th century, when a deadly cholera epidemic struck Nicaragua. (Photo: AFP)

Masaya: Forget the vet -- worshippers in Nicaragua appealed to a higher power to cure their beloved canine friends Sunday, during an annual festival in honor of Saint Lazarus.

Dressed up as angels, sports players, sailors and princesses, dogs in the western city of Mayasa joined their owners for a colorful celebration recognizing the patron saint of beggars and the sick.

"I have come to pay tribute to Saint Lazarus to save my dog," said Rosa Blas, 18, holding her German Shepherd, Osa, in her arms. Osa had a fever and could not walk.

The pets filed down the streets toward the Church of Mary Magdalene -- among them Covu, an enormous pit bull in a Barcelona football shirt who settled near the church's pulpit.

"He had an allergy ... I asked Saint Lazarus for a miracle and now he is healthy," his owner Giovanni Gonzalez told AFP.

And it's not just pets Saint Lazarus will cure -- Nicaraguans ask for help with their own problems, too.

Meanwhile Francisco Cortes, 38, said his son was born covered in sores, but he was cured with Lazarus' help.

Cortes arrived with all of his family and his dog -- a pit bull named Alquiles -- whom he said was also recently cured of diarrhea by the saint.

With the celebrations, Nicaraguans remember the parable of the rich man and Lazarus, a poor man covered in sores who longed to eat scraps from the rich man's table, as dogs licked his wounds.

However, when the two men died, it was Lazarus who went to heaven, while the rich man went to hell for clinging to material things during his life.

"Jesus is always by the side of those who suffer, the poor, the beggar," Father Pedro Mendez explained during his sermon.

Locals have been putting their faith in the healing powers of Saint Lazarus since the 19th century, when a deadly cholera epidemic struck Nicaragua.