The models walked the ramp in shades of grey and black adorning masks, representing the ‘after-life’ theme. 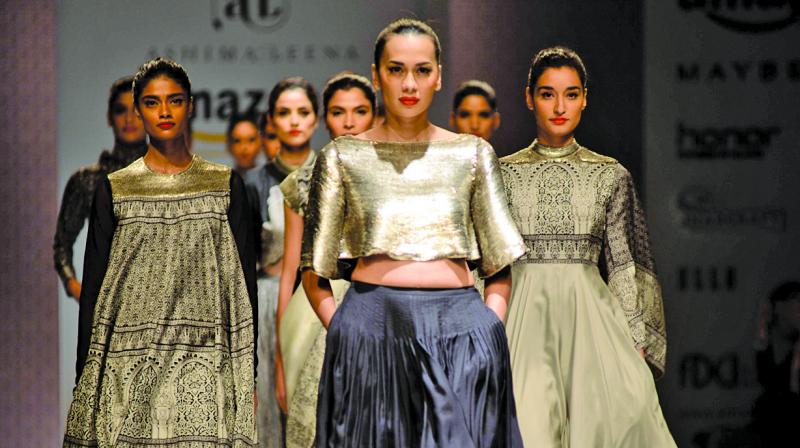 New Delhi: From Victorian era and modern-day nomad to the tones of greys inspired by after-life, day three of Amazon India Fashion Week saw an array of contrasting inspirations.

Karishma Shahani Khan, Sahil Kochhar and Pallavi Singhee opened the day with their vibrant collections. Designer Siddartha Tytler followed with his collection ‘Metamorphosis of the Macabre’. The models walked the ramp in shades of grey and black adorning masks, representing the ‘after-life’ theme.  “I am fascinated by the concept of after-life,  and I tried to capture it in a glamourous, sophisticated and elegant way,” said the designer.

Ashima Leena conjured an opulent twist by interweaving motifs that adorn the architectural realms of Khiva in her collection, ‘Charukesha’.

Talking about being the muse of Anju and walking the ramp, Sakshi said, “I think the confidence came because of my theatre background as there also you are in a direct contact with light with no one visible. I loved all of Anjuji’s creation.”

Namrita Joshipura with her New York-inspired collection transformed the ramp into a subway platform with graffiti, giving it a hip-hop city look. The models wore bomber jackets and sequined shorts.

Actor Alia Bhatt was the showstopper for the designer. She walked the ramp wearing an emerald jumpsuit with sexy, high front-cuts on the bottom and a one-sided shoulder strap. “I think Namrata, Maybelline, and I were all on the same page on what we had to do. I had loads of fun,” said the star.