Use yarn to make wreaths this Christmas 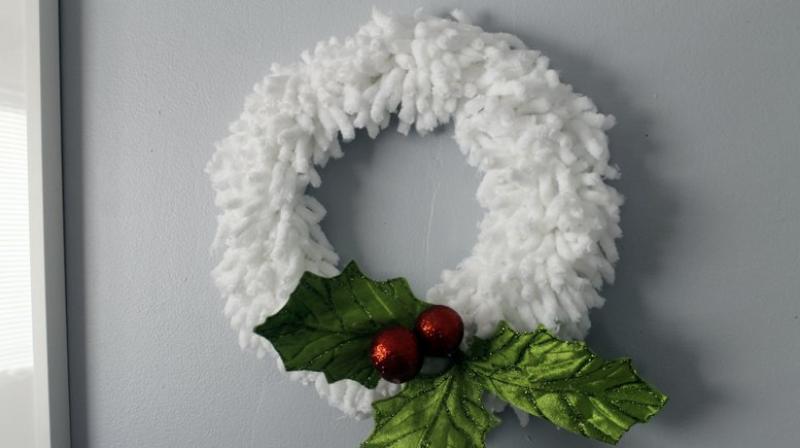 While this technique was time-consuming — it took about an hour and a half — it was easy and mindless. (Photo: AP)

Concord:  Wrapped presents belong under the tree, but wrapped wreaths on doors or walls also can add to holiday decor. In contrast to prickly evergreen wreaths, yarn-wrapped wreaths are soft and fluffy. At their best, they add a whimsical touch that evokes a snowy landscape. At worst, they might you remind you of a bath mat.

The Associated Press tested three methods for using yarn to make wreaths. Each starts with an inexpensive wire frame spray-painted white or another colour to match the yarn. But the methods differ in the type of yarn used and how it is attached to the form. Here’s what I found, with each method rated from 1 to 10, with 10 indicating the least expensive, easiest and best results:

The lifestyle site A Beautiful Mess features an easy to follow tutorial to make a shaggy white wreath adorned simply with a red bow. Jumbo yarn is cut into 7- or 8-inch lengths, and then each piece is folded in half. I slipped the folded end under the wire form and pulled the ends through, making a knot. (If you ever made latch hook rugs as a kid, it’s a similar motion). The tutorial specifically recommends non-shedding yarn, which I unfortunately ignored. I opted for a plush, chenille yarn that ended up spreading bits of fluff all over my house. And while it was nice and thick, it was a bit on the floppy side (hence the visions of bath mats dancing in my head).

While this technique was time-consuming — it took about an hour and a half — it was easy and mindless, good for tackling while watching a holiday movie.

My second project was one of three yarn wreaths featured on the blog Sew Much Ado. For this version, lengths of jumbo yarn approximately 2 feet at a time are woven under and over the rings of the wire wreath, wrapping it tightly and completely. I accidentally used the yarn I had intended for this version for my first attempt at the tied yarn, and had a frustrating shopping experience trying to find more. The product I eventually settled on was more like loosely spun wool roving than yarn, and was a bit tricky to work with. After covering about half the wreath, I figured out that it was much easier to do the weaving if I first wrapped a bit of tape around the end of the yarn (picture the end of a shoelace). After that, it was easier to navigate the rings.

I wasn’t thrilled with the final result, in part because the yarn is ivory, not white, and I wasn’t crazy about the yellow-ish hue. But I liked it more after adding a bit of greenery, berries and a handmade birch bark ornament. And this version, more so than the others, could be hung on a wall year-round and not look out of place.

I was really struck by the way the author of the blog The Navage Patch decorated her wreath with a few small bottle-brush Christmas trees and displayed it against a black chalkboard. Though the tutorial calls for using a foam wreath form, I adapted it to use a wire form since that is what I had purchased for the other two wreaths.

This project uses “loop yarn” — thick yarn with loops attached to it every inch or so — and was by far the simplest project. I just tied the yarn to the wreath and wrapped it around and around until the form was covered. No cutting, no weaving. It did require two skeins of yarn, but the type I used still ended up being a bit less expensive than the cost of the other projects, so overall, this was the winner.