All roads lead to Goa

Biking in the world’s largest motorcycle market, India, has become the stuff of dreams. 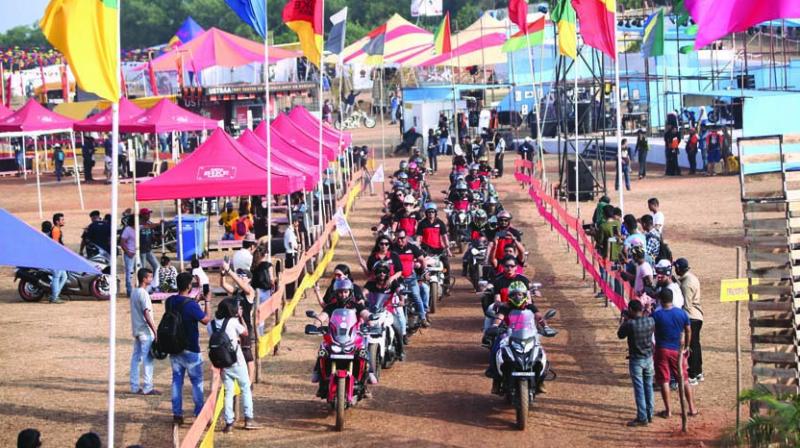 Scenes from the event

It is more than a hobby. It is more than a passion. It is wild. At the recently concluded India Bike Week, a two-day annual jamboree of bike revellers — who only dream, love and live by their motorcycles — we witnessed a fine display of the country’s craze for biking.

Held on December 6-7, over 15,000 bikers arrived at the picturesque Vagator destination in North Goa to be a part of ‘The Great Migration’. It featured a mix of adventure, the motorcycle culture, music, and various biker brotherhoods and sisterhoods.

Top luxury bike brands like Indian, KTM, Triumph, Husqvarna, Mantis, Honda, Harley-Davidson, and Kawasaki, could be seen there. And to witness dangerous and breathtaking stunts performed on them in hilly terrain overlooking the Arabian Sea, was a delight.

“Biking for us is a passion and a journey of life,” Manas Dewan, who was one of the star attractions along with his wife Dr Anuradha, told The Asian Age. To celebrate their 18th wedding anniversary, the duo quit their respective corporate jobs and toured 18 countries in Asia, the Middle East and Europe on the bike for 100 days, covering 20,000kms! This journey was appropriately called ‘Dosti on Wheels’ and in discovering different nations, cultures, languages, music, cuisines, the couple discovered themselves.

“This world trip opened our eyes as we met up with strangers both rich and poor, refugees and gypsies, and stayed with them,” Dr Anuradha said, adding that they never stayed in a hotel.

“These encounters, which bonded us with them, opened our heart and soul as a refugee shared with us his last sandwich in Austria,” the couple recalled.

Anu and Manas started from Spain, arrived at Portugal and France, and then moved towards Germany, Austria, Switzerland, before arriving at Italy and the Vatican. Then they explored the eastern European countries of Slovenia, Croatia, Slovakia, Czechia till Hungary, Serbia, Bulgaria, Greece as well as Turkey.

Also present at the event was Dr. Maral Yazarloo Pattrick, Iranian fashion designer and marketing professional, who toured all seven continents, covering 64 countries spread across 110,000kms — a first for any Asian or Middles Eastern rider. She met her love and married him in Machu Picchu in Peru. “Then, when in South Africa, I discovered I was pregnant but continued my riding,” Pattrick said. “I started off my journey on my bike as a single person, but came back married with a baby,” she said with a laugh.

This woman, selected by the BBC as one of the 100 powerful and influential women of the world, entered Iran, where women cannot ride in public, on her bike. “I was the first Iranian woman entering the Iranian border and crisscrossing the entire country to change the law and give women the freedom to ride the bikes,” Pattrick said. She hopes that her country would soon pass a law in favour of women driving.

“Being at the rally was entering another world,” said Zubair Poonawalla, a public relations professional who was part of a 79-member biking group from Mumbai. This group rode to Pune and back, a distance of 500kms, to participate at the extravaganza.

There was a parade, he said, where all bikers got together to enter the venue. “The two-day event was full of entertainment, meeting fellow bikers, new bikers, making friends and taking back home lovely memories,” Poonawalla said.

Dr Arun Thareja, a 58-year-old physician, and Deepak Gupta, 56, a businessman known among bikers as a ‘mountain man’ — both from New Delhi — covered 800kms to reach Pune in two days and remaining 500-km lap on the third day to reach the venue. The duo rode on the powerful Indian FTR 1200 S bikes from Delhi.

"Biking is independence, it is adventure. When you're on your bike, you're living life absolutely in the moment. It is one of the reasons for the stunning growth of the Indian biking community over the last six years,” said Martin De Costa, Director of India Bike Week, whose ride happened to be the Triumph Tiger 800.