The awkwardness of standing next to strangers was slowly fading. Then someone turned up the tempo of the jazz. 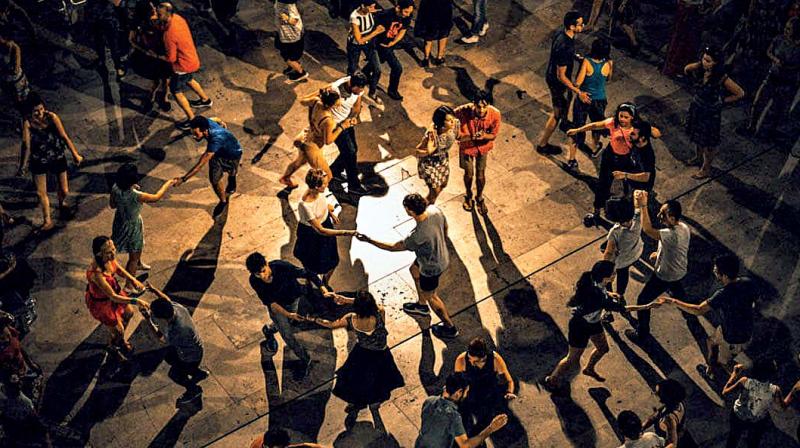 Lindy Hop is easy to learn, and you can be spontaneous with a lot of the movements – as long as you get the basics right, of course.

Alone, with two left feet and a perfect wallflower attitude, I walked into a Lindy Hop Social curious to find out what a ’20s American dance form was doing in South Mumbai.

A social seems like an idea from a bygone time. Sure, we’re not averse to meeting strangers today, but in the digital age, it feels more normal for us to swipe our way through the process. So I didn’t imagine I would see a lot of people at a Lindy Hop Social on a Sunday evening. I was surprised – the little room above a club was filled with mostly young people, all shuffling in corners.

A lot of them, like me, had taken heed to the description on the Facebook page that said you could come alone and you could be a total beginner. Some had even made an effort to dress up a little bit, keeping with the jazz theme. There was a general nervousness running through the room as people scanned each other as if there was a collective realisation among the newbies that maybe a dance form from the ’20s did not a fun party make.

My sense of regret grew when a man in a beret walked into the centre of the room and asked people to choose random partners of the opposite sex. I realised that, deep down, I hadn’t come here because of any love for dance. It was more curiosity – would people have fun alone at a dance party in this city? I had patted myself on the back for having made the brave move to come by myself, but now I was going to have to dance, matching steps with a person who I’d met merely seconds ago.

The instructor led us, tap, tap, tapping our way through two hours of a beginners’ class. There was slow jazz playing as we giggled and tried to keep up. There was small talk while I nervously tried to avoid stepping on my partner’s legs. But the room got warmer and the smiles a little friendlier as we danced along. The awkwardness of standing next to strangers was slowly fading. Then someone turned up the tempo of the jazz.

This was when it became really fun.

The instruction part of the night was soon over, and everybody was asked to take turns dancing with various people in the room. Some stepped on my feet; I bumped into a lot more. I was flung around, spun, and awkwardly moved from one step to another. Some told me not to hop (it’s called Lindy Hop, man, what else will I do!), some wouldn’t let me stop dancing. Sometimes I just stood and watched while my partner, a better dancer, did fancy moves that I could barely imitate. One or two even snuck in a salsa or jive move. It was total anarchy!

My legs hurt from dancing, my jaw ached from smiling, and I was sweating from head to toe, I did not want to stop dancing. I eagerly waited for someone to ask me for a dance, and sometimes I made eyes till they did. Over the course of the evening, a room full of strangers was slowly transforming into a room full of friendly faces.

By then I had figured why this event was so popular and why it had drawn so many people every Sunday night for over a year. In a culture where it’s not easy to make friends of the opposite sex by just going out, these events gave people that avenue and an alternate form of socialising. Chaitanya Senapathi, instructor, organiser, and administrator at these socials, agrees. He says that in a city so huge, it can be tough to find groups to socialise with. A lot of people come by themselves and leave having made friends.

Lindy Hop is easy to learn, and you can be spontaneous with a lot of the movements – as long as you get the basics right, of course. A social is a perfect setting where the steps are easy and the dance uninhabited. It’s a party without the need for mingling, very little need for awkward small talk or knowing anyone. Some came here for the dance, but a whole lot were looking for a fun diversion. Just like me.

Regardless of who they were, or where they came from, everyone seemed to like that there were no torturous lessons, no fear of failure, and zero judgments. I could not believe that I had interacted with so many people and, having zero time to assess their flaws in the middle of this maddening dance, was going with the flow and having fun. I hadn’t even touched my phone for four hours now.

As the clock drew closer to midnight, the crowds started thinning. A few people came by and waved goodbye with a smile. No numbers were exchanged, and there was only one Facebook friend request. For the rest, it was a fun night. I certainly didn’t feel like a dance professional, but I was sweaty and content. Wonder if I’ll sign up for the dance classes now!