The new owner was not identified. 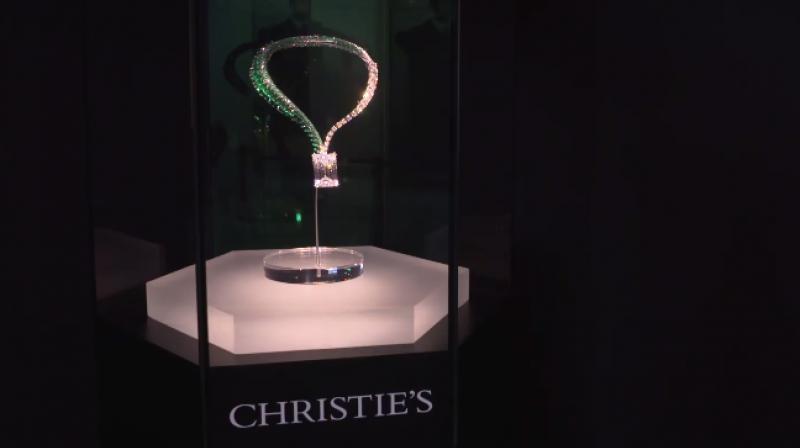 The necklace, known as the Art of de GRISOGONO, Creation 1, has a rectangular diamond weighing 163.41 carats as its centerpiece. (Photo: Facebook/de GRISOGONO)

An emerald and diamond necklace set with the largest flawless white diamond ever to come to auction has sold for a world record 33.5 million Swiss francs ($34 million), the star lot at a Geneva sale, Christie’s said.

The necklace, known as the Art of de GRISOGONO, Creation 1, has a rectangular diamond weighing 163.41 carats as its centerpiece. The stone, found in Angola in 2016, is framed on one side by rows of diamonds and on the other by pear-shaped emeralds.

The buyer, bidding by telephone at Tuesday night’s sale, will remain anonymous, Christie’s said in a statement. The pre-sale estimate was $25 million to $30 million.

The diamond is more than 40 percent larger than a flawless white oval diamond of 118.28 carats sold by rival Sotheby’s in 2013 in Hong Kong for $30.6 million, yet the price fails to reflect that, said Tobias Kormind, managing director of 77Diamonds.com, Europe’s largest online diamond jeweler.

“This is a worrying sign for the top end of the diamond market suggesting it is not as immune as one would have hoped to downward price pressures caused by global factors such as the Chinese slowdown, Russian sanctions and lower oil prices,” he said in a statement.

Called Le Grand Mazarin, it takes its name from Cardinal Mazarin, who become France’s Chief Minister in 1642 and assembled a gem collection. The stone then became part of the French crown jewels.

During its 250 years in the French Crown Treasury, it belonged to four kings (Louis XIV, Louis XV, Louis XVI and Charles X), two emperors (Napoleon I and Napoleon III) and two empresses, Christie’s said. It was sold to Frédéric Boucheron, one of the favoured jewelers of France’s great families, at auction in 1887 before passing into a private collection.

The new owner was not identified.

At Sotheby’s on Wednesday, the star lot will be “The Raj Pink”, the world’s largest known fancy intense pink diamond. Found in South Africa in 2015, it weighs 37.30 carats and is estimated at $20 million to $30 million.