Weaving art back to life

National-award winning documentary Bunkar: The Last of the Varanasi Weavers highlights the struggles of the last generation of weavers. 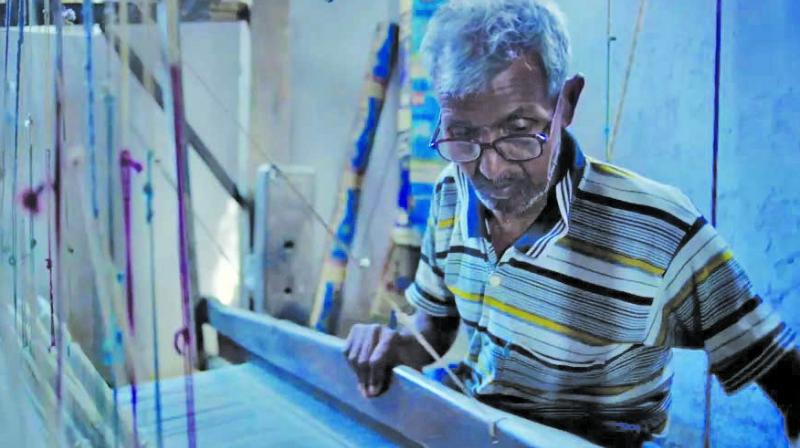 One of the oldest and finest producers of luxury textiles, Varanasi handloom carries with it a history of the craftsmanship that has been passed down from generations. With different gharanas defining various designs, the weaving tradition can be traced back to the Vedic times. Once termed as a royal job, however, the present generation of weavers has slowly moved away from the loom.

And director Satyaprakash Upadhyay’s debut feature documentary Bunkar: The Last of the Varanasi Weavers highlights the nuances of the community and the issues faced by artisans. A 2019 National Award-winning film in the Best Arts and Culture Film category, it took two years of research and making, and throws light not only on the heritage value, but also on its declining worth.

“Most of the information on the Internet is unidimensional, but spending time with weavers, has changed the narrative for me. While it remains a fact that the pay is less, the influx of power loom has reduced the value of handloom. In turn, the respect for the craft is gone,” rues Upadhyay, who was present for the screening at Ladies’ Wing, IMC Chamber.

The director met over 20 weavers and ex-weavers — now turned rickshaw drivers or caterers — and spent hours talking to them. The holy city, that once boasted over 20 lakh weavers, is now left with only 5000. “I spoke to each one of them for more than three hours. I kept asking things as I was trying to learn about them. My interest was to find out how they started it, how much education they have about it. Whether they had any formal education or in an indirect way, and the problems they are facing,” he shares.

The thread connecting every weaver’s story was the lack of respect for the craft. As one craftsman pointed out in the documentary, a handmade Rolex watch is sold for lakhs whereas a handmade saree is bargained for cheaper price.

“While for some it paid less, but for the majority, it wasn’t a white-collar job. The deserved respect isn’t offered, and people look down on them. During the research, I met one weaver who said that no one wants to marry a weaver’s daughter anymore as they are considered poor,” sighs Upadhyay. One of the ex-weavers shown in the film has dismantled his loom and tucked in the closet, and he now works odd jobs to earn a better livelihood.

A piece of history from the community that we often forget is saint Kabir’s connection to the weaver community, and the inter-connectedness of the Hindu-Muslim community. Produced by Sapna Sharma, the film beautifully shows the bond of faith through the narration of weavers preserving the art for generations.

Right from putting to picture the Varanasi handloom’s ancestral value to its current state, the documentary elicits hope that there is time and much can be done by preserving and patronizing this art. “I am a very positive person and the film shows the same. I wanted to present what they felt, but there is an urgent need to understand the state. Be it anywhere in the world, just respect the handloom. Don’t go by a weaver’s appearance, but the quality product they are offering,” says the National Award winner.

As for his future projects, Upadhyay wishes to take the film to more international festivals while working on another documentary. “I am also writing a Hindi feature film, Kup Manduk, that I have been working on for five years,” he concludes.