His battle to ballet

Mostly considered a ‘feminine’ dance form, it is no surprise that ballet is more often than not, taken up by women. 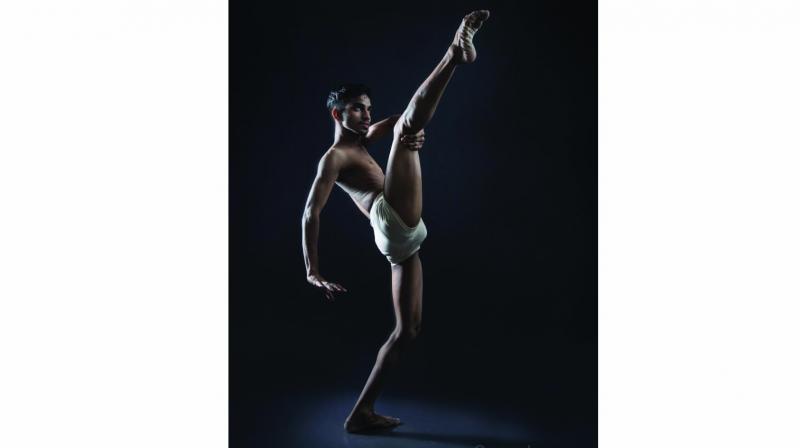 He started realising his love for dance, as he would spend hours watching dance performances on TV and replicating them at home.

Recently, around 300 male and female ballet dancers gathered outside the studio of Good Morning America in NYC’s Times Square and peacefully held a massive open-air ballet class. If you’re wondering whether it was the beautiful weather that brought out all these dancers under the open skies of The Big Apple, you’re wrong. The dancers were actually protesting US TV host Lara Spencer’s insensitive comments about Prince George‘s diversified curriculum (which includes ballet) at Times Square, to send out a message that boys can dance too.

Mostly considered a ‘feminine’ dance form, it is no surprise that ballet is more often than not, taken up by women. But, when have dreams cared for gender stereotypes or society? So, when 18-year-old Dipesh Verma, a grocer’s son from the small town of Siliguri discovered his love for ballet, it was clear that he would either have to go big or go home. With a knack for dance from a very young age, Dipesh has always known that he wanted to pursue dance.

He started realising his love for dance, as he would spend hours watching dance performances on TV and replicating them at home. “I was in a boarding school in Bagdogra when I was four and there I would take part in any and every show to perform my dance routines. That’s how my interest in dance began to expand,” recalls Dipesh. It wasn’t until he was nine that his sister found a nearby class to attain formal dance lessons. He elaborates, “When I joined the academy, I started to learn freestyle dance, mostly street-based. At that time ballet and contemporary were not very common where I stayed.” But Dipesh’s dreams were not ordinary or even conventional. He chose to pursue ballet out of all dance forms.

Speaking of inspirations, Dipesh says, “When I saw Sophia Lucia dancing on Youtube, I fell in love with her work. That’s when I decided that I really wanted to do this for the rest of my life.” His first ballet teacher, Yehuda Maor, became a major rock in his life, by training and supporting him.

Hailing from a middle-class background, dreaming big seems foolish. Specially, in a country like India where ballet is seen as a form of 'western classical' and does not get a lot of audiences. On top of that, finding a professional male ballet dancer in India is like looking for a needle in a haystack. “My friends thought it was feminine of me to pursue ballet as a dance form. They would tell me how boys don’t do ballet and so on,” says Dipesh. His parents were not supportive of his passion either. “It was very difficult for me as my father would get very angry. So, my sister had to would sneak me to dance lessons by telling my parents that I am going for my math tuition class,” says Deepesh. He would practice dancing only when his parents were asleep or out of the home. “I used to go out to any empty ground and practice there sometimes. Since no one in my family had ever made a profession out of performing arts, it was difficult to convince them,” he adds.

But Dipesh is a shining example of how one can radiate in darkness. He was all of 15 when he got accepted to Imperial Fernando Ballet Company.  Earlier this year he bagged six ballet scholarships from institutes like Maryland Youth Ballet, Nashville Classical Ballet Academy, Australian Ballet School, Berkeley Ballet Theater and Houston Ballet Academy. Dipesh plans to take his dream of ballet to Paris Marais Dance School because of the ample scope in the world of dancing that Europe offers.