At 39 crimes against women every hour, India is among the most unsafe countries in the world 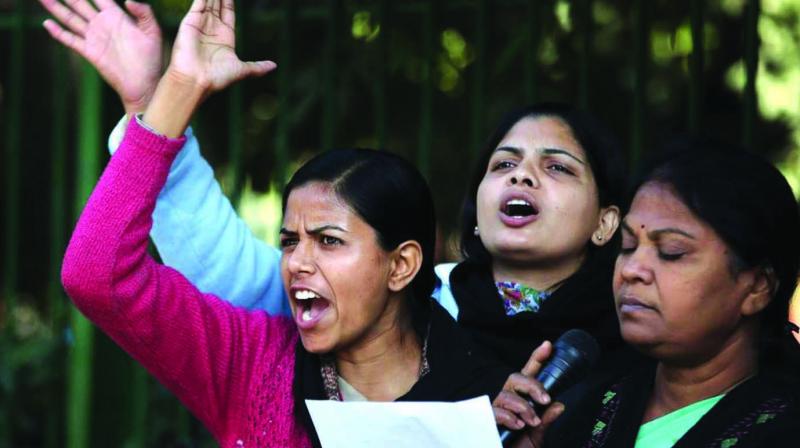 Awareness that something is wrong is critical to change the norms and practices that perpetuate violence.

“She asked for it”.“If she lost weight she’d be pretty”.

“She got promoted because of her looks”....these statements reflect the usual body shaming, causal sexism, and blatant objectification that women and adolescent girls, go through every day. Be it for the clothes they wear or the opinions they voice; the statistics for harassment of women in India tell a horrific story.

At 39 crimes against women every hour, India is among the most unsafe countries in the world. Forty per cent of Indian women face some sort of violence or harassment before they turn nineteen, and more than 90 per cent of women and girls have faced sexual harassment – be it in public spaces or online. A middle aged woman in UP was beaten, stripped, and paraded naked for resisting harassment.

Be it Zaira, Mithali, or the unnamed woman in UP. Be it women at the highest echelons of power or just your every day school girl; this is no country for women.

Rooted In Psyche
The problem however, runs deeper than harassment. It is the casual acceptance of sexual abuse as a normal occurrence that happens to everyone. Breakthrough, an organisation that works to change the norms and practices that perpetuate violence against women and girls, conducted a comprehensive research, which found that 90 per cent of the women who face harassment do not report it. Nor do they take any action against it. Intensive psychological studies have shown that there are several reasons why women choose not to take action - they feel ashamed and embarrassed, the issue is trivialised due to conditioning and statements such as “boys will be boys”, and they fear the consequences of reporting.

The situation is even worse for the adolescent girls who are dealing with issues of consent, safety, stigma, sex, segregation, and harassment all on their own with no one to turn to or talk with.

How do we give these women and children courage to stand up and speak out? How do we give them assurance that they will be heard and not judged? That’s a solution we all must address collectively.

Turn the tide
While there are some advocates for segregation, surveillance etc. to address sexual harassment, these are just band-aid solutions not effective in the long run. There are no quick fixes to this issue and we must focus on bringing about long-term mind-set change.

Pinpoint the issue: Preventing abuse of women and girls today is less about drafting laws and more about changing deep rooted cultural norms and practices. How do we put a stop to the victim blaming mentality? How do we make people realise that sexual harassment isn’t somebody else’s problem and it won’t go away by ignoring it, hiding it or denying someone the right to step out?

Building awareness
Awareness that something is wrong is critical to change the norms and practices that perpetuate violence. Workshops, meetups, and coffee table discussions can be hosted to hear out stories. Influencers and strong personalities can talk about how they have dealt with abuse. We have found that using popular culture to change culture is often the most effective way to do this. Over the years, we have used music videos, films, street theatre, puppetry, and digital and mass media campaigns as vehicles to build awareness and change behaviours.

Encourage dialogue
Safe spaces – online and physical - can give voice to many unheard stories, heal old wounds, and pave the path for a better tomorrow. We especially need intergenerational dialogue between adolescents and their parents, so that girls have a support system within their families.

Mobilise men and boys
We need to see men and boys as allies, engaging them in building a new narrative that is gender equal. Men and boys are often victims of violence and toxic masculinity that perpetuate the cycle of gender-based violence. Through dialogue, men and boys can be engaged in questioning existing gender stereotypes that are harmful to both men and women.

Empower adolescents
It’s also important to address gender attitudes and behaviour when views are still malleable. Working with adolescents to discuss the rights and agency of girls, embedding leadership skills and confidence in young girls is vital to strike at the root of gender-based discrimination and violence.

There is a need to ensure greater institutional response and accountability. The reporting mechanisms must be made more accessible and receptive to complaints.

There is a need to spread awareness on legal forms of redress (such as helpline numbers) and ensuring that the law is upheld.

This is a road or clearly defined pathway that so far has been not been well travelled, perhaps because the minefields are still many.   But with many more organisations and individuals leading the way, this narrative can and will change. Are you up for it?