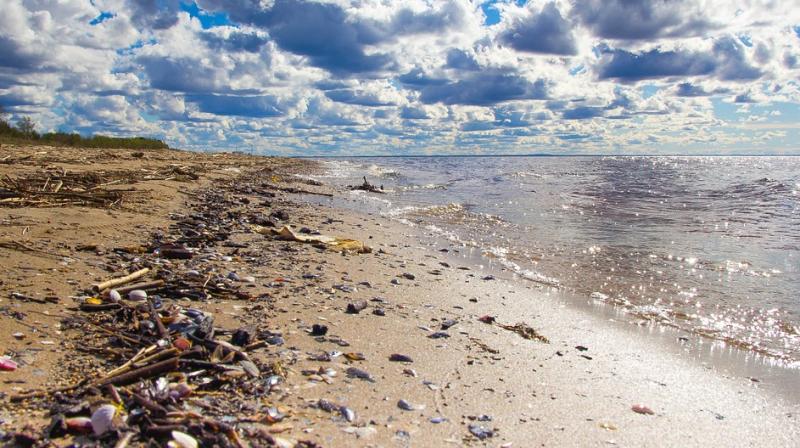 Remote islands in the Indian Ocean are being choked with the excessive plastic debris that gets washed on shore from the oceans. (Photo: Representational/Pixabay)

Cocos Islands, a small group of islands in the Indian Ocean, is slowly dying because of plastic. The island has a population 600, but marine scientists have found 977,000 shoes and 373,000 toothbrushes on the island’s beaches.

After a further comprehensive survey of the washed up waste, a staggering 414m pieces of plastic waste weighing 238 tonnes was discovered on one of the most remote places on earth. A study published in the journal ‘Nature’ revealed that the exponential increase of global plastic pollution was due to the use of single-use plastic products.

The study’s lead author, Jennifer Lavers of University of Tasmania said remote islands with barely any human population are indicative of the amount of plastic waste that flows around in the earth’s oceans.

Also Read : Antarctica’s ice is melting faster than ever before

“Islands such as these are like canaries in a coal mine and it’s increasingly urgent that we act on the warnings they are giving us. Plastic pollution is now ubiquitous in our oceans, and remote islands are an ideal place to get an objective view of the volume of plastic debris now circling the globe,” Lavers said.

The study also revealed that the amount of garbage present was 26 times more than the visible amount. Previous surveys conducted only assessed the garbage present on the surface, thus drastically underestimating the scale of it. The remote Henderson Island in the South Pacific was one of the places most affected by plastic pollution.

“Our excessive and unrelenting demand for plastics, coupled with ineffective policy and waste management, has resulted in myriad negative effects on marine, freshwater, and terrestrial environments, including entanglement and ingestion of debris, and subsequent exposure to plastic-associated chemicals,” the report stated

Unfortunately, the situation on the Cocos Islands is not unique. Significant quantity of debris on the island was attributed to single use plastics. The islands and coastal areas around the Arctic and Antarctic Ocean also reflect the acute symptoms of an otherwise rapidly increasing environmental hazard. The local people on the islands have struggled to find an appropriate place to dispose of the garbage washed ashore from the oceans.

“In the absence of rapid and meaningful change, anthropogenic debris will accumulate on beaches, with impacts increasingly felt by biodiversity and marine plastic mitigation will remain a perpetual game of catch-up,” the report also stated. “Mitigation initiatives, including policy, should be mindful of the challenges faced by remote islands, and the communities that reside there.”

Despite the warning signs, global production of plastic continues to increase even today. “An estimated 12.7m tonnes of plastic entered our oceans in 2010 alone, with around 40% of plastics entering the waste stream in the same year they’re produced,” another report said.

“As a result of the growth in single-use consumer plastics, it’s estimated there are now 5.25 trillion pieces of ocean plastic debris.” “The scale of the problem means cleaning up our oceans is currently not possible, and cleaning beaches once they are polluted with plastic is time consuming, costly, and needs to be regularly repeated as thousands of new pieces of plastic wash up each day.”