Swimming against the tides

Braving the Arabian sea and his own disability, swimmer Shams Aalam created a record for the longest open-water swim by a paraplegic person. 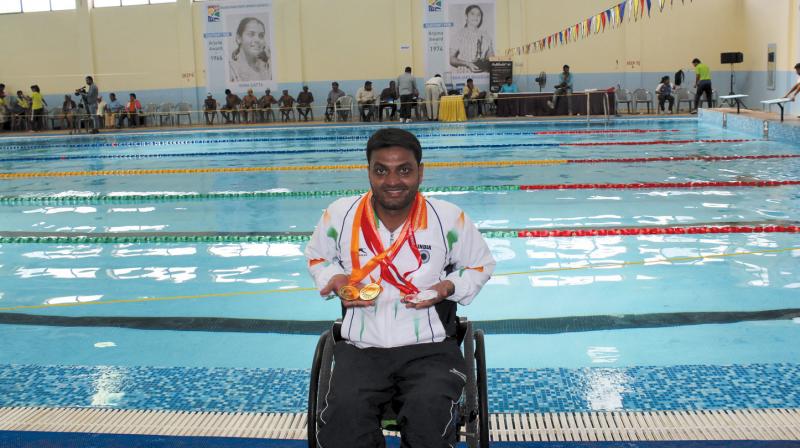 Shams Aalam’s arms cut through the water of the swimming pool like powerful pistons as he goes through his daily two-hour practice session, cutting lap after lap across the 50-metre surface.  He cannot remember a time when he didn’t swim, though his mother tells him that he took to water like a fish at the age of four in the rivers of his native village in Bihar. Now a professional open-water swimmer, the journey to this point has been a long and arduous one for Shams, who had not even considered swimming a sport in his younger years.

As an adult, his life centred on Karate — a black belt holder and a qualified coach with over 40 gold medals to his credit — the mechanical engineer was enjoying the life of his dreams. But in 2010, an acute pain in his back led to further diagnosis, which revealed the presence of a benign tumour in his spinal cord. Numerous surgeries later, the lower part of his body was left completely paralysed, a predicament that is a nightmare for any athlete. Cut to 2017, Shams braved the immobility of the lower half of his body and the sea at Candolim beach in Goa to break his own record for the longest open sea swimming by a paraplegic. The 30-year-old Mumbaikar swam a length of eight km in the seas along the Sinquerim-Baga-Candolim belt in four hours and four minutes.

Recalling the turning point in his life, when he was operated for the tumour — unfortunately unsuccessful — he reveals, “The doctors said I’ll be fine in 15 days but I just wouldn’t feel my legs move. That’s when I panicked; further medical reports revealed that the tumour was still present. I got operated for the second time, this time the surgery went on for 21 hours but the results were the same. I still couldn’t feel the lower half of my body function.”

With a degree in mechanical engineering as a young boy with big dreams, everything spiralled down for Shams, “The doctors assured I would be standing on my feet in 20-days but I was bed ridden for over five months. Everything shattered in that instance when I couldn’t move my legs,” he reminisces.

It was only after joining the rehabilitation centre for paraplegics for over a year that he regained his confidence. During the National Annual Day function at the centre, he met Raja Ram Ghag, another paraplegic who inspired him to take up swimming. After initial apprehensions, he visited Dadar’s Mahatma Gandhi Pool to try his luck.  Attendants at the pool evidently weren’t convinced of the fact that a paraplegic would swim; convincing them was another challenge he faced. “People there weren’t convinced that a wheelchair user could swim, but I convinced them to at least let me try and then they would send help if a mishap happens. The moment when I first entered the pool, I swam from one end to the other and about 50 metres and immediately felt my muscles relax and there were no spasms under the water.

“I had all my childhood memories flashing back.”

His first stint with open sea swimming was in Mumbai, which he could not complete. That for him provided the motivation to try harder, “It was a stretch of five km at Gateway of India, but I couldn’t finish the entire stretch and that was a huge disappointment. I then began practising more within a few months participated in Malvan Open Sea Swimming for a stretch of two km and successfully completed the event,” he says. Swimming against the tide in an open sea is much more difficult than swimming in the pool and to keep up the stamina, practice is his only mantra.

Shams’ journey has now become an inspiration for hundreds. However, the athlete admits that it would not have been possible without the support of his family. “At first, my parents were very depressed, especially since I was supposed to get married before the accident and after it happened the wedding was cancelled. My sister, on the other hand, was always there for me. And eventually, my mother also started to see that whatever happens, happens for a reason. Now when she meets parents of other paraplegic individuals at events, she motivates them that nothing is impossible and they too have to keep faith,” says Shams proudly.

His love for Karate will always be unmatched though, he asserts, “After being wheelchair-bound, I researched and realised that there is wheelchair karate practiced in Ireland and Australia. I got in touch with them and in 2017 with nine nations participating in Asian Karate Championship, I bagged a Gold for India in my category. Once I’m back in Mumbai, I wish to spread more awareness about wheelchair karate and that being disable doesn’t been you will be physically incapacitated,” says Shams who is currently pursuing an MBA in Chennai.

Fully ready to live life to the fullest, the paraplegic athlete has only one message for the government, “I’d like to request the government to make my country accessible. As a paraplegic, I too want to travel the world, see my country, experience different emotions and this will only be possible if the country is accessible for people with disabilities,” he signs off.