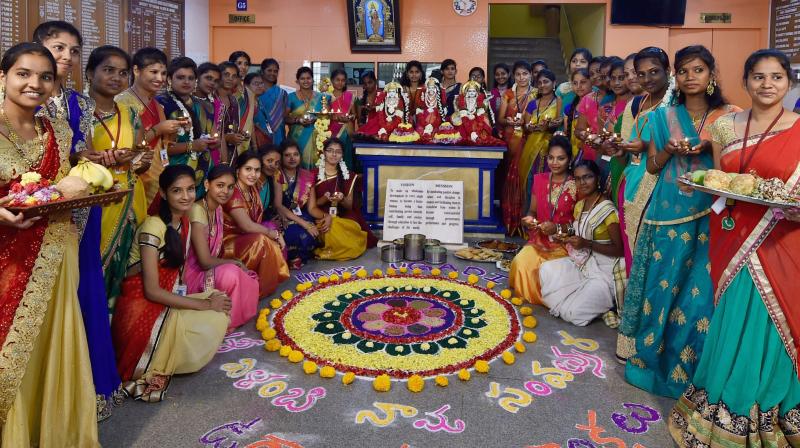 People in Maharashtra celebrated the spring-time festival of Gudi Padwa -this marks the traditional new year for Marathi Hindus- with traditional fervour and welcomed it as per the Shalivahan Shaka (luni-solar) calendar.

Households across the state witnessed hectic activities with family members erecting the traditional 'Gudi' a long bamboo stick with new silk cloth, garland and a dangling neem twig. It also has a silver or metal pot on it.

As per belief, the long 'Gudi' symbolises victory and inspires people to prosper materially and spiritually.

Not just Gudi Padwa, the festival is known by different names in different states like Samvatsar Padvo, Yugadi, Ugadi, Cheti Chand or Navreh. It is known as Sajibu Nongma Panba Cheiraoba in the Northeastern state of Manipur.

The women dish out sweets like 'Puran Poli' and 'Shrikhand' along with 'Aambe daal' and 'Sunth Paak'.

A number of stories are associated with the festival, prominent among them being the "theory of creation" and also the day when Lord Ram returned to Ayodhya after defeating King Ravana in Lanka.

The year begins on the first day of Chaitra of the Hindu calendar named as Shalivahan. It is named so after King Shalivahan, from Paithan in Maharashtra.

While the traditional feast includes dishes like Shrikhand and Puran Poli, the Konkanis make Kanangachi Kheer which is a sweet dish made of sweet potato, coconut milk, jaggery and rice.

People start their day with eating neem leaves, they believe doing so purifies the blood and strengthens the body.

Chhatrapati Shivaji Maharaj started celebrating Gudi Padwa after his victory, and it was him who initiated the tradition of raising the Gudi.