This festival enters its 20th edition and is celebrating the 150th birth anniversary of Mahatma Gandhi. 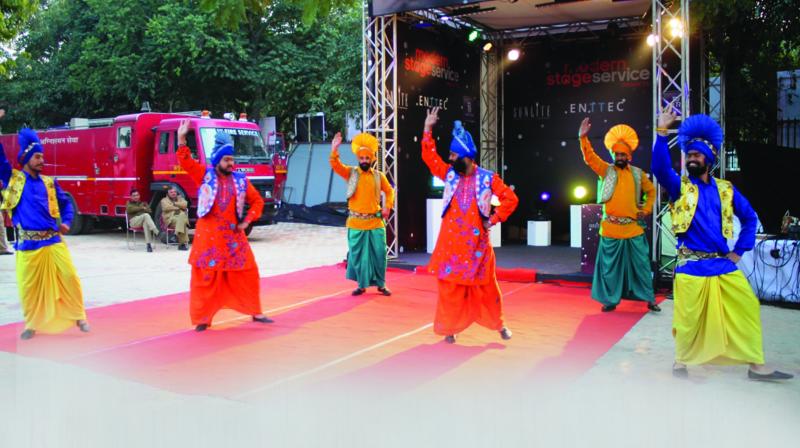 The 21-day long festival this year has included plays in Hindi, English, and other regional languages.

Bharat Rang Mahotsav (BRM), the largest theatre festival in Asia, organized by the National School of Drama (NSD), has brought its bouquet of plays, interactive sessions, and other cultural events to cheer up the winter afternoons of theatre enthusiasts in the city.

The International Theatre Festival (ITF), which began on February 1 in New Delhi, has concluded on February 21. The ITF is offering a diverse range of productions comprising 111 shows and allied events such as ‘Director’s Meet’, ‘Living Legend’, and ‘Master Class’.

The inaugural ceremony was held at Kamani auditorium on February 1, followed by the performance of ‘Karanth ke Rang’, directed by Amod Bhatt.

The 50 minute long performance was medley of songs composed by late Mr B.V. Karanth, a stalwart of Kannada and Hindi theatres. Mr Karanth, who was a prolific composer of songs and scripts for theatre, also directed and acted in many productions.

The festival, which enters its 20th edition in 2019, is celebrating the 150th birth anniversary of Mahatma Gandhi, along with 4 plays to be staged on the life, philosophy, and principles of the ‘Father of the Nation’. The festival is hosting 69 Indian and 15 foreign plays across India.

The national capital is hosting 89 plays: 25 plays in Hindi, 16 in Bengali, 5 in Kannada, 2 in Marathi, 2 in Odia, 2 in Gujarati, 2 in Manipuri, 3 in English, 2 in Assamese, 2 in Malayalam and 1 each in Maithili, Telugu, Nepali, and Sanskrit, in addition to 15 foreign plays, the festival also brings 8 folk performances to theatre aficionados in the city.

The 21-day long festival this year is including plays in Hindi, English, and other regional languages. International productions from countries such as Bangladesh, Poland, Russia, Sri Lanka, the Czech Republic, Italy, Nepal, Romania, and Singapore as well as non-verbal, folk, and multi-lingual performances will enthrall the audience during the theatrical spectacle.

Apart from the spellbinding performances and interaction with thespians and eminent personalities from the world of theatre, the festival in Delhi will also have 2 international and national seminars on theatre. The national seminars to be held in Delhi will attend to the topic ‘Is Modern Theatre Inclusive?’ and will hold sessions dedicated to ‘Notion of State and Representation’, ‘Unrepresented Form’, and ‘Non-Governmental Curating and Funding Policy’.

Besides, the NSD campus is buzzing with street plays, ambience shows, and ‘Theatre Bazar’, a motley of stalls offering a range of products and culinary delights. The youth forum shows will comprise performances by dramatic societies of nearly 50 colleges in Delhi while ambience performances will bring folk dance and other traditional performing art forms.

“The art of theatre is the oldest and the strongest medium that conveys human emotions in a manner that defies temporal boundaries. We are delighted to usher in the Bharat Rang Mahotsav to its 20th year and have made all efforts to bring a selection of quality plays, choosing the best out of 960 submissions. There are 9 folk performances being presented in Delhi as well as invitee plays and productions in regional languages. We have tried to accommodate as many young theatre enthusiasts as we can, since the institution aim to foster the growth of young talents through the platform of BRM,” said Suresh Sharma, Director In-charge, National School of Drama (NSD).

Besides, the NSD campus is buzzing with street plays, ambience shows, and ‘Theatre Bazar’, motley of stalls offering a range of products and culinary delights. The youth forum shows will comprise performances by dramatic societies of nearly 50 colleges in Delhi while ambience performances will bring folk dance and other traditional performing art forms.