Life   More Features  18 Feb 2018  What does a bear do in the Alaska woods? Disperse seeds
Life, More Features

What does a bear do in the Alaska woods? Disperse seeds 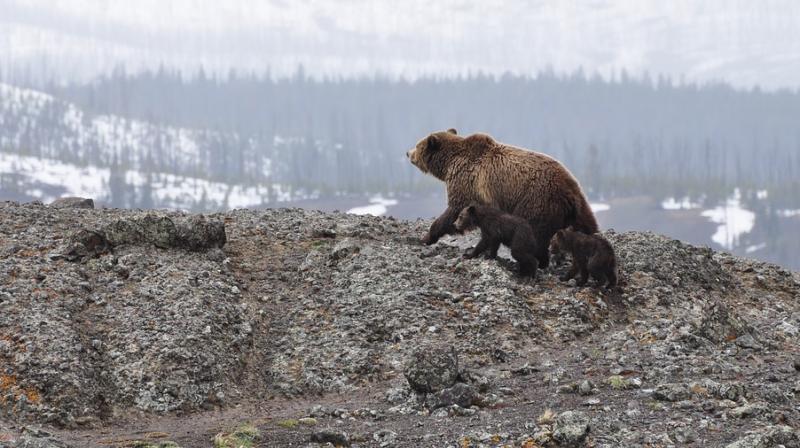 ANCHORAGE, Alaska: Does a bear leave scat in the woods? The answer is obvious but the effects on an ecosystem may not be.

A study by Oregon State University researchers concludes that brown and black bears, and not birds, as commonly thought, are primary distributers of small fruit seeds in southeast Alaska, spreading the seeds through their excrement. "Bears are essentially like farmers," said Taal Levi, an Oregon State assistant professor. "By planting seeds everywhere, they promote a vegetation community that feeds them."

Seed dispersal is a key component in the understanding of any ecosystem, Levi said. The study is the first instance of a temperate plant being primarily dispersed by mammals through their gut, Levi said. The finding suggests repercussions for plant life when bears are removed. Brown bears, or grizzlies, flourish in size and numbers in the Tongass National Forest, America's largest, because they gorge on spawning salmon. As they wait for fish to enter streams, they eat berries.

Levi and graduate student Laurie Harrer, the study's primary author, set up motion-triggered video cameras to detect what was eating berries. The collected bear DNA from saliva left on plants after berries disappeared. They recorded birds picking off a few berries at a time but bears gulping them by the hundreds. When brown bears shift to eating fish, black bears move into berry patches.

Both bears, through their scat, disperse fruit seeds by the thousands, profoundly affecting what grows in the forest, according to the researchers. Rodents that find bear scat further disperse seeds, burying them in caches a few millimeters deep, Levi said. If rodents lose track of caches, there's a chance for new plant growth.

It's an intricate system starting with salmon attracting bears, Levi said. Laura Gough, an ecologist at Towson University who has conducted research for more than 20 years on how plants interact with other organisms in Alaska's tundra, said a lot of ecology research focuses on uncovering those relationships and how whole systems change if they're disrupted.

"When you think about that, if the species is an important food source, then if that plant should diminish in abundance, there could be a whole suite of changes to that ecosystem," she said. When she read the study, she said, she thought of the dodo bird stories she tells to students in biology classes. The extinct birds spread seeds of certain plants.

"When dodos went extinct, those plants basically went extinct as well," she said. "So, this link between animals that eat plant seeds and disperses them - that can maintain both populations." The Oregon State study concludes that if bears are removed, the seeds they move would simply fall to the ground. A decline in bear density, even if only brown bears, likely leads to a reduction in seed dispersal with consequences for plants.