The documentary showcases Shah's powerful performances and remarkably mature, spiritual perspectives on his life and condition. 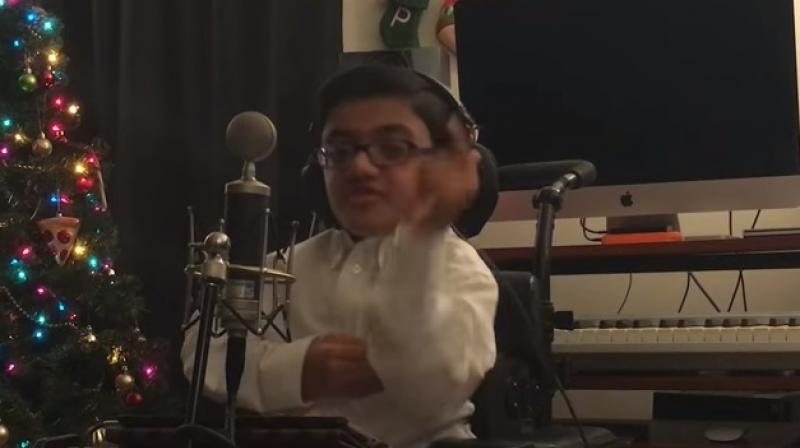 It will revolve around Shahs journey to the Champions of Hope awards ceremony in Los Angeles, where he is honoured and hopes to perform his latest song (Photo: YouTube)

Indian-American teen inspiration, Sparsh Shah of Iselin, New Jersey, will soon be seen in a documentary "Brittle Bone Rapper" set to release on YouTube on March 1. Sparsh, 14, has severe osteogenesis imperfecta, which is characterised by fragile bones that break easily.

Despite having fractured bones over 130 times in his life, the resilient teen says "nothing can break his spirit - or stop him from singing." Osteogenesis imperfecta is a congenial bone disorder in which the person has low levels of type I collagen. There is no specific treatment or cure for the condition and treatment is directed towards preventing or controlling the symptoms, maximising independent mobility, and developing optimal bone mass and muscle strength.

The documentary, which will go live on the Real Stories YouTube channel, showcases Shah's powerful performances and remarkably mature, spiritual perspectives on his life and condition. It will revolve around Shahs journey to the Champions of Hope awards ceremony in Los Angeles, where he is honoured and hopes to perform his latest song, a duet with YouTube star Meredith Grace Puckett.

However, before he makes it to Los Angeles, he will be seen undergoing a critical surgery to straighten his spine which would ultimately save his life. Shah, who was featured at a recent IACCGH gala here, has written at least 10 original songs and several short stories, poems and speeches, along with performing at community events in the New York/New Jersey area.

The teenager gained international fame in 2016 after he uploaded a cover of rapper Eminem's "Not Afraid" on his YouTube channel with 7,00,000 views. "I've gone through my share of rough spots in life, but I don't let it get to me. I want to show people that no matter what happens in your life, you should never ever give up on your passion, and mine is singing and creating music! Sparsh told the audience at the gala.