Interestingly, the exhibition showcases various issues related to the environment, human behaviour towards life and the forest. 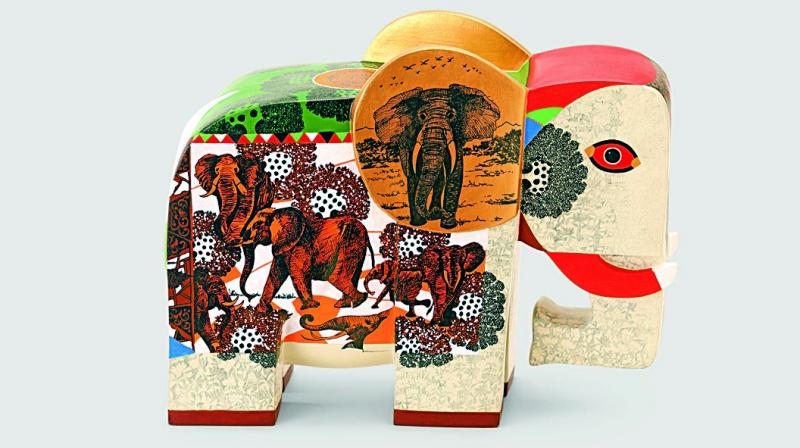 A preview of a charity art show on January 16–18, showcasing artworks of twenty five artists on fibreglass 3D models has become the talk of the town in Hyderabad.

Visuals of the mighty elephant strolling around in the wild is a rather common yet enchanting image across the country for ages. Now, 25 artists from the city have come together to paint brightly coloured images the mighty elephants on fibreglass 3D models for a charity art show, called Gaja. Gaja aims to not only show empathy towards animals but also blur the conventional approach towards art. For instance, the minimalistic yet concrete work of visual allegory gives a fitting ode to the might warrior.

Elaborating on the concept of the show, the curator and artist Bolgum Nagesh Goud says, “This charity art show is my dream project, which I’ve been planning for two years. I’ve painted elephants through Art Alive Gallery New Delhi while working closely with Maneka Gandhi for the Elephant Sanctuary in Mathura. This prompted me to design and conceptualise a show of painted elephants.”

Mighty tuskers on fibreglass
Nagesh goes on to talk about how the show not only enabled him to give back to society but also allowed him to work with his favourite artists from the city. Then about a year ago, he recollects, everything finally fell in place. “I gave the fibreglass models of the elephant to the artists, who then took it upon themselves to create their masterpieces,” he says. While 18 out of the 25 artworks have already been pre-sold, a VIP preview for the public is set to happen from January 16–18. The show will also be held in the State Art Gallery from January 24–27, with a part of the proceedings from the artwork sale going towards the welfare of Sita, the youngest elephant in the Nehru Zoological Park in Hyderabad.

Interestingly, the exhibition showcases various issues related to the environment, human behaviour towards life and the forest. “A few artists have tried to symbolise Gaja, or elephant, as a royal animal and in warfare, while some others have represented it as a symbol of religion. However, other artists distance themselves from these narratives by incorporating formalistic aesthetics, exploiting nuances from the modernity and the nature, while negotiating with indigenous forms and hybrid visual vocabulary,” Nagesh points out.

Artwork reminiscences
In her artwork, Gouri Vemula, a participating artist, decorated the model with a stencil made of copper sheet, using golden yellow to capture the richness with a composition like that of the zodiac sign Gemini.

Additionally at the show, while senior artist Laxman Aelay’s work highlights local myths, A. Rajeshwar Rao’s thought-provoking installation dealt with the degeneration of the ecosystem and the vulnerability of animals that are affected by the plastic waste.

Another interesting work at the show is by artist Bholla Sreekanth Kurva, who’s created a visual delight using traditional textiles such as brocades. “I’ve always been intrigued by textiles. So, as this opportunity came my way, I thought I should give the elephant the most regal look,” explains Sreekanth.

Chinthala Jagadish, who was thrilled with the idea, has previously done many animal sculptures such as those of lions, tigers and bull. But he made a different connection while painting on the 3D elephant model, which he eventually named as ‘Ganapathi’.