Dhanya Sanal, who created history by becoming the first woman to trek Agasthyarkoodam, talks about the experience. 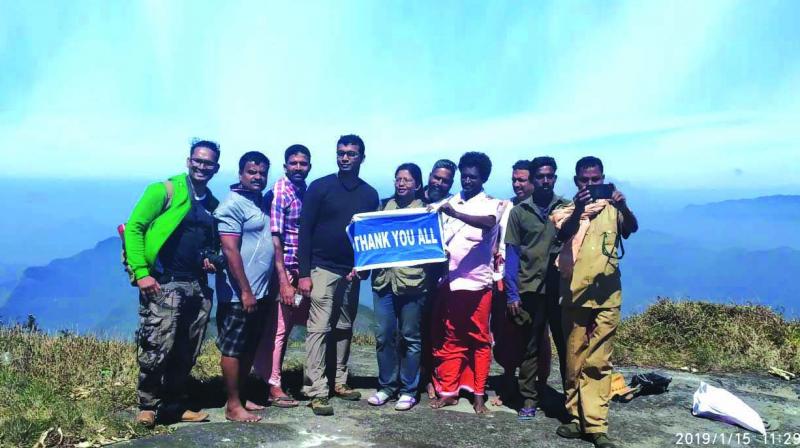 A total of 4,700 people had registered for the trek this year, of which 100 were women.

For Kerala, January has become the month of new beginnings. Earlier this month, two women – Bindu Ammini and Kanaka Durga – made history by entering the Sabarimala temple, following months of protests against the entry of women in the hill shrine. Later, another traditional male bastion was scaled by 38-year-old Dhanya Sanal, who is the Defence spokesperson in Thiruvananthapuram. Dhanya became the first woman to scale the 1,868-metre-tall Agasthyarkoodam – the second highest peak of Kerala – which is traditionally open only to men, after the Kerala High Court lifted gender-based restrictions. A total of 4,700 people had registered for the trek this year, of which 100 were women.

We caught up with Dhanya after her ‘tall’ achievement and enquired about the euphoria after conquering the summit. She quips, “It was like a hardcore Mohanlal fan watching the mega star’s movie first day, first show!” On a serious note, she adds, “It was only when I climbed down that, I became aware of the hype surrounding my trek, though it was just a normal one for me. I am an active trekker, who has traversed through difficult terrains in different parts of the state. It is just that I got a window of opportunity to trek to Agasthyarkoodam and I grabbed it with both hands. If it was not for the restrictions imposed, I would have trekked to the summit even earlier.”

Dhanya makes it look easy, but the trek was certainly not a waltz in the park. It tested her levels of physical endurance to the extreme – something she was completely expecting and prepared for. She was accompanied by two female forest guards. Dhanya started off her trek from Bonacaud, the base station of Agasthyarkoodam, to the base camp Athirumala which was 13.5 km away. “It is from here that we can climb to all the other peaks,” she informs. The initial thick forest cover then turns to semi-evergreen and finally grasslands. This trek, though tough for a novice, was relatively easy for Dhanya because of her trekking experience. She mentions, “There are steep inclines of almost 60-70 degrees as I trekked upwards.”

She specifically talks about Muttuidichaan para whose very name gives a clue. “There, our knees tend to hit our chest because we need to bend so much,” she explains.  Incidentally, Dhanya was also carrying a 10-kg bag which had her sleeping bag, nuts, chocolates, dates, first aid and other essentials.

The final destination of day one was the Athirumala base camp, where she spent the night. She recalls, “It was very cold and more than that, it was extremely windy and a sleeping bag was essential.” The next day was when she started her trek to the summit. There was an immediate change in topography. “Grasslands and earth turned to basalt rock and forests. The second day was very challenging because the terrain is very rugged with steep basalt rocks – almost 40 metres high. There are ropes in sequence which are to be used to climb to the top and once that feat is achieved, one reaches the summit to the sight of cloud-hidden majestic peaks all around,” she states. She also got to meet some fellow trekkers there and was greeted by claps by those present there. “I was actually in shock,” she shares. Those were moments of happiness. “I remember hearing the forest beat officer officially sending out a message to the base camp that ‘she has reached the top.’ Also imagine standing on ancient, sacred ground – I felt very humbled!”

Dhanya started the day’s trek at 7.30 am and reached the summit by 11.10 am. She then began her descent.

What Dhanya reiterates throughout the conversation is that only experienced trekkers are best advised to attempt this trek. “Otherwise, I will not recommend it for any man or woman because for one, it is very exhausting and secondly, even if you get injured, it would be impossible to reach you and get you down through the dense forest. Remember, you have to walk 40 km with a 10-kg bag through rugged terrain,” she cautions.

Nature lover Dhanya considers this trek as the most difficult one in her life. She has trekked in the icy climes of Siachen as well as various other ranges in Kerala. A person who nurtures multiple hobbies that charge her, she discloses, “Now, most people are under the impression that trekking is my only hobby, but no. I have varied other interests and trekking is one amongst them,” she says.

Since the mountains are considered to be the holy abode of Saint Agastya and there is a temple at the hilltop, which has an idol of the celibate Agastya, women have traditionally not set foot there. Minor protests by the Kani tribe were seen at the base camp at Bonacaud, but that in no way impaired Dhanya’s trek. She speaks very fondly of them, “The tribespeople gave us food and water. They treated me well and even enquired about the trek. A guide from the Kani tribe accompanied me because they know the terrain very well.  Yes, there was a token protest, but it did not affect me.”

Before signing off, Dhanya says, “If you are determined to go there, make sure you trek beforehand and walk for long distances at least three months prior to the trek. Believe me, it is difficult!”