The words "Drama Bandh Karo" in the advertisement were changed to "Hamari Chinta Mat Karo". 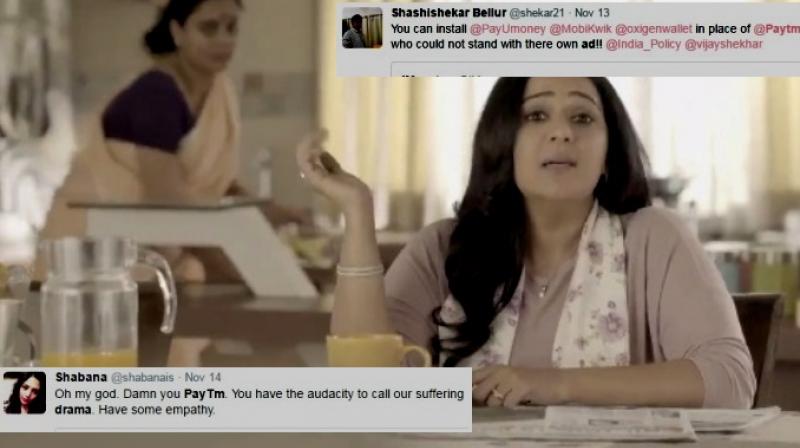 The ad showed a woman complaining about effects of demonetisation (Photo: Twitter)

New Delhi: The government’s move to demonetise currency notes of Rs 500 and Rs 1000 has been inviting mixed responses with some calling it a bold move for a greater good while the inconvenience and chaos caused by the lack of administration has triggered sharp criticism.

Among many reactions, e-payment giant Paytm first praised the move and was also accused by some of having prior information to benefit from the move, after it featured the PM in its ad related to the move the very next day.

It’s now facing flak for an advertisement in which it shows a woman talking about the inconvenience caused by the move and difficulty to pay her domestic help’s salary. The help responds saying “Drama Bandh Karo, Paytm Karo”.

The ad was slammed on the social media as people called it insensitive given how people were facing difficulties due to demonetisation.

I deleted @PayTm app too.

People are dying and @vijayshekhar is insulting people's pain, calling their plight Drama.

I can't support that. https://t.co/N5bVnufKPJ

Oh my god. Damn you PayTm. You have the audacity to call our suffering drama. Have some empathy. https://t.co/CcdRbjYC7x

With our strong belief in financial inclusion for every Indian, here is our upgraded ad. pic.twitter.com/DiUbNuERGK

But this move too didn’t go well with another section of trolls who branded the e-payment platform’s move as a cowardly one.

@Paytm drama word is apt since you removed that word to suit your political identity uninstalling your app. Drama math karo @Paytm

You can install @PayUmoney @MobiKwik @oxigenwallet in place of @Paytm, who could not stand with there own ad!! @India_Policy @vijayshekhar https://t.co/5ZTBacPuXB

So @vijayshekhar removed an ad because some AAPis threatened to uninstall @Paytm. OK, time for me to uninstall it. Also deleting paytm a/c. https://t.co/1SVnaqzbvL

It seems there’s no respite for Paytm which has caught itself in the middle of the ongoing turmoil.