Sapna Moti Bhavnani’s debut film is a story of people who travelled from Karachi to Mumbai in the 1947 exodus, told through tattoos on her legs. 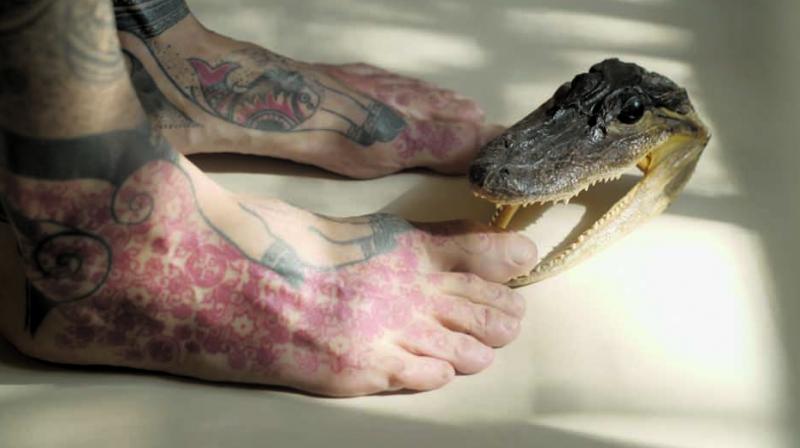 With legs entirely covered in tattoos, Bhavnani is yet to reveal the narratives inked in Ajrak and Madhubani art traditions.

Several years ago, Sapna Moti Bhavnani, the tour de force hairstylist, had accompanied her then-boyfriend to a concert of Susheela Raman, the British Indian singer. In the line-up, there was a group of Sindhi Sufi fakirs whose music had dazzled the audience, particularly Bhavnani, who found herself extremely moved by the performance. A strange reminder dawned, and all of a sudden Bhavnani was reminded of her roots.

“I was so blown away; I had never seen anything like that in my entire life. Listening to the music, I realised that this is where I am from; I am from Sindh,” remembers Bhavnani.

As soon as she returned home that night, from the nooks of the Internet she found a fascinating trivia–her all-time favourite singer, Abida Parveen, was Sindhi–and thereafter Bhavnani’s search for her home and her culture dwelled her deep into the discord set in by the seismic Partition, especially as a descendant of the refugees.

Her intensely personal yet public search for identity has reached a junction with her directorial debut documentary film called Sindhustan. The documentary that has already had its world premiere at New York International Film Festival earlier this year and has won six awards so far is a story of people who migrated from Karachi to Bombay during the 1947 exodus.

What really stands out in Bhavnani’s documentary is its unusual use of the medium. Unlike the traditional film, these forgotten narratives ultimately tear through the 2D screen to come alive as tattoos inked on Bhavnani’s legs. “The best way to tell the story is to become the story. I thought my legs were also a great metaphor because they symbolised the journey of the ones who witnessed Partition, and my feet were kind of symbolised the lack of roots that the first-generation of Partition refugees might have felt,” elaborates Bhavnani, whose film is making its Asian premiere at the 21st Jio MAMI with Star under the India Story category.

With legs entirely covered in tattoos, Bhavnani is yet to reveal the narratives inked in Ajrak and Madhubani art traditions. “I have been inked for two years but I have kept myself hidden in India because I didn’t want to give away my legs before my film. Now that the film is coming home in MAMI, I just want to wear a chaddi and walk in,” jokes the ecstatic filmmaker. Although giving a peek, she reveals that she has depictions of Sufi culture, a portrait of Sufi poet and saint, Shah Abdul Latif, the story of her ancestral city Shikarpur (now in Pakistan), and a story of a refugee’s travel in a ship, among other tattoos.

Bhavnani further elaborates that the impetus to tell the story about Sindh through tattoos was actually seeded in by her grandmother, years ago. “When I was living in America, and I had just started to get myself inked, I had come to India to meet my nani. And like a good Indian girl, I tried to cover myself but she could see it because how much can you really cover? She just had a smile on her face and called me old fashioned. And she had such a beautiful explanation that when we just came to the planet, human beings lived in tribes and these tribes had markings and piercings. And she told me that I am just going back to my roots,” she recalls. And so, the hairstylist decided to tell the story by getting inked and hopes that after her death her legs would be preserved by taxidermy to put in the museum.

At a time when cross-border dialogue has been riddled with diplomatic tension and spewed with hate, Bhavnani hopes that her film will open the doors to history and give people a chance to reconnect with their roots. It was in her attempts to achieve the latter that Bhavnani, in July had tweeted a request to Pakistan’s Prime Minister Imran Khan to grant her VISA to visit her homeland, Sindh. Although it invited notorious trolling, Bhavnani claims that from across the border, people had actually emphasised support for her wish to be granted. “Before I knew it, the tweet went viral in Sindh in Pakistan and #grantvisatosapnatovisitsindh was trending for three days. Imagine the love they had for someone from this side wanting to visit home,” says Bhavnani before adding, “The biggest problem is that most of the people are not in touch with each other, and so they believe in the false narrative that someone is just telling them. Ideally, one should make their own narrative and reach out to people and see that there is so much love among the people.”

Even though Bhavnani’s earnest request could not be met due to the developments in the Kashmir that lead to the severing of relations between the two countries, the filmmaker insists that her search for her identity will only culminate once she’ll get to visit the homeland of her ancestors. “My journey is important, and maybe that will be the second film I do, but my journey is not complete till I reach Sindh,” concludes the filmmaker, who inspired by the moniker given to her in Cannes Film Festival last year, has a title in mind – The Lady with the Legs.