Following alert from PETA India, health ministry warns that tuberculosis can be spread to humans, including tourists taking elephant rides. 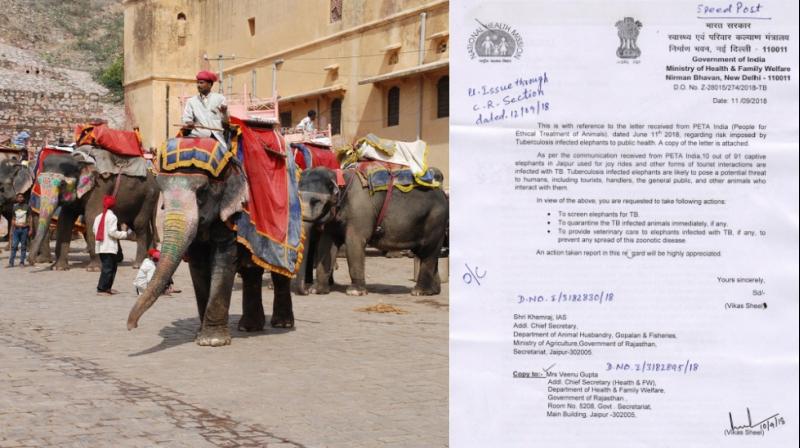 The animal rights group has also filed a petition with the Jaipur Bench of the Rajasthan High Court seeking to end all elephant rides at Amer Fort in light of apparent violations of load restrictions and other laws.

Delhi: People for the Ethical Treatment of Animals (PETA) India alerted the Ministry of Health and Family Welfare that 10 out of 91 elephants tested for tuberculosis (TB) in April were found to be reactive and that they were still being forced to give rides at Ajmer Fort.

The Ministry, following PETA’s outcry, responded by directing the Government of Rajasthan to screen all elephants again for TB to quarantine any who are found to be infected immediately, and to provide those suffering from the disease with veterinary care. These included the 11 who had never been screened and who may have passed the disease to others, including those who previously tested negative.

In addition to warning the state about the potential threat the disease — which can be fatal and is contagious to humans — poses, including to tourists taking elephant rides at Amer Fort and those who are in close proximity to elephants at Hathigaon, animal handlers, and others, the Ministry requested that the state provide it with an "action taken" report.

The move comes after an April 2018 evaluation report on captive elephants in Jaipur by the Animal Welfare Board of India — a statutory body operating under the Ministry of Environment, Forest and Climate Change — revealed that 10 per cent of the elephants used for rides and other tourist interactions in Jaipur were found to be reactive in a rapid immunochromatographic test for TB.

In June — following communications from PETA India — the Rajasthan Forest Department directed the Department of Archaeology and Museums, which is responsible for regulating elephant rides at Amer Fort, to ensure that all TB-infected elephants be quarantined and removed from public contact immediately. However, numerous elephants remain untested, continuing to put the general public at risk.

"As the Ministry of Health and Family Welfare says, the only way to protect the public from TB is to identify sick and potentially contagious elephants and stop them from giving rides and being in direct contact with humans and other elephants," says PETA India Associate Director of Policy Nikunj Sharma. "Instead, five months after numerous elephants giving rides at Amer Fort or kept at Hathigaon were found reactive for the disease, many others have yet to be tested, putting everyone who gets near them at risk."

PETA India notes that according to recent scientific studies, there's a high prevalence of TB infection in captive elephants, buffaloes, and cows in this country. It's also reported that approximately nine per cent of all TB transmission is from animals to humans – and the percentage is even higher among human children.

The animal rights group has also filed a petition with the Jaipur Bench of the Rajasthan High Court seeking to end all elephant rides at Amer Fort in light of apparent violations of load restrictions and other laws.