Achievers achieve in spite of problems not in absence of them: Author Shiv Khera

Khera’s new book You Can Achieve More says a person who harbours a positive outlook in life cannot be stopped. 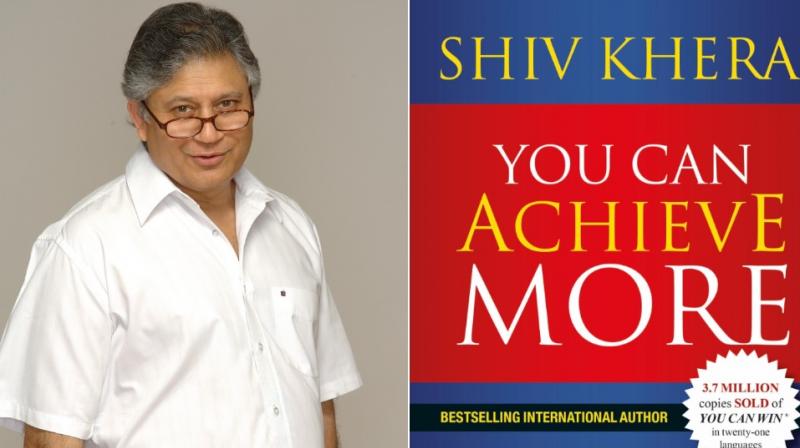 Khera points towards the title of the book ‘You Can Achieve More’ and says no matter what stage of life a person is in; they need to ask themselves if they have optimised their performance.

Internationally renowned motivational speaker and bestselling author of You Can Win, Shiv Khera recently launched his new book You Can Achieve More.

According to Khera, a person who harbours a positive outlook in life cannot be stopped and a negative attitude only hinders progress in the life of a person.

Khera says that success and failure, both have a limited lifespan and the ultimate goal is to sustain success and eliminate failure.

In conversation with this correspondent, Khera points towards the title of the book ‘You Can Achieve More’ and says no matter what stage of life a person is in; they need to ask themselves if they have optimised their performance.

Here are excerpts from interview:

What is the book all about?

Then the subtitle says, ‘Live by Design, not by Default!’ Living by design means we are doing things out of choice which gives us gratification, happiness and we live a meaning life. Living by default on the other hand, means, the question of living with guilt, resentment or remorse. We all have these three elements sometimes in our lives. But if it prolongs then obviously we are living totally by default.

Achievers achieve in spite of problems not in absence of them. A prime example of this is the great martial art legend Bruce Lee. He had one leg shorter by one inch than the other. He was near sighted. His eyesight was minus 10. He could not see his opponent without lenses. He practiced 5,000 punches per day for years together. He said something very profound. He said, I am not afraid of someone who knows 10,000 ways how to kick. I am afraid of the person who knows only one way of kick but has practiced that one kick 10,000 times. In conclusion, it means, to change reality, we need to change mentality.

You Can Achieve More is easy to read, practical to implement, addressing day to day issues which people can relate to. It touches both the head and the heart together which is what drives the reader to act on what’s written in the book.

Your book talks about positive action. Why is it important?

What led you to write the book?

Every book acts as a seed for the next book by germinating new ideas.  After writing ‘You Can Win’ which has sold close to four million copies, this book, in a way, is an extension of ‘You Can Win’ and in fact, after completing this book ‘You Can Achieve More’, so many other thoughts and ideas that came into my mind that I wanted to put into this book which I couldn’t. So literally that has created the manuscript of the next book. The attitude, leadership, motivation, values are so vast that writing several books on these certainly takes time but many books can be written on these topics without repetition.

Five tips for readers to be successful.

Read this book with a pen/pencil in hand and keep marking the points that you would like to implement. Don’t lend or borrow your books at all. Because once you mark them, then, at a later time, you want to refer to only the marked portion.

Identify one idea every day from the book that you want to internalize.

Identify one negative behavior that you would like to eliminate every day.

Make integrity a way of life. Take pride in performance.

Isn't achievement in the modern world something extremely material? Does it really make a person happy at the end of the day?

In today’s modern world, success is measured by material things in life. That is true. But at the end of the day, if you ask people, ‘what are you doing?’ ‘What are you chasing?’ ‘What is your ultimate objective in life?’ Universally you’ll get the same answer, “I want to be happy.’

The ultimate goal of success is to achieve happiness.

After much introspection, I’ve come to the conclusion that in order to be happy, we need three things—Health, wealth and good relationships.

Health: People who lack good health cannot be happy. Supposing, you have all the wealth in the world and great relationships too, but don’t have good health, can you be happy?

Wealth: By wealth, here, I mean financial wealth. There are people who believe and make others believe that financial wealth is not important in this world. Of course, it is not the most important of factors, but it is important enough for a peaceful sustenance.

Good Relationships: Without good relationships, people feel a void in their lives, which can lead to either insecurity or loneliness. I have never seen a person who has nasty relationships being truly happy

I am already working on my next two books. One is on the similar line of You Can Win and You Can Achieve More. The other one is on relationships.