Syringes left by drug users amid the heroin crisis are turning up in open spaces across the US. 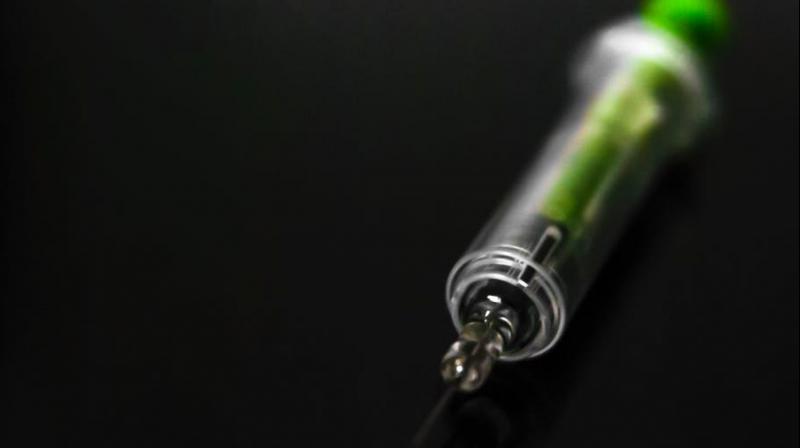 Lowell: They hide in weeds along hiking trails and in playground grass. They wash into rivers and float downstream to land on beaches. They pepper baseball dugouts, sidewalks and streets. Syringes left by drug users amid the heroin crisis are turning up everywhere.

In Portland, Maine, officials have collected more than 700 needles so far in 2017, putting them on track to handily exceed the nearly 900 gathered in all of 2016. In March alone, San Francisco collected more than 13,000 syringes, compared with only about 2,900 the same month in 2016.

People, often children, risk getting stuck by discarded needles, raising the prospect they could contract blood-borne diseases such as hepatitis or HIV or be exposed to remnants of heroin or other drugs.

It's unclear whether anyone has gotten sick, but the reports of children finding the needles can be sickening in their own right. One 6-year-old girl in California mistook a discarded syringe for a thermometer and put it in her mouth; she was unharmed.

"I just want more awareness that this is happening," said Nancy Holmes, whose 11-year-old daughter stepped on a needle in Santa Cruz, California, while swimming. "You would hear stories about finding needles at the beach or being poked at the beach. But you think that it wouldn't happen to you. Sure enough."

They are a growing problem in New Hampshire and Massachusetts — two states that have seen many overdose deaths in recent years. "We would certainly characterize this as a health hazard," said Tim Soucy, health director in Manchester, New Hampshire's largest city, which collected 570 needles in 2016, the first year it began tracking the problem. It has found 247 needles so far this year.

Needles turn up in places like parks, baseball diamonds, trails and beaches — isolated spots where drug users can gather and attract little attention, and often the same spots used by the public for recreation. The needles are tossed out of carelessness or the fear of being prosecuted for possessing them.

One child was poked by a needle left on the grounds of a Utah elementary school. Another youngster stepped on one while playing on a beach in New Hampshire. Even if adults or children don't get sick, they still must endure an unsettling battery of tests to make sure they didn't catch anything. The girl who put a syringe in her mouth was not poked but had to be tested for hepatitis B and C, her mother said.

Some community advocates are trying to sweep up the pollution. Rocky Morrison leads a cleanup effort along the Merrimack River, which winds through the old milling city of Lowell, and has recovered hundreds of needles in abandoned homeless camps that dot the banks, as well as in piles of debris that collect in floating booms he recently started setting.

He has a collection of several hundred needles in a fishbowl, a prop he uses to illustrate that the problem is real and that towns must do more to combat it. "We started seeing it last year here and there. But now, it's just raining needles everywhere we go," said Morrison, a burly, tattooed construction worker whose Clean River Project has six boats working parts of the 188-kilometer river.

Among the oldest tracking programs is in Santa Cruz, California, where the community group Take Back Santa Cruz has reported finding more than 14,500 needles in the county over the past 4 1/2 years. It says it has gotten reports of 12 people getting stuck, half of them children. "It's become pretty commonplace to find them. We call it a rite of passage for a child to find their first needle," said Gabrielle Korte, a member of the group's needle team. "It's very depressing. It's infuriating. It's just gross."

Some experts say the problem will ease only when more users get treatment and more funding is directed to treatment programs. Others are counting on needle exchange programs, now present in more than 30 states, or the creation of safe spaces to shoot up — already introduced in Canada and proposed by U.S. state and city officials from New York to Seattle.

Studies have found that needle exchange programs can reduce pollution, said Don Des Jarlais, a researcher at the Icahn School of Medicine at Mount Sinai hospital in New York. But Morrison and Korte complain poor supervision at needle exchanges will simply put more syringes in the hands of people who may not dispose of them properly.

After complaints of discarded needles, Santa Cruz County took over its exchange from a nonprofit in 2013 and implemented changes. It did away with mobile exchanges and stopped allowing drug users to get needles without turning in an equal number of used ones, said Jason Hoppin, a spokesman for the Santa Cruz County.

Along the Merrimack, nearly three dozen riverfront towns are debating how to stem the flow of needles. Two regional planning commissions are drafting a request for proposals for a cleanup plan. They hope to have it ready by the end of July. "We are all trying to get a grip on the problem," said Haverhill Mayor James Fiorentini. "The stuff comes from somewhere. If we can work together to stop it at the source, I am all for it."