The list of failed ventures is always longer. It’s easy to lose one’s passion under pressure. 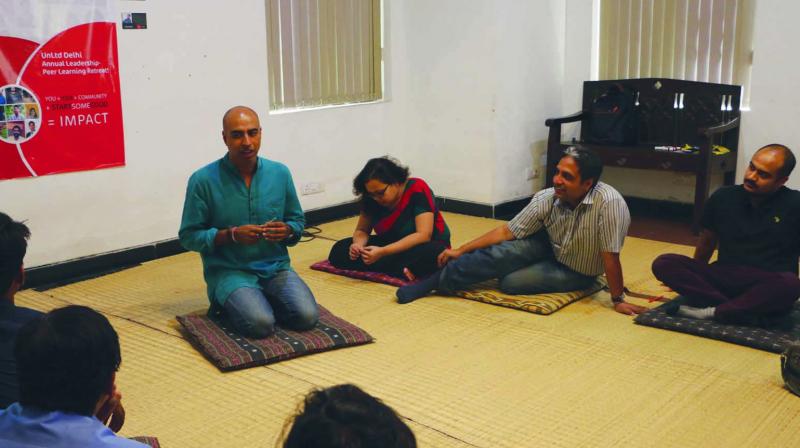 Selection depends upon factors like motivation, capability of having a social impact, one’s reaction under pressure and the potential.

Starting something new by oneself can prove very challenging. Everyone needs to be mentored and a helping hand can be hugely beneficial. Many people start new ventures with a lot of enthusiasm but few of them are able to sail across the rough sea. The list of failed ventures is always longer. It’s easy to lose one’s passion under pressure. It is at those times that people could use a helping hand and expertise from those who have been there and done that. To help such budding social entrepreneurs, a city-based NGO, Unltd Delhi by Rahul Nainwal, is acting as an incubator and pushing them towards self-sustenance.

“About fifteen years ago, I started with iVolunteer, at the same time I started another non-profit called India Fellow. I realised that people helped me a lot by giving me time and money. They also mentored me. They probably saw potential in me. This inspired me to start something which could help other budding social entrepreneurs,” says Rahul.

He explains that Unltd Delhi is just his way of reciprocating and returning the support he got while starting his own venture. Unltd Delhi helps potential social entrepreneurs with “a little bit of money, making their goal clear to them and mentoring them towards reaching that goal,” he explains.

The NGO identifies early stage social entrepreneurs who have a vision for their venture and have made prototypes for the same. After being identified, these entrepreneurs receive a grant from the NGO to kick-start their venture along with one-to-one mentoring and training for a whole year, making it an incubator for budding social entrepreneurs. “Our selection criteria comprises a couple of things. Selection depends on factors like motivation behind the idea, capability of having a social impact, the entrepreneur’s reaction under pressure and the potential of the ideas. We select them if we feel we can actually add value to them,” he adds.

The organisation is currently helping entrepreneurs whose social goals are concerned with introducing people to the concept of urban farming, low-cost food productions, life skill coaching, poetry as a medium to promote leadership, helping farmers sell their products for better income and all of this is just the tip of the iceberg.

So far the organisation has helped around 50 entrepreneurs. “Our goal is to help 300 budding social entrepreneurs in the next 4 to 5 years. In order to get there, we need to raise more money and reach out to more people,” says Rahul. The organisation is self-funded and mostly raises its money from personal investments from the founder or his friends who are interested in the venture.

“I think there is a social entrepreneur in each of us. There are so many social problems around us and we all can work towards solving these problems. Sometimes people need a nudge. If they think that they really want to start a social venture to help society, they can get in touch with us. At the end of the day, helping society is what matters most,” concludes the 43-year-old entrepreneur, who hopes to help as many social entrepreneurs as he can in the future.