A novel Japanese technique has been captivating the interest of gardening enthusiasts in mumbai and other space-deprived cities. 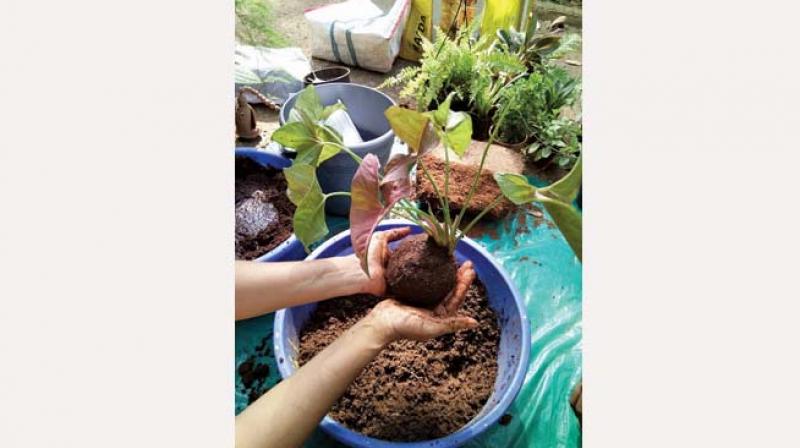 Gardening enthusiast and crafter, Pooja Vora remembers discovering ‘Kokedama’, a Japanese plant-growing technique, a couple of years ago. Apart from the name, it was the technique that fascinated her the most. “Kokedama makes use of moss balls rather than pots to grow plants. Also, Kokedamas (plants grown using this technique) could be suspended anywhere and I found this intriguing,” says the 31-year-old. Pooja spent the next five years learning the technique through e-books, YouTube videos and online articles and a couple of months ago, started conducting workshops in Pune to decode the process for others. The same is true for Delhi-based Shilpa Chauhan, a creative gardening enthusiast, who self-taught herself about Kokedamas because it was a “100 per cent green way of cultivating plants,” and now, conducts Kokedama workshops in multiple cities.

“The response has been really good because there are a lot of people who love gardening, but do not have the space to do so in their urban dwellings,” reasons Pooja. And lack of space is a problem that city dwellers have been combating for ages. Those with a green thumb are always on the lookout for ways to convert their concretised, arid vicinities into verdant patches, even if that means setting up a small, but thriving terrace garden or lining a windowsill with succulents or terrariums. Now, a novel gardening technique — Kokedama – is captivating the interest of urban gardening enthusiasts, as these low-maintenance, indoor Kokedamas require very little space to grow, making them a perfect fit for space-deprived urban interiors. 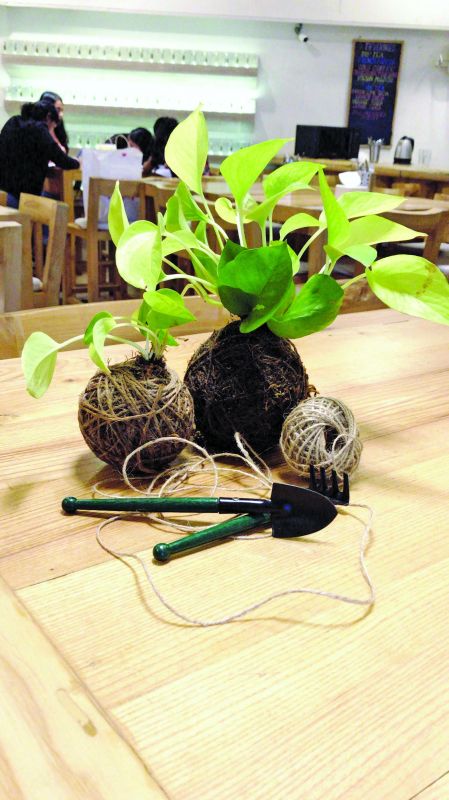 Wrapping a jute string around the ball

From Japan, for India
Kokedama is said to have originated in the Edo period in Japan, at a time when the Nerai Bonsai method was popular in the country. However, Mumbai-based Nisergini Pednekar, who conducts Kokedama workshops in the city, says that it was a man of small means who birthed the technique. “The bonsai method is expensive, and so a man, who couldn’t afford to make bonsai trees, invented the Kokedama technique. Hence Kokedama is called ‘poor man’s bonsai’ in Japan,” she says. The word Kokedama translates to ‘moss ball’ and Mumbai-based horticultural botanist Harshad Ainapure, who also conducts workshops, tells us more about this curious offering.

“In Kokedama, a plant is grown in a ball of soil, instead of in a pot, or in the ground. That ball of soil is covered with moss. A string is then wrapped around the moss-covered ball, which makes it possible to hang the Kokedama plant.” Kokedamas can be hung anywhere indoors, and therefore, add to the décor of interior spaces. Several can be hung together to create a beautiful ‘string garden’. While internationally, live moss is used to coat the soil ball, in India, Kokedama enthusiasts use dried sphagnum moss or peat moss for the same. “Living moss can be used during the monsoons, but it does not survive well year-round in Indian conditions,” explains Harshad. 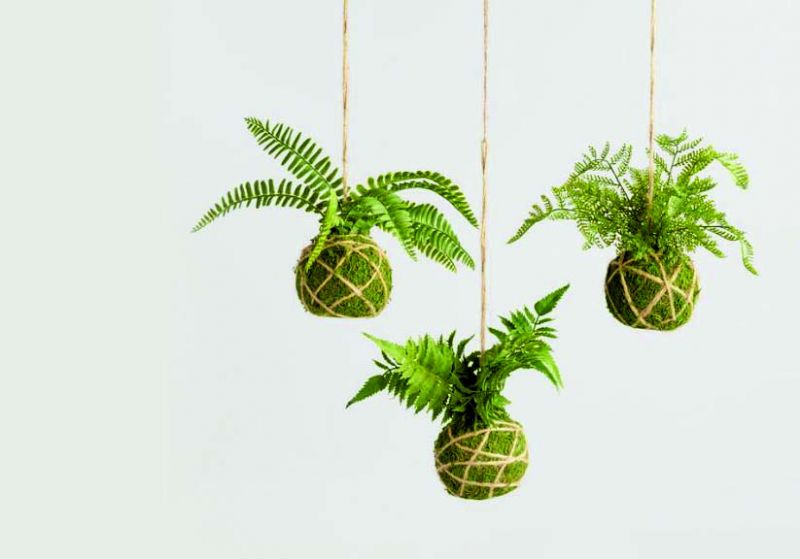 Apart from the right kind of moss, there’s also the question of using the right kind of soil.  Shilpa, who learnt through trial and error from YouTube videos, says that getting the right kind of soil mix was difficult initially because it’s a Japanese concept. “They use Akadama, which is a mix of clay and soil. So I had to figure out what in India would be a close substitute and in what proportions, because it also has to be sticky enough to stay in the shape of a ball,” shares Shilpa. And it is these learnings that Kokedama enthusiasts pass on to eager learners in their workshops, simplifying the process of learning for them.

Low maintenance, high benefits
Today, thanks to those who learnt by the trial and error method, it’s quite easy for gardening enthusiasts to grow Kokedamas in their homes. Harshad’s organisation, Nature First, provides first-time learners with soil, moss and saplings to plant, as does Nisergini’s Design Mela. The growing numbers of such organisations are allowing people to buy ready-to-use Kokedama components and Kokedamas or one could learn the process from scratch by attending workshops.

Apart from the procuring and making process, Kokedamas are also easy to maintain, because they do not require daily watering, nor do they require a lot of sunlight. Nisergini says that a Kokedama needs a 10-minute soak in a bucket of water every fortnight, or depending on the weather, while Harshad says that in addition to this, one can spray or mist the plant once a day (the interval between days can be increased during the rainy season or in winter.) Bangalore-based Kranti Kondeti, who runs the group Kokedama India, suggests adding fertilisers to the water when soaking the plant to extend the plant’s life. 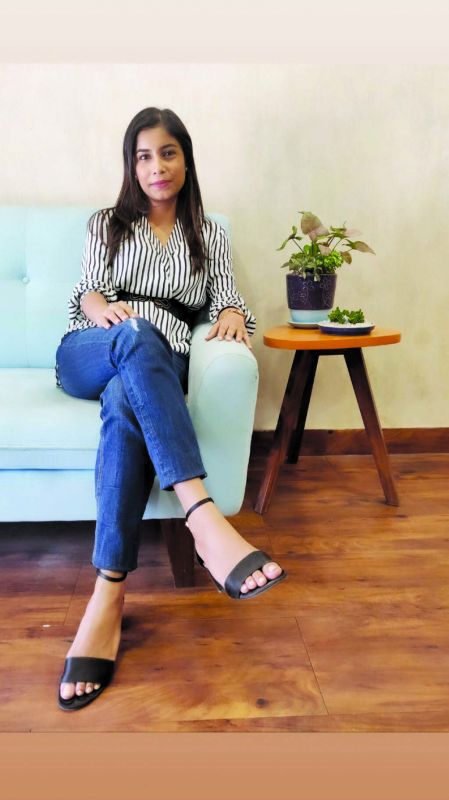 Since Kokedamas are ideal for indoor settings and can be suspended in any room, including the kitchen and bathroom, Harshad says that ornamental ‘air-purifying’ plants make the best Kokedamas. “Kokedamas definitely help purify the air indoors. Additionally, you can experiment with herbs and other edible plants. Many of these plants are resilient, so they live a long time. Overall, our humid climate is suitable for Kokedamas,” says Harshad. Kokedamas can be trimmed to maintain the plant’s height, alternatively, the whole Kokedama can be re-planted in a larger expanse of soil if you wish to nurture the plant into a tree. Nisergini mentions how the soil you work with while making Kokedama is good for your skin and adds that the whole process makes one feel closer to nature.

The gardening enthusiast also says that many nature lovers are opting to give Kokedamas as gifts rather than bouquets, while Harshad talks about how Kokedamas are a great way of attracting the attention of those who aren’t very keen on gardening or preserving nature. “Kokedamas have aesthetic value. They look much more exotic than regular potted plants. So they attract even those who are not very interested in gardening and create interest in greenery. Kokedamas can be used to create an interest in pursuing gardening as a very serious hobby in an urban setting,” he concludes.