The all-women team of INSV Tarini, who circumnavigated the globe, talk about their successful voyage and challenges they conquered bravely. 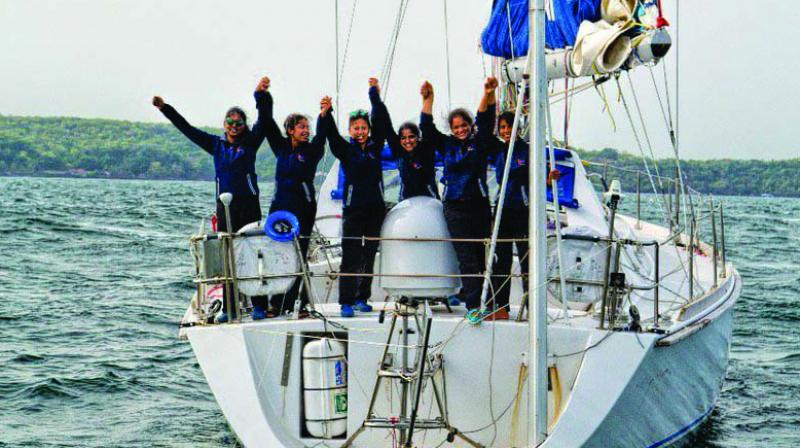 Last year, when six women officers from the Indian Navy left to circumnavigate the globe on INSV Tarini, little did they know that the journey would help them charter a new course in the Indian Naval history. Not only the country is proud to have these prolific women in the naval defence force, but even the world has now recognised their strength  after a documentary Tarini by National Geographic in collaboration with Indian Navy was released on March 8. The voyage that lasted for 254 days was led by skipper Lieutenant Commander Vartika Joshi, and the crew comprising of Lt. Cdr. Pratibha Jamwal, Lt. Cdr. Swati P, Lt.  Aishwarya Boddapati, Lt. S Vijaya Devi and Lt. Payal Gupta. It covered 21600 miles marking this Navika Sagar Parikrama as the first-ever Indian circumnavigation of the globe by an all-women crew.

In the exotic state of Goa, in a place away from the civilians’ daily life, is the INS Mandovi – Indian Naval Base, where currently, these six-women officers are posted. Working as a team on the boat during the mission to now looking after their respective cadres, these girls came together once again for a conversation and shared their experiences and individual takeaways from the voyage.

From baking cakes, celebrating birthdays, to seeing rare species of marine life, the girls lived through some adventurous times on the boat. But, it wasn’t a cakewalk for any of them. Lt. Cdr. Pratibha recalls the time when none of them were able to stand upright on the boat as they didn’t come from a sailing background. “Getting onto the boat was itself a challenge. From standing straight on the boat to actually sailing was like a baby learning each and everything,” recalls Pratibha, who also adds that  the team underwent three years of rigorous training by Captain Dilip Donde for a year and thereafter Captain Atool Sinha, an Asian Games silver medallist and Officer-in-Charge of Ocean Sailing Node took over the charge for next two years. As a trainer, Sinha ensured that all administrative, logistics and technical aspects were completed under his guidance and the boat was well prepared to undertake the historic circumnavigation voyage.

Facing the rough seas, scorching sun, biting cold and freezing winds with unrelenting spirit, these women had two things in common – the focus on their goal and the zeal to explore the ocean. “It’s like doing things which you can’t do otherwise. This mission was a chance to explore the ocean and that’s what made all of us successfully complete the mission,” says Payal. For the skipper Vartika, it was more of giving back to the nation for the trust they had on the team, as she explains, “Initially, it was difficult but we knew that Navy has faith on us and the government has supported us. There is an entire nation watching and backing us so that provided motivation, and we knew that this mission will have a huge impact on the people.”

From navigation, communication, weather prediction to repairing things and dealing with emergencies when the weather got rough, these women learnt everything on the job. And it was their training that helped them conquer several moments of crisis. In the South Pacific, the team encountered a storm where the sea waves were almost nine to ten meters high and the winds were picking up to 60-70 knots which Vartika equates to the force of a hurricane on land. “There were many small challenges but these made us unite and conquer it as a team,” recalls the skipper proudly.

While other girls remember the voyage and their time on the boat, Aishwarya cherishes the time she spent with the team during her training days. She clearly remembers the days when the girls would complete the tough training and tasks and head straight to a milk shop outside the naval premises every day. “It was like a heavenly closure to the tiring day, and the milkshake would be a refreshing tonic,” she smiles and adds that the entire mission has opened up an arena for a lot of women and youngsters who now know that ocean sailing is something they can take up.

When asked about their individual takeaways from the entire expedition, the girls differ in their learnings and future ambitions. While Aishwarya learnt to battle her fears, Payal is more patient now in dealing with certain situations. Pratibha proudly feels more responsible after her journey on the sea and Vartika has learnt to be receptive to opinions. “Being a skipper, I have to respect different opinions and come up with the best solution, because when six different minds are there, the difference of opinions are bound to happen,” insists the skipper.

The entire voyage was the idea of a retired navy officer Admiral Manohar Prahlad Awati, who died last November and had described the six women officers as the ‘serendipitous six’ in the documentary. Yet, these officers are shying away to take this mission as a victory for they have a bigger ambition of motivating the women of the nation to join Indian Navy. “We have still not reached the phase where we could call it a victory. The real triumph will be when the people from the interiors of the nation will have access to this information and when they would make a move forward to join Indian Navy. That day we will celebrate our victory,” expresses Vartika.