Awestruck on The finnish line!

Finland is fantastic. Yet, beyond the ethereal Northern Lights is a land that has so much more to explore and experience. 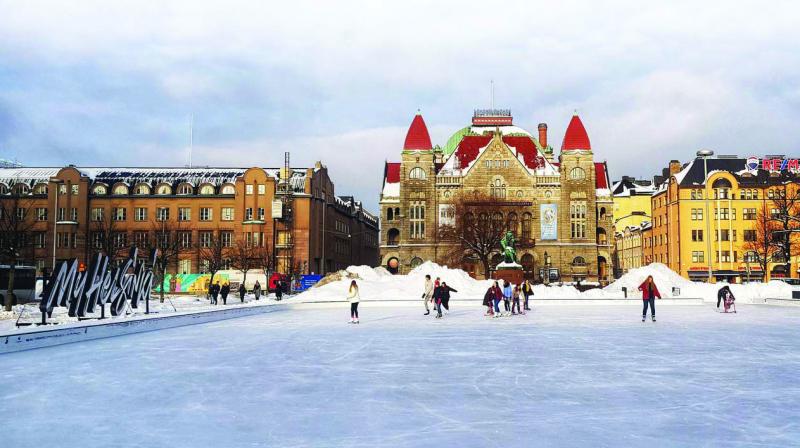 The skating rink outside the main Helsinki Central Station

Try and picture this... It’s -27°C (that feels like -35°C). It’s all fogged up from everyone’s breath, and the smoke from hot glogg and berry juice. Huddled around the flickering firelight is an enchanting Finnish maiden who mesmerises all with folklore and myths about the Northern Lights. The stories that range from schools of herring fish reflecting light, to spumes of water ejected from whales, to blood of the murdered, to souls of the dead, to estranged lovers communicating across time and space, to the most favourite folklore of all — It was believed that the lights were caused by the firefox who ran so quickly across the snow that his tail caused sparks to fly into the night sky creating the Aurora Borealis. Indeed, the Finnish word for the Northern Lights “revontulet” translates literally as “fire fox!”

If I was asked to rate what was my most magical memory of travelling to the Northern Lights for a gig (and there were many), this would probably be it.

Carlton with a friend indulge in snowmobile racing on the Kemijoki

The unfortunate thing is that when a trip is labelled as ‘Chase the Northern Lights with Carlton Braganza’ curated by backpacker.co, the only question asked, and justifiably so, on getting back is ‘How were the lights? It’s on my bucketlist!’ I’m choosing to ignore that question and try and make a point that the lights were (blasphemy of blasphemies) incidental!

What does one do other than chase the lights? Well, there’s a whole lot you can do here and we’ll start with the most obvious. We drank copious quantities of valhala, mintu and vodka. Legend has it that the more valhala you drink the more lights you will see. 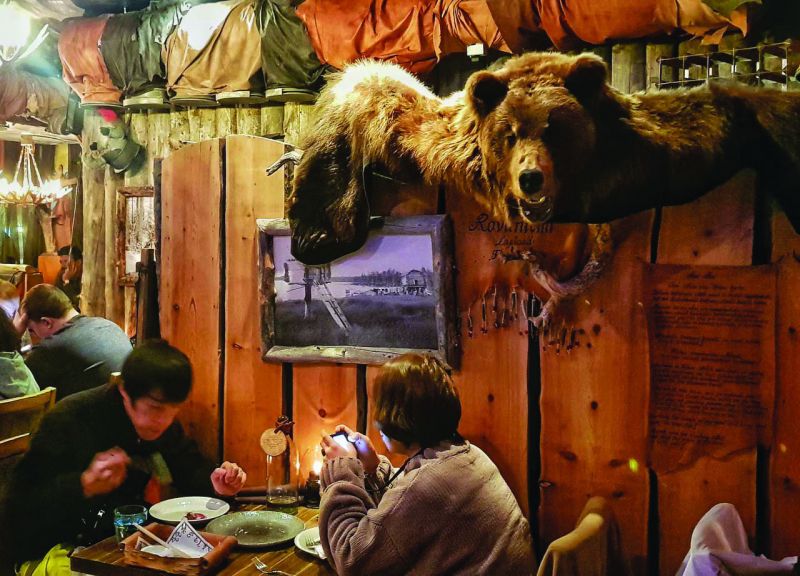 We also visited a husky farm, and rode a super spirited eight husky dogsled! The dogs have a great life, defined working hours and even a retirement plan! It made me mull about acche din being synonymous to a dog’s life!

I also did a fun gig at Oliver’s, the very popular local watering hole, on Republic Day, and it saw people waving the Indian tricolour in Finland! The city of Rovaniemi is a student town and one can pub hop, and party all night long and the girls far outnumber the guys! Some places might have long queues to enter which is not so much fun at 3 am when its -20°C outside!

This town is known as Santa’s hometown. So we had to pay Santa a visit. Yes the actual Santa. At his official address. We were told that over 19 million letters have been received from 199 countries for Santa Claus to answer. We also chomped on his favourite meal of grilled salmon (easily the highpoint of that visit and worth the 40 minutes wait!). Happy, a bit overwhelmed, we crossed the Arctic Circle, and paid 45 Euros for a photograph with the silver bearded fellow! Clearly taking advantage of one’s position comes with the white bearded man territory!

We also rode a snowmobile on a frozen river. And our fears were alleviated by many locals confirming that it was a safe endeavour. We later found out that, this remains true if you stay on the charted path and don’t slow down if you see slushy patches! And if you think -25° is an inhuman condition, you should try it at 80 kmph!

My favourite among favourites was my stay at the Arctic Snow Hotel. All my class 5 geography cramming of eskimos, tundra and igloos came hurtling back. The entire hotel, rooms, chapel (people get married here), bar, beds (and ambitiously spend their wedding night here), tables, chairs  and even drinking glasses are made of ice. It makes you feel like you are the king of the north! And a very frozen one at that!

We had been told about the Finnish sauna (they’re the ones that invented this wonderful and rejuvenating experience). It is supposed to be meditative and reflective, thought it wasn’t the same for us as we uncouthly violated all rules quite enthusiastically. It was quite an intense experience, nonetheless! About 10 – 15 minutes of sweating profusely, all dependant on how much water you put on those hot stones. Then you run out from +80°C into – 20°C and roll around in the snow or jump into a frozen lake, and from there immerse yourself into an open-to-sky steaming outdoor Jacuzzi, and you sit there in your swimmers while it’s snowing all around, and onto you. As experiences go, this will not fade from my icicled memory!

We also sang songs, told stories around the fireplace at a Kota dinner in a Lappish tent in the tundra wilderness. Grilled sausages on an open flame, with a simple dinner of pumpkin soup and reindeer meat and lots of mulled wine and hot berry juice. Surreal and fantastic. When it comes to meats, the region is known for its game. Adventurous foodies, we ate everything from elk to reindeer to moose to bear, and in these conditions it totally felt so much like Leonardo Di Caprio in The Revenant!

I wore more clothes than I have ever worn in my life at a time! There were a lot of firsts for a tropical inhabitant like me. I really could go on and on... everyday life and even the way they clear snow off the streets which I found fascinating! Scandinavia in the winter should be on everyone’s bucket list! I cannot wait to get back! Oh, and incidentally, we did get a glimpse of those magical northern lights too!
— The writer loves to travel, is a shutterbug, designer, musician and founder of a music brand.