Kicking her way to success

When asked about her future goals, she simply smiles, saying, “I just want to be successful in both sports and academics.” 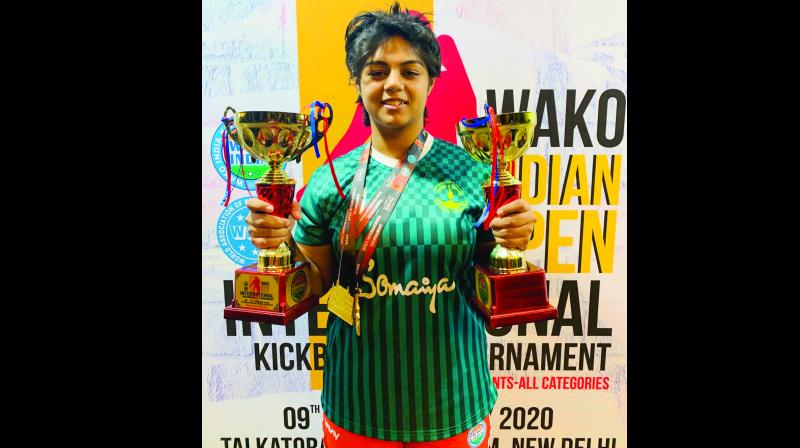 When it comes to representing the country internationally, Mumbai kids certainly lead the list, and the latest to make an entry is 18-year-old Vidhi Tekchandani. The final year student of K J Somaiya College of Science and Commerce represented the country at the Wako Indian Open International Kickboxing tournament which concluded in Delhi recently. And, the young athlete bagged two gold medals in the Kick Light and Light Contact formats for women above 70kg category.

“I feel on top of the world. I worked very hard for this competition, and winning this makes me feel that all the hard work and dedication has paid off,” says Vidhi, who first started practicing the sport in 2014.  “I just love sports, but more than any sport, I was eager to do kickboxing and one day it became my life,” she gushes before informing that she’s always wanted to be a sportsperson. In six years, she has won several other medals in various state and national-level tournaments.

However, coming out with flying colours was not easy, as the kickboxer reveals it requires a lot of practice and diet control to maintain the weight according to the requirements of the tournament. “If you want to be fit and represent your country, then you have to find time even on the busiest day,” she says after revealing that she practices every day for five hours along with her regular studies.

While many parents feel apprehensive to let their kids choose a sport, which has a risk of injuries, Vidhi feels that she has been exceptionally lucky. “Injuries are bound to happen but I can’t give up. I take proper nutrition and rest – that helps me recover faster,” she says. Vidhi further adds that the win could not have been possible without the unconditional support from her parents. “There is an army of people who are responsible for making it happen – my family, friends, college for allowing me to practice and my coach,” says the athlete. Although, she rues that she didn’t get much support from her school. “As much as my parents and I were keen on pursuing kickboxing in the early days, I didn’t get enough encouragement from my school. There wasn’t much support from the school management,” she asserts.

When asked about her future goals, she simply smiles, saying, “I just want to be successful in both sports and academics.”