With pollution levels in the capital worsening, the advent of e-bikes would stem the burning of fossil fuels. 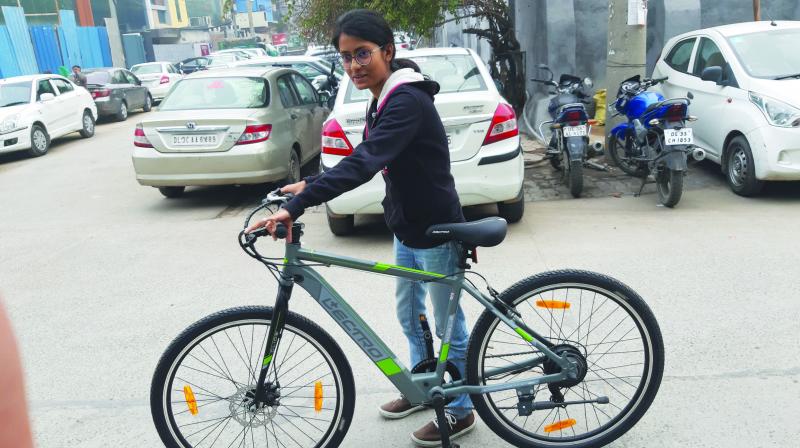 E-bikes being recently launched in India, the creators and innovators hope to address the problems of pollution and bring about a healthy lifestyle for Delhiites.

Pollution in recent times has been on a high especially in thecapital.  The capital’s air quality index numbers are in the hazardous category. The pollution levels are high due to the increase in the number of cars. But after every long tunnel, there is light. E-bikes being recently launched in India, the creators and innovators hope to address the problems of pollution and bring about a healthy lifestyle for Delhiites.

According to a study conducted by TERI (The Energy & Resource Institute), which found that 50% substitution of two-wheeler and four-wheeler trips by bicycle under the average distance of 8 km, will lead to a personal fuel savings of Rs 27 billion. Similarly, 50% substitution of two-wheeler and four-wheeler trips for short distances will result in annual health benefits equivalent to `1,435 billion on account of increased physical activity and `241 billion due to reduced air pollution. While, 50% substitution of walking trips above the average distance of 3.5 km will result in travel time-savings worth Rs 112 billion by marginal unskilled workers.

If motorised private transport is substituted with cycling, the noise pollution would reduce, road safety would improve and provide recreational value to users.  Pankaj Munjal, chairman, Hero Motors Company, believes that e-bikes have a strong potential in India, as there is a growing segment of fitness and health-conscious population. When asked about how the idea of e-bikes germinated, he says, “The idea to invest strongly in the e-bike segment and form strategic alliances with Yamaha and Mitsui to scale up innovation comes from a desire to drive a change in travel habits of Indians and encourage them to adopt a greater use of e-bikes, especially for short distance travel.” He says that the significant challenges to the growth of e-bikes in India were the behavioural patterns of urban residents as well as lack of adequately safe infrastructure for the use of cycles. He then adds, “Apart from this, another challenge before us is to focus on innovation to lower product costs so as to make e-bikes much more accessible.”

He highlights that e-bikes have zero dependence on fossil fuels, zero emissions and pollution. They can garner a 25-km/hour speed and can become a major mode of transport for people who travel less than 10 kilometres to work every day. “What we need is safe cycling infrastructure, which will play a crucial role in increasing the level of bicycle ownership among choice users. We also need policy initiatives such as car-free days, dedicated bicycle days to promote use of cycles,” he says. He says that electric cars and e-bikes must be used hand-in-hand to improve the environmental condition of the cities. While electric cars will take at least 2-3 decades to become a functioning reality in India (given the need to create massive infrastructure for them), e-bikes are already readily available in the market. “We hope to bring about a behavioural change with respect to transport and move towards a healthier, greener and congestion-free India,” he says in response to the influence of e-bikes in the longer run. He was upbeat about the public taking serious note of the concern of pollution. But he rues that not many people have changed their way of living to make a difference to the situation. “Very few people have given up using cars. Lack of safe cycling infrastructure is a major concern that prevents people from adopting cycling outside recreational purposes,” he says. When asked about the one word of advice, he would give to youth; he
says that one must be the change one wants to see.