Just another way to love!

Bisexuality is no longer a taboo subject as films and web series are embracing characters with diverse sexualities. 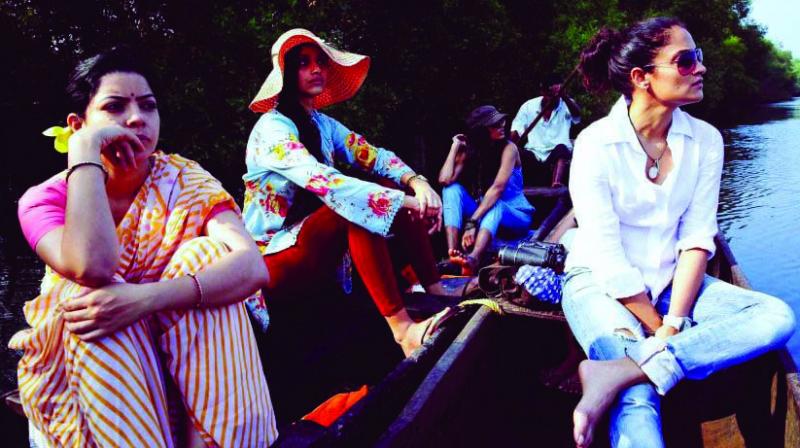 A scene from Angry Indian Goddesses, a film in which one of the characters is a lesbian

Bisexuality is no longer a topic that is swept under the carpet. Now many web series and movies like Four More Shots Please!, Angry Indian Goddess and Tully depict actors playing bisexual characters,with comparative ease. And with India decriminalising the LGBTQ community, things surely have moved forward. Being bisexual is no longer considered taboo as today millenials see it as just a different way to show the love you feel. Talking to people from the film fraternity, an activist and a psychologist we find out what brought about this change.

She adds, “I think this entire movement started with the LGBTQ community being legalised and accepted in the US that led to other countries too accepting them. Being bisexual is just love in a different form. Since we are exposed to the US culture, the change came in. With web series and shows portraying bisexual characters; it gave a chance for many people to come out of the closet. Having big personalities like Ricky Martin and Ellen DeGeneres openly admitting their sexuality has inspired people. Even the film and TV medium are kind of normalising this. It's not a taboo topic anymore.”

However, for filmmaker Faraz Arif Ansari there really hasn’t been the right interpretation of bisexuality in Indian cinema. “I tried to touch upon it with my short film Sisak that has now won 59 awards, with which people had a lot of issues. People objected showing a bisexual man falling in love with a gay man. Although it’s a silent film, the interpretation was formed because he is married in the film. In Indian cinema, we have rarely had a right interpretation of the lesbian community and the gay community, and bisexuality is even more complex to get to at this point in time. We have been trying to chase the wrong perspective of LGBTQIA community, we’ve been trying to stereotype them all these years,” says Ansari.

He further makes a point asking as to how many people are subscribing to such series and whether they are the right target audience. “My point is that are these the right people whose conversation needs to be changed?  The content is niche and so, only a certain section of people, who are living the life they want to, are watching these things. The real conversations need to happen outside those spheres. It needs to happen only in the mainstream where sexuality is not just a part of the conflict, where all the stories need not be about coming out and acceptance; there is a world beyond that as well,” he adds.

Here director KM Chaitnaya points out that bisexuality is not something new in India, it’s just that we have forgotten about it. “If you look at our temple carvings, things like being bisexual were not a taboo. It was only after repeated foreign invasions, rigid views on what is right and wrong in sexuality were imposed on us. Hence we began to consider being bisexual a taboo. Nowadays that attitude has changed and we have realised that a person’s sexuality is his or her own choice. Homosexuals and bisexuals make up a significant per cent of society. We have realised that it is just different ways of showing love.”

Nithya Nanda an LGBTQ activist feels that although we have achieved much in this area, we still have a long way to go. He says, “Even though the community has been made legal, there is still a part of the society that attaches a stigma to being bisexual. They are still conservative with prejudiced thoughts. They are still stereotyped, that a man should be with a woman and vise-versa. I have seen many bisexual people who are quite open. While they are accepted by their friend circle, it's the parents who don’t accept them.”

Stressing on the fact that for years the community has been used as a comic relief in films, which has caused huge damage to the community, it is about time the right portrayals are shown. “It is a very vast community and sexuality as a spectrum, I don’t think we make mainstream films that are complex enough to even delve into something which is so natural. The first step towards inclusion should not be hesitation. There is an elephant in the room that everyone knows about and you need to be very honest with the portrayals. I think we are ready for it, the point is who is going to take the first step, especially when there is so much money involved to make a big film,” he concludes.    —with inputs from Shalkie