All my life, my father was controlling my story. This book freed me from his story and I am now living in my story, says Eve Ensler. 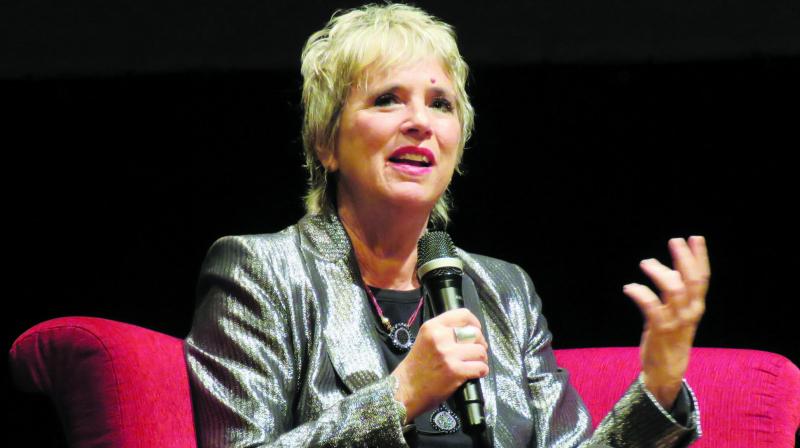 The Vagina Monologues’ playwright, Eve Ensler, was in the city to launch her latest book and her campaign that calls for an end to violence against women.

Eve Ensler has spent a major part of her life waiting for an apology. Globally recognised for writing The Vagina Monologues and for her fiery feminist activism, Ensler had borne wounds of child sexual and physical abuse by her own father. “When I was five years old, my father began to sexually abuse me. At 10, I started to resist, and then he became really violent towards me for many years, almost murdering me twice,” said Ensler, matter of factly, to a group of journalists at Royal Opera House recently. The apology that she had long fantasised about never came. And thirty-one years ago when her father died, the apology cemented in her world of fantasy, until now.

Written from her father’s voice to her, Ensler’s latest book, The Apology, is a heart-wrenching but absolute necessity of the time that attempts to serve as a blueprint for sexual abusers to apologise to their survivors. “I have never heard a man, who has committed sexual violence or physical violence, making an apology for what he has done. And when I say an apology, I don’t mean ‘I am sorry, I hurt you’ or ‘I am sorry, I have made you feel bad’ – that’s not an apology,” she says. At a time when MeToo movement has opened the dam gates to an outpour of stories, Ensler began to wonder how men are actually going to change if there is no recognition of what they have done. Thus creating a template for other men to follow, The Apology is Ensler’s way of healing from the ghosts of the past and the monsters of the present.

At the launch of her 2020’s chapter of her campaign that calls for an end of violence against women,  One Billion Rising,  organised by the city-based NGO Akshara Foundation, Ensler opened up about the architecture of the apology. “The first step for the perpetrator is self-interrogation and self-investigation, and looking into their childhood and seeing what happened that made him the kind of man who is capable of raping, groping, harassing and incest,” she says. As just another victim to patriarchy as women, Ensler believes that in childhood, boys are robbed of their tenderness, emotions and their freedom to cry, and when they are awarded power and privilege later in life, a lethal combination is brewed.

“My father was born 15 years later after the last child in the family. He accidentally became the miracle, the adored son. But adoration is not love, adoration is projection of someone idolising you, giving you a mandate. There is no room for doubt, tenderness, vulnerability, you desire for nurture – my father was that,” she illustrates. Going on further, she extrapolates that when she was born, her father was overwhelmed by love and tenderness which he didn’t know how to process. “Being robbed of how to deal with it, he did is what most men do, he sexualised it and as a result, he sexually abused me,” she reveals.

The next step calls for a detailed accounting of what the perpetrator has done to the survivor. “Liberation is in the details, and that detailed accounting puts the perpetrators against what they have done,” she says which further allows them to analyse their own intentions. The third step is to feel what the survivor felt – physically and mentally, and the short-term and the long-term impact on the victim. And the final step is to make amends. “To actually take responsibility for your actions and in that process, you will indicate that you are actually becoming a person who is not capable of ever doing what you did,” says Ensler.

Even though writing the book might have been one of the toughest things that Ensler have done, she is sure that she has found that solace and closure that she had been searching for all her life. “All my life, my father was controlling my story. This book freed me from his story and I am now living in my story,” she concludes.