Twist in the tale

This theatrical rendition of Devdas is being narrated from Chandramukhi’s perspective. 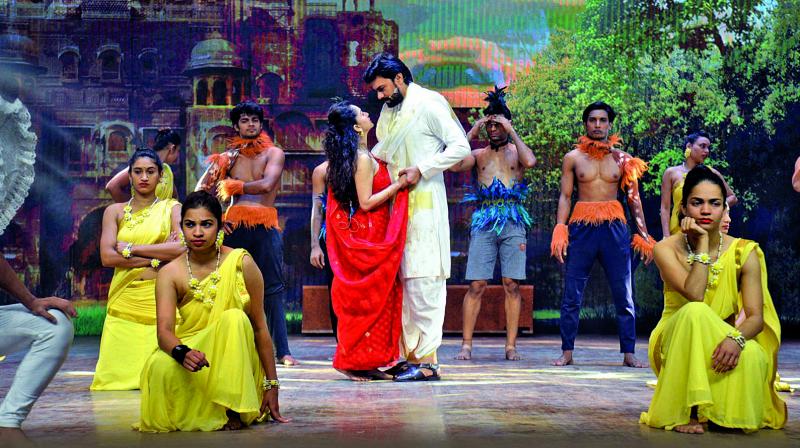 The director further emphasises that the play is not an interpretation but a re-imagined version of Devdas.

When noted Bengali novelist Sarat Chandra Chattopadhyay wrote Debdas in 1917, he wouldn’t have imagined his novel to be adapted a dozen times by celebrated filmmakers and playwrights. This story of unrequited love ends with Devdas landing at his soulmate Paro’s doorstep to breathe his last. While this heart-wrenching ending has been portrayed many times, one is often left wondering what happened to Chandramukhi, the courtesan who fell in love with him. Saif Hyder Hasan’s theatrical rendition of the most famous love saga in Indian literature picks up from here and tells the story from Chandramukhi’s point of view. When Director Saif Hyder was researching the script, two questions popped up: What happened to Chandramukhi and what happened to Paro? It’s this thought that Saif found intriguing and so, decided to tell the tale from Chandramukhi’s perspective rather than an outsider’s. “The era and ethos of the characters remain the same. I have included entire elements of the book, everything that you would be expecting from the book but it tries to answer a lot of unanswered questions too,” he says with a smile.

It starts from a point when Devdas is no more. “Whoever has watched or read Devdas, has wondered what happens to Chandramukhi and Paro after his death. Our play shows what becomes of Chandramukhi,” says Manjiri Fadnis who essays the role of Chandramukhi.

Coming to the book, Saif is of the opinion that none of the portrayals so far have done justice to one of the most complex characters of the story.  “The character of Chandramukhi written in the book is brilliant. In films, she is longing for Devdas. In the book, she is a social worker who gives up her profession and works for the destitute and landless people. But she has a modern audacity to her which I have tried to present,” he says passionately.

The director further emphasises that the play is not an interpretation but a re-imagined version of Devdas. “My Devdas runs parallel to the Krishna-Radha story. Devdas is Krishna, Paro is Radha and Chandramukhi is Meera. That is the major re-interpretation,” says Saif. As Manjiri puts it, there are two shades to the character of Chandramukhi. “One before she met Devdas and one after she falls in love and how she becomes a different woman after his death. She dedicates her life to someone who has never even touched her, almost becoming like Meera,” she explains.

To understand the nuances of a hapless lover, actor Gaurav Chopra  - who plays Devdas – gave up on his vanity and refrained from watching legendary Dilip Kumar or Shah Rukh Khan’s Devdas. “It is a new angle. There are surprises and answers to questions that you might have had in the past portrayals. Is it about a self-indulgent, over-sensitive guy who is making decisions purely on emotions and not logic?  Or is it a beautiful tale of somebody who is riding on top of his passion? You have to understand his passion to know why he does what he does and that is what this show is about,” says Gaurav.

The role of Devdas’ Paro is played by Sukhadha Khandekar who will be bringing in love, passion, rhythm and beauty as shown in the various narratives. “Only the angle has been changed, Paro is who she is. The only difference being, the director and I have rendered this Paro from the length of her hair to her toenails,” she says.