Rare 'Raj Pink' diamond fails to get auctioned at Geneva 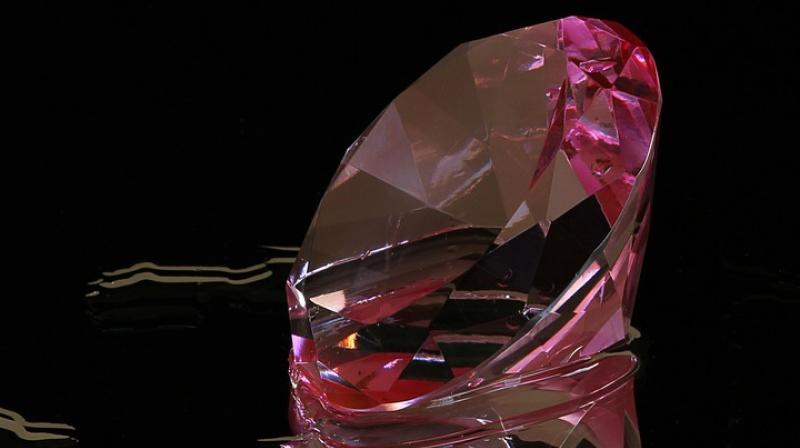 Geneva: “The Raj Pink”, the largest known diamond graded “fancy intense pink” for its rare color, was among several major jewels stranded on the auction block on Wednesday at Sotheby’s sale in Geneva.

The cushion-shaped stone, weighing 37.30 carats and mounted on a ring, was billed as the star lot at Sotheby’s semi-annual jewelry sale in the Swiss city. The pre-sale estimate for the diamond, found in South Africa in 2015, was $20 million to $30 million.

“It was not sold,” David Bennett, worldwide chairman of Sotheby’s international jewellery division who conducted the auction, told the crowded sale room.

Other major lots were left on the block, failing to meet the secret reserve price set by their sellers.

They included a blue diamond ring by Moussaieff, where the last bid was 12.4 million Swiss francs, and a pair of yellow diamonds that formerly belonged to the German princely family of Von Donnersmarck, which reached 7.8 million Swiss francs but failed to find a new owner.

Only 303 of the 349 lots found new owners, according to Sotheby’s figures. In all, the sale netted 77.9 million francs.

A Harry Winston light pink diamond ring, described as an “absolutely sensationally beautiful stone” by Bennett, brought the strongest price of the night.

It sold for 12.6 million Swiss francs to a telephone bidder who purchased it from a European noble family which owned it since the piece was made by the New York jeweler around 1970, Sotheby’s said.

“Pieces must be exceptional to sell today at the same level as two years ago,” Eric Valdieu, a Geneva-based jewelery dealer formerly of Christie‘s, told Reuters after the auction.

The Raj Pink was not an easy stone to sell, he said, adding: “It was a modern, recent stone and not a 10 out of 10 in terms of its color and form. It had no history,” Valdieu said.

Another prominent dealer told Reuters: “It’s a big disappointment. The timing was not good.”

At rival Christie’s on Tuesday night, an emerald and diamond necklace set with the largest flawless white diamond ever to come to auction sold for a world record 33.5 million Swiss francs ($34 million), the star lot at its Geneva sale.